Schools do a poor job of teaching about America’s legacy of white supremacy, according to a scholar who researches racial discrimination.

When it comes to how deeply embedded racism is in American society, blacks and whites have sharply different views.

Many blacks and whites also fail to see eye to eye regarding the use of blackface, which dominated the news cycle during the early part of 2019 due to a series of scandals that involve the highest elected leaders in Virginia, where I teach.

The donning of blackface happens throughout the country, particularly on college campuses. Recent polls indicate that 42 percent of white American adults either think blackface is acceptable or are uncertain as to whether it is.

One of the most recent blackface scandals has involved Virginia Gov. Ralph Northam, whose yearbook page from medical school features someone in blackface standing alongside another person dressed in a Ku Klux Klan robe. Northam has denied being either person. The more Northam has tried to defend his past actions, the clearer it has become to me how little he appears to know about fundamental aspects of American history, such as slavery. For instance, Northam referred to Virginia’s earliest slaves as “indentured servants”. His ignorance has led to greater scrutiny of how he managed to ascend to the highest leadership position in a racially diverse state with such a profound history of racism and white supremacy.
Ignorance is Pervasive

The reality is Gov. Northam is not alone. Most Americans are largely uninformed of our nation’s history of white supremacy and racial terror.

As a scholar who researches racial discrimination, I believe much of this ignorance is due to negligence in our education system. For example, a recent study found that only 8 percent of high school seniors knew that slavery was the central cause of the Civil War. There are ample opportunities to include much more about white supremacy, racial discrimination and racial violence into school curricula. Here are three things that I believe should be incorporated into all social studies curricula today: 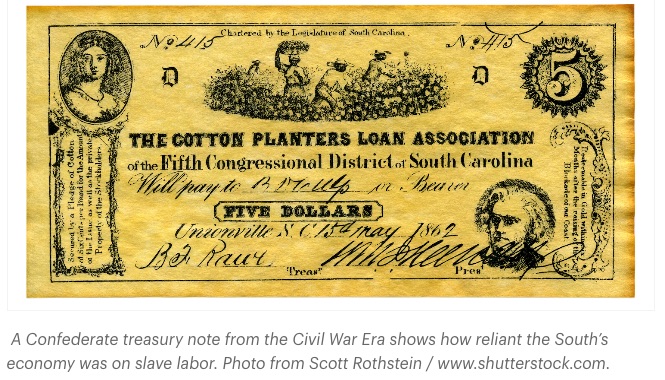 1. The Civil War was fought over slavery and one of its offshoots – the convict-lease system – did not end until the 1940s.

The Civil War was fought over the South’s desire to maintain the institution of slavery in order to continue to profit from it. It is not possible to separate the Confederacy from a pro-slavery agenda and curriculums across the nation must be clear about this fact.
file-20190221-195873-1q7mqxo.jpg

A Confederate treasury note from the Civil War Era shows how reliant the South’s economy was on slave labor. Photo from Scott Rothstein / www.shutterstock.com.

After the end of the Civil War, southern whites sought to keep slavery through other means. Following a brief post-Civil War period known as Reconstruction, white southerners created new laws that gave them legal authority to arrest blacks over the most minor offenses, such as not being able to prove they had a job.

While imprisoned under these laws, blacks were then leased to corporations and farms where they were forced to work without pay under extremely harsh conditions. This “convict leasing” was, as many have argued, slavery by another name and it persisted until the 1940s.
file-20190221-195886-4q0i0c.jpg

Southern jails made money leasing convicts for forced labor in the Jim Crow South. Circa 1903. Photo from Everett Historical / www.shutterstock.com. 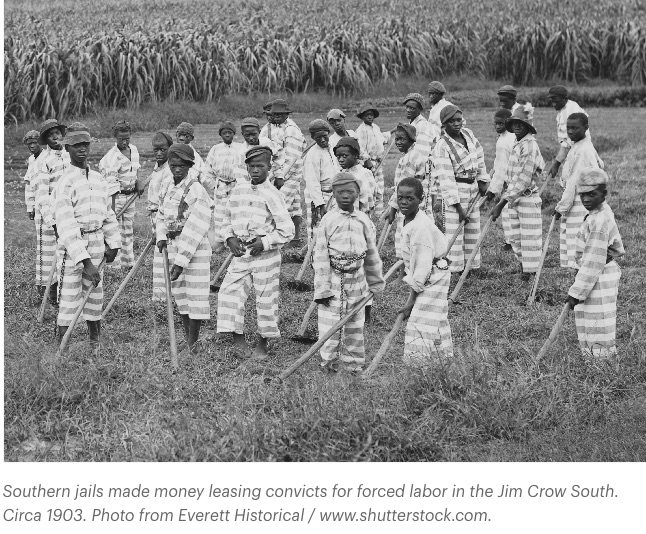 2. The Jim Crow era was violent.

While students may be taught about segregation and laws preventing blacks from voting, they often are not taught about the extreme violence whites enacted upon blacks throughout the Jim Crow era, which took place from 1877 through the 1950s. Mob violence and lynchings were frequent occurrences – and not just in the South – throughout the Jim Crow era.

Racial terror was used as a means for whites to maintain power and prevent blacks from gaining equality. Notably, many whites – not just white supremacist groups like the Klu Klux Klan – engaged in this violence. Moreover, the torture and murder of blacks was not associated with any consequences.

3. Racial inequality was preserved through housing discrimination and segregation.

During the early 1900s, a number of policies were put into place in our country’s most important institutions to further segregate and oppress blacks. For example, in the 1930s, the federal government, banks, and the real estate industry worked together to prevent blacks from becoming homeowners and to create racially segregated neighborhoods.

This process, known as redlining, served to concentrate whites in middle-class suburbs and blacks in impoverished urban centers. Racial segregation in housing has consequences for everything from education to employment. Moreover, because public school funding relies so heavily on local taxes, housing segregation affects the quality of schools students attend.

All of this means that even after the removal of discriminatory housing policies and school segregation laws in the 1950s and 1960s, the consequences of this intentional segregation in housing persist in the form of highly segregated and unequal schools. All students should learn this history to ensure that they do not wrongly conclude that current racial disparities are based on individual shortcomings – or worse, black inferiority – as opposed to systematic oppression.

Americans live in a starkly unequal society where health and economic outcomes are largely influenced by race. We cannot begin to meaningfully address this inequality as a society if we do not properly understand its origins. The white supremacists responsible for sanitizing our history lessons understood this. Their intent was clearly to keep the country ignorant of its racist past in order to stymie racial equality. To change the tide, we must incorporate a more accurate depiction of our country’s racist history in our K-12 curricula.

Noelle Hurd is the Scully Family Discovery Associate Professor in Psychology at the University of Virginia.

Black man calls police to alert them he’s doing his job. Here’s what happened next

AP Was There: Nelson Mandela released from...