3 White North Carolina police officers were fired after they were heard on camera making racist comments, including one threatening to ‘slaughter’ Black people in a new civil war

Three officers were fired from the Wilmington Police Department in North Carolina on Tuesday over racist comments captured on one of their in-car cameras.

The former officers — James Gilmore, Jesse Moore II, and Kevin Piner — had all been on the force for more than two decades.

The racist comments were accidentally recorded and then found during a routine audit, according to an internal report.

In one conversation caught between Moore and Piner, both can be heard using a racial slur against Black people multiple times, and Piner said a new civil war was needed to “wipe ’em off.”

Wilmington Police Chief Donny Williams on Wednesday said he would speak with the district attorney’s office about whether criminal charges would be brought against the fired officers.

Three North Carolina police officers were fired Tuesday for making racist comments about Black people in a video accidentally recorded on one of the officers’ in-car cameras.

Wilmington Police Chief Donny Williams announced the firing of the officers James Gilmore, 48; Jesse Moore II, 50; and Kevin Piner, 44, at a Wednesday press conference, saying their comments were “brutally offensive and deserved immediate action.” Each officer had worked on the police force for over 20 years.

An internal-affairs report on the trio, released Wednesday, said their racist conversations were discovered during a routine audit of dashcam footage from Piner’s vehicle on June 4. The report did not say when the conversations took place.

The camera had accidentally been turned on early one morning and subsequently recorded him having separate conversations with Gilmore and Moore.

According to the report, Piner is seen in the video first talking to Gilmore, who pulled his vehicle up next to him, and the two begin talking about the recent Black Lives Matter protests.

During the conversation, Piner tells Gilmore “the only thing this agency is concerned with is ‘kneeling down with the Black folks,'” according to the report.

“Gilmore then said that he watched a video on social media about white people bowing down on their knees and ‘worshipping Blacks,'” the report added.

Later in the video, after Gilmore leaves to respond to a call, Piner is seen receiving a phone call from Moore, and the two have a conversation about a recent arrest Moore had made of a Black woman.

Moore was also filmed calling one Black magistrate judge a “f—ing Negro,” complaining how the judge had questioned his decision to arrest the Black woman in the first place instead of committing her to a mental institution, the report said.

According to the report, Piner then reflected on current tensions, saying: “We are just going to go out and start slaughtering them,” Piner said at one point, using a racial slur. “I can’t wait.”

“Moore responded that he would not do that. Piner stated ‘I’m ready,'” the report said.

The video stopped a short time after. 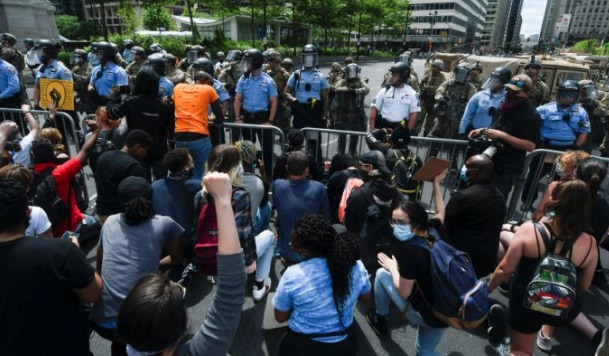 The internal-affairs report also detailed how the trio defended themselves after they were asked about the video.

Gilmore, who was heard complaining about white people “worshipping Blacks,” said he would have found a video of Black people bowing down to white people just as offensive.

“He stated that his problem with the video was the fact that the Bible states that ‘thou shall not bow to any idol,'” the report said. “Gilmore stated that he always treats everyone fairly regardless of their race.”

Moore defended himself by saying that he was off-duty when he made the call to Piner and was “just venting.”

“He advised that the call combined with the situation with the recent protests had him extremely stressed and he is very embarrassed about the things he said in the video,” the report said. “Cpl Moore stated that he doesn’t normally speak like that but he was feeding off of officer Piner and just venting.”

Piner also blamed his comments on the stress of the recent protests against police brutality, saying they had left him worried about the safety of his family.

The internal-affairs investigation determined that Moore and Piner broke their standard of conduct by using inappropriate jokes and slurs and criticizing the department.

While the report found that Gilmore did not violate the standard of conduct, Williams, the Wilmington police chief, overruled and said it was clear he was in violation.

At the Wednesday press conference to announce the officers’ firing, Williams said he would also report their behavior to the state standards commission and speak with the district attorney’s office to discuss criminal charges.

“There are certain behaviors that one must have in order to be a police officer, and these three officers have demonstrated that they do not possess it,” Williams said.

“When I first learned of these conversations, I was shocked, saddened, and disgusted. There is no place for this behavior in our agency or our city, and it will not be tolerated.”

Prosecutor decides not to charge officer who shot Black teen

The US  jailed and deported a Rwandan...