Four people who attended the portion of the Republican National Convention that was held in Charlotte, North Carolina, earlier this week have tested positive for COVID-19.

Mecklenburg County officials said Friday that two convention attendees and two individuals supporting the event have tested positive so far. The individuals have been told to quarantine and their known contacts have been issued isolation instructions as well.

Mecklenberg County Public Health said additional details would be published later in an “After Action Report” unless a “recognized threat” to public health requires their more urgent release.

RNC attendees and support staff took a total of nearly 800 COVID-19 tests during the Charlotte event, including prior to and immediately after delegates’ arrival.

But photos and video from the event itself, where more than 300 delegates gathered at the Charlotte Convention Center for an in-person roll call on Monday, show attendees largely ignored MCPH’s public health guidelines.

Few of the delegates wore masks as they stood close together, and some shook hands with one another. President Donald Trump and Vice President Mike Pence both attended in person, making surprise speeches. 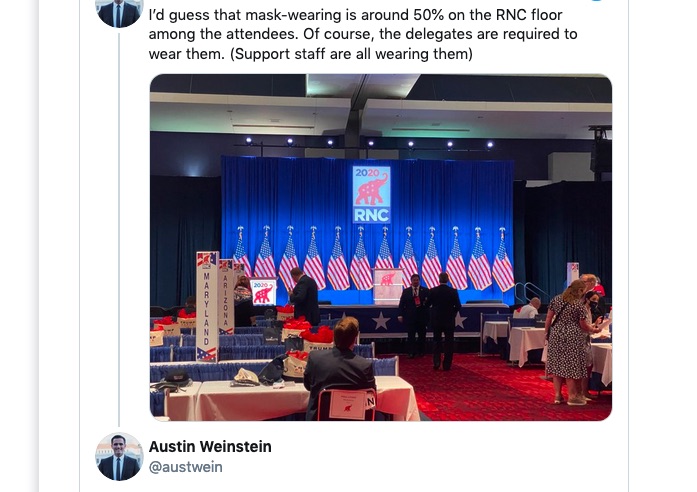 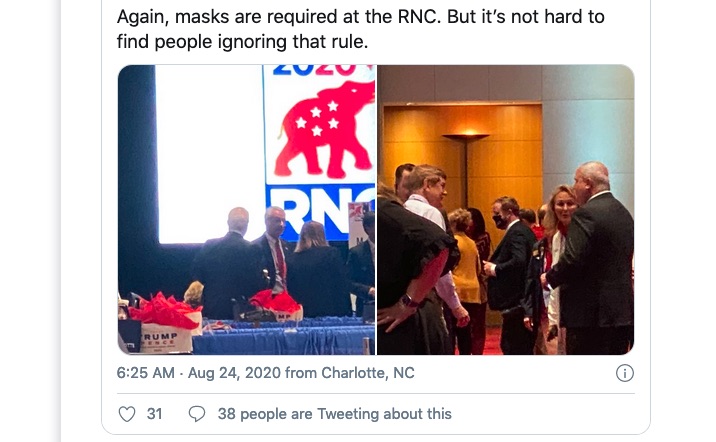 Mecklenburg Public Health Director Gibbie Harris told the Charlotte Observer that she expressed concern to the RNC on Monday after witnessing delegates’ conduct via the convention livestream.

“I have just shared concern about the lack of mask wearing and social distancing in the room at the RNC Roll Call Meeting,” Harris said.

“I have been assured that they are working hard to address these issues. All attendees agreed to comply with the requirements prior to attending and were informed that these requirements would be enforced.”

Nationally, at least 4,024 Americans died from COVID-19 during the Republican National Convention’s four-day duration this week.

A Picture they say is worth a thousand words. Republicans End a Convention full of lies and alternative Universe.

Chadwick Boseman reportedly got married in secret before he died