Home PoliticsAfrica News A Republican leader’s recent dump statement; How do we know slavery was bad if no one around to see it? She asked?
Africa NewsAsia NewsBreaking NewsBreaking News VideosLatest NewsPoliticsUS NewsWorld News

A Republican leader’s recent dump statement; How do we know slavery was bad if no one around to see it? She asked?

Martha Huckabay, the president of the Women’s Republican Club of New Orleans, came up with an interesting take on U.S. history this weekend.

Huckabay shared a clip of a segment in which a Louisiana state representative was interviewing with CNN’s John Berman about comments made by a Republican counterpart, Rep. Ray Garofalo, that students in his state’s schools should learn “the good, the bad and the ugly” of slavery.

Rep. Stephanie Hilferty reminded her colleague there was no “good” to slavery. Garofalo has since said that he misspoke.

“What is Stephanie Hilferty doing here? Why is she trying to trap a Republican and twist his words?” Huckabay wrote on Facebook. “How does she 100% know there is ‘no good to slavery’ if none of us were around during slavery?” 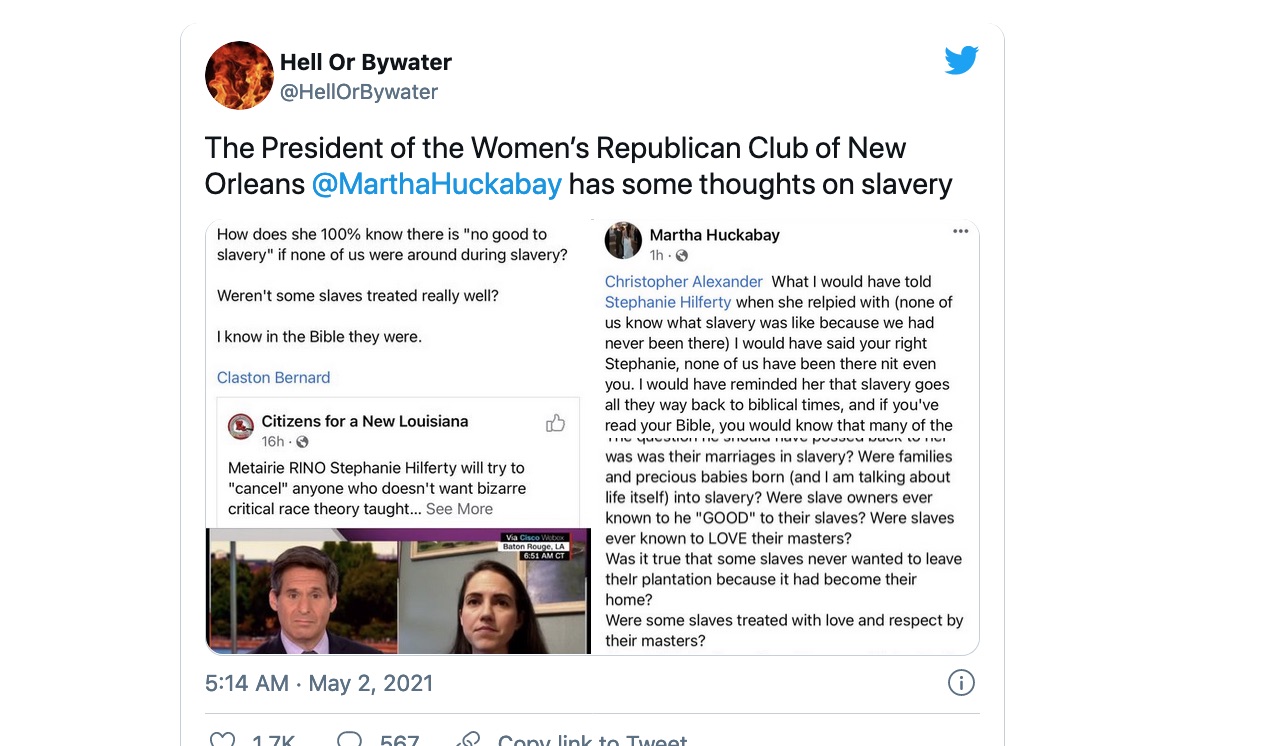 “Weren’t some slaves treated really well?” she noted. “I know in the Bible they were.”

The public post has little interaction. Some comments and several laughing reactions were shared. One user quickly reminded Huckabay we weren’t around to see what happened during slavery in the Bible either.

Last month, Garofalo, who is the head of the state’s education committee, made his controversial remarks during a debate on a bill to ban critical race theory from public schools in Louisiana. The state’s Black Caucus has moved to have him removed from the post.

“An apology is not enough,” said Black Caucus Chair Ted James of Baton Rouge. “The defense of systemic racism throughout our country is unarguably an issue, and the language of this proposal alone is enough to offend those of us working toward change.”

The backlash against his comments has prompted Garofalo to shelve the bill — for now.

North Carolina town is disbanding its police department. Some question the motives

Judge limits footage that family can see of deputy shooting.. Justice Denied to the Victim Family..

Redneck Rave’ Descends Into Crimes, Drug use, and...

A Nigerian Catholic priest on a mission to...