A Turning Point in Police and Minority Relations; As police officers have taken knee alongside protesters.

Police officers in N.J. took a knee and joined protesters in a moment of silence

Protest have swept across the country for nearly eight straight days, and millions across the globe are planing more protects. Many organizations have planned National Day of Actions, and millions of Americans are determined to forge a new direction as regards to police and Minority communities. Unlike other previous demonstrations and protects, the police chiefs, union, and other elected officials have come to the recognition that things shall never return to the same as before the death of Floyd.

For once, Police across the nation have begun to express outraged about Floyd’s murder and expressed shared human understanding and frustrations. Officers across the country have taken a knee alongside protesters and offered words of solidarity.

Protesters gathered outside of the Coral Gables station house in Miami-Dade County on Saturday, where police and protesters came together, taking a knee to join in a moment of peace and prayer. 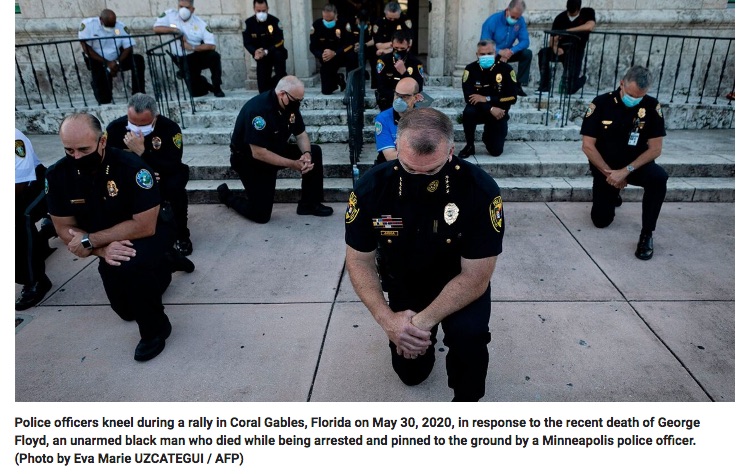 Police in Fayetteville, North Carolina, made a surprising move Monday during a tense standoff with protesters seeking justice in the case of George Floyd, who died after being restrained by police in Minneapolis. All 60-plus officers knelt before the marchers on Murchison Road.

The simple demonstration of solidarity by the police can do a lot to repairing the long broken relationship that was supposed to exist between communities and their police department. Many are hoping that the acts of solidarity demonstrated by policemen and women across the nations lead to a true and sincere dialogue that will bring true reform. No nation can succeed in the type of systematic racist criminal justice system that America has practiced for the past 400 years.

Another Black Man Who Said ‘I Can’t Breathe’ Died in Police Custody. An Autopsy Calls It Homicide.

How to Finally End Corruption in Nigeria;...