Home Latest News A white Professor called police on black student. He is suspended for what the student claim was racially motivated
Latest NewsLifePoliticsUS News

A white Professor called police on black student. He is suspended for what the student claim was racially motivated

A white professor at an Indiana university who called the police to his classroom after a black student refused to exchange seats has been suspended.

In the era of Trump, the United States has witnessed an astronomical rise in hate crimes typically targeting African Americans. The rise in police shootings and other racially motivated crimes has caused many in the African American communities to wonder what will manifest if Trump wins’ re-election.

Trump has signaled to his base that his assaults and rhetoric against minority groups in the country will increase if he wins re-election. He has additionally stated his intentions by his recent policy to prohibit 5 African countries from entering the US. He has made clear that his attacks and policies to limit Africans and other groups that aren’t from Sweden or Norway to the US is just starting.

Since Trump won the 2016 election, we have seen many times where white citizens called police to report African Americans for engaging in a daily routine tasks such as; Reading in the library, at Starbuck or kids simply playing in parks. Now professors are calling the police on students.
What most people don’t know or choose to ignore is that anytime a police is called to remove or solve any problem with young African American men, it usually does not end well. For whites in the US, this is not a life-threatening event. It’s merely an encounter with a peace officer. However, for African Americans, it could mean life or death, or a life-changing event, and people calling the police for no precise purpose know the unspoken rules and expectations. 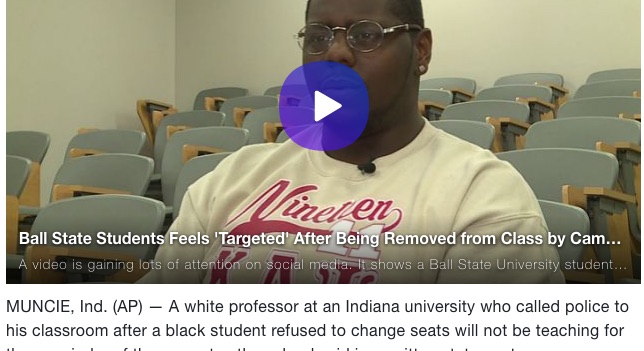 The student from Chicago who declined to switch seats, Sultan “Mufasa” Benson, characterized the teacher’s punishment as an insufficient “slap on the wrist.” Benson has said he believes he was singled out in class because of his race, and that he feared for his safety when police were called.
“I want justice, and a temporary leave for all of the policies he broke is still just the bare minimum,” he said. “But at least it’s a step forward in the right direction.”
“Our first concern is Borna’s rapid escalation of the situation and involvement of the police to resolve a disagreement about seating,” the letter said. “No disruption or physical threat existed. The use of police to get one’s way in the classroom is institutional violence. We support our students of color as they deal with the trauma of these events and navigate its fallout.”
The NAACP was also outraged, calling Bornu’s decision an example of “weaponizing the police against people of color impetuously.”
“The actions taken by Professor Shaheen Borna are yet the latest example of thoughtless behavior that yields traumatic and frequently detrimental outcomes,” the organization said in a news release. “Countless men and women throughout our nation have experienced discrimination, racial profiling, and over-policing at the hands of bigotry and intolerance.”

Black Families Came to Chicago by the Thousands. Why Are They Leaving?

As Symbols of the Confederacy Fall, Activists...