War is certainly not new on the continent of Africa, but wars that last a very long time and also have in addition extreme brutality are horrifying, nonetheless. While there are lot of wars that have been smoldering for some time, none have been as long-lasting and seemingly inescapable as the wars in the Democratic Republic of the Congo. Exploring the conflicts within this troubled nation shows that the lines have blurred between them, becoming a mire of terror that remains Africa’s longest war. I choose to write on this Africa’s longest war, because ending it should be a global priority of the new decade.

A Troubled Start to the DRC
It’s not an exaggeration to state that many countries are created by wars and that is the case with the Democratic Republic of the Congo. Formerly called Zaire, the Congo came into being during the First Congo War. This major civil war consumed the large nation and spilled over into other nations such as Sudan and Uganda.
Several other outside countries joined in on the fighting to fend off rebels that had come into their borders fleeing war, only to bring trouble with them or start it themselves. Eventually, the fighting became very severe and the government led by Mobutu Sese Seko was overthrown.
Even though this war only lasted between 1996-1997, it killed hundreds of thousands, displaced many more, and brought a new government into power that was not able to keep the peace. From this point on, Congo’s wars have been nearly constant.
The Second Congo War
Starting amidst the end of Congo-Brazzaville Civil War which started in 1997 was another major military conflict that came to be known as the Second Congo War, one that was far bloodier and would change the face of the nation.
Still bleeding from the first war that saw the overthrow of Mobutu, the new president of the DRC, Laurent-Désiré Kabila, turned on his supporters from Rwanda and Uganda and ousted the military advisors from the nation. These same individuals had supplied Kabila’s famous march to Kinshasa and felt that they had earned concessions from Kabila.
Namely, Rwanda wanted some measure of control in the young Congolese government. Uganda had a military presence in the nation. Both wanted to use their proximity to the Kabila government to prevent further incursions and rebellions on the borders of the DRC, which was still in the midst of skirmishes. This conflict itself was a result of wars past with the Hutus and Tutsis inside of Rwanda.
However, Kabila, not wanting to appear too friendly to foreign powers, decided to oust the leaders and thus started a long and bloody battle that started, ended, restarted, and continued for five years, itself spawning many other battles along the way.
The DRC, backed by Chad, Namibia, Angola, and Zimbabwe fought against the Rwandan and Ugandan armies, along with many rebel groups from within the country, pulling and tearing at one objective and then another.
On paper, the war ended in 2003 with peace accords, but the truth laid bare is that the war shrunk into the background because no battles during the time could match the horror of the Second Congo War. An estimated 5.4 million people were dead, the deadliest war since World War II and included President Kabila among those lost. His son, Joseph Kabila assumed office and would not leave until January 2019.
This was Africa’s Great War, a World War involving countries that did not smolder into a Cold War but kept going into the present day through other conflicts. 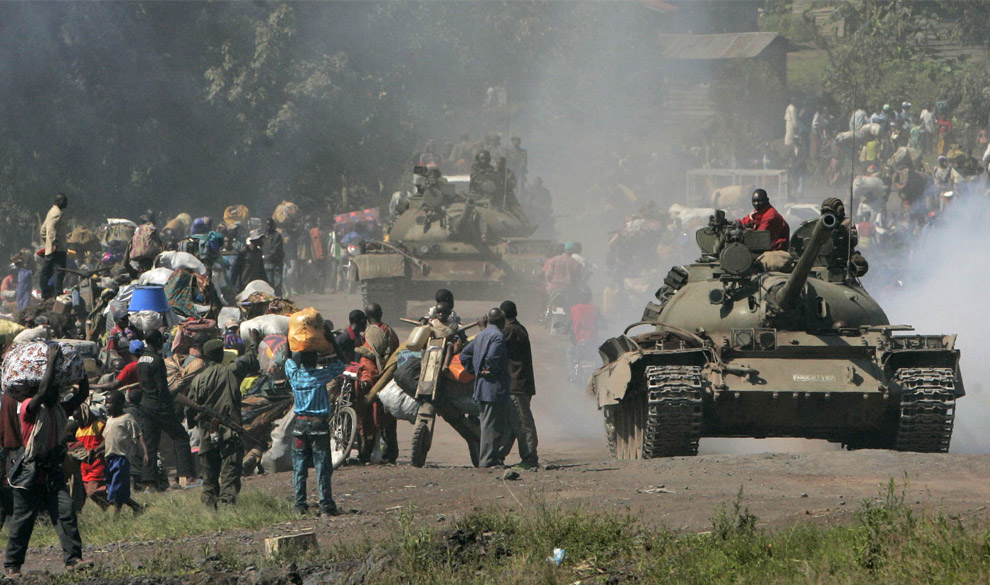 The War Changes Shape
While it is easy to categorize the wars as being separate, the fact of the matter is that the battles in the DRC never went away; they just swapped combatants.
The Transitional Government of the Democratic Republic of the Congo was set up and given the task of making a new government founded on a constitution. For a brief time, it looked as though the various ethnic groups and rebels would settle down and embrace peace on new terms dictated by the people of the Congo.
The same Hutu group that had organized in eastern Congo and was a matter of dispute between the Congo and Rwanda came into conflict with the FARDC, the military of the Congo. The area in which they battled was North Kivu and South Kivu, sections of eastern DRC. 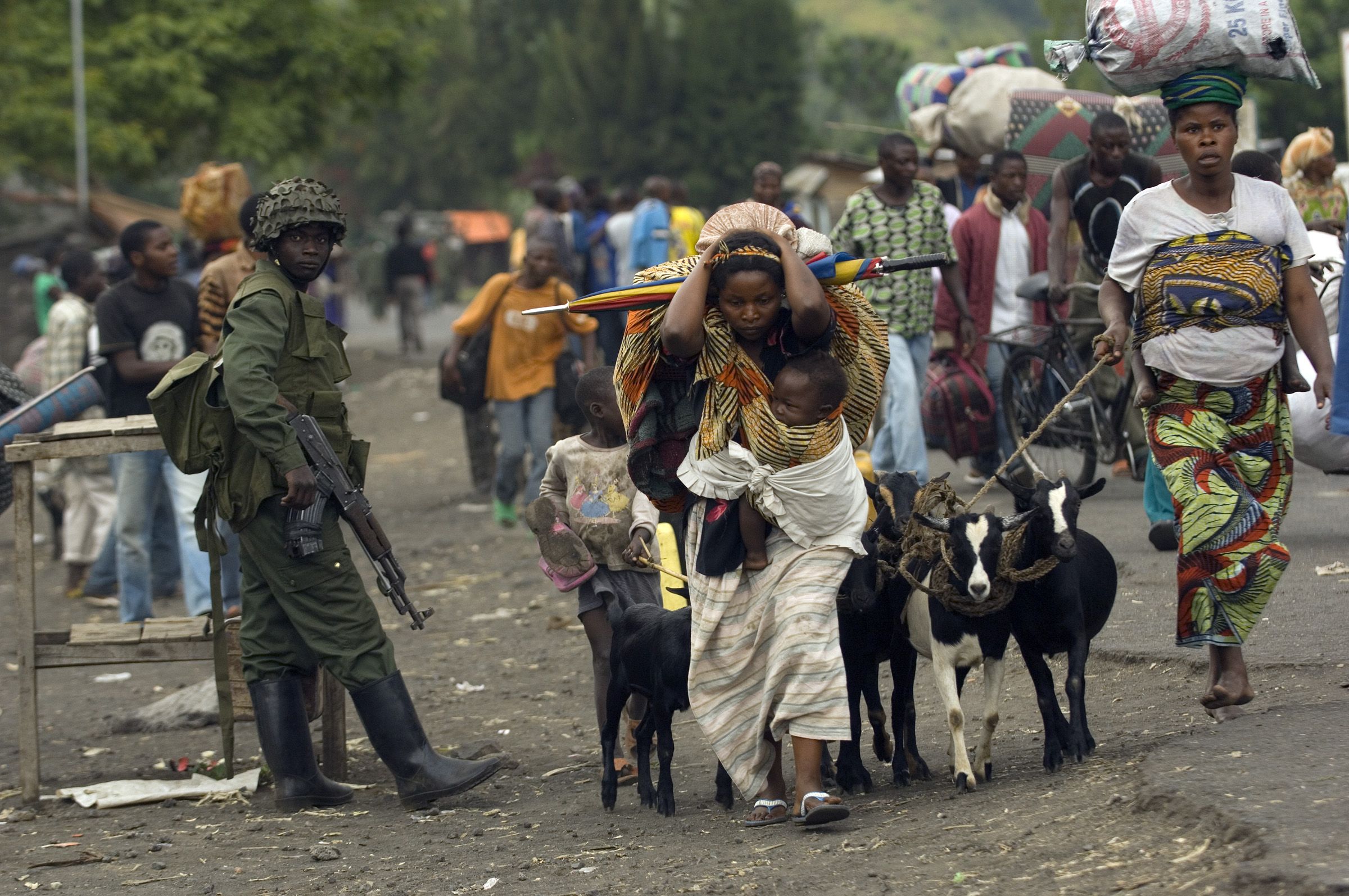 While the battles cost the lives of tens of thousands of people through the year 2009, the displacement of over a million people caused the deaths of untold thousands, estimated to be in the hundreds of thousands. These people died of disease, hunger, and thirst, but they would not be the last ones to fall.
In 2009, a peace treaty was signed after Laurent Nukunda, a warlord in Kivu, was captured by the Congolese and Rwandans, ending the worst of the battles but leading to further attacks in the future. Just as the Second Congo War had led to the Kivu Conflict, the Kivu Conflict would birth more fighting.
Enemies on All Sides
While the government of the DRC had instilled a measure of security in the nation throughout the early portion of the 2010s, the country was still loosely sewn together, unified by a flag but with multiple warring groups within.
The 2010s saw the Lord’s Resistance Army led by Joseph Kony become an insurgent group along with M23. The Katanga Insurgency and the Kamwina Nsapu Rebellion also took rise in parts of the DRC during this time. The one thing they have in common is their roots in the First and Second Congo Wars, which are sometimes believed to be one long conflict with a brief pause separating them.
Presently, going into the 2020s, the DRC doesn’t appear to be in as dire a situation as before. However, the fact remains that the country is filled with rebellious elements that all started at one point and continued to the present day.
While some may claim that other countries hold the unfortunate title of the longest war in Africa, a closer look at the chain reaction starting in Zaire and still going on today shows that Congo’s war is by far the longest, bloodiest war the continent has seen. So I will continue to hold my breath and hope to one day see the end of Africa’s longest war.
Afro World News Press writers; Osayande Aghaze

CHANGE OF SWAZILAND TO ESWATINI: PATHWAY TO...