África’s Richest Woman’ Out of Davos Well Before Report

DAVOS, Switzerland (AP) — The rapidly changing circumstances for Isabel dos Santos, widely known as “Africa’s richest woman,” is evident by her absence at the the World Economic Forum in Switzerland.

Instead of hobnobbing with world leaders in Davos, she is confronted with calls for her to be investigated for criminal corruption and is hotly defending herself on Twitter.

Forum organizers said the participation of dos Santos, daughter of longtime Angolan strongman Jose Eduardo dos Santos, at the forum’s annual gathering in Davos was cancelled this month, well before an investigation alleged that she bilked her country of more than $1 billion through unscrupulous dealings. Forum spokesman Max Hall refused to specify whether the forum or dos Santos cancelled her participation.

However, the forum says it’s maintaining its ties to one of the companies controlled by dos Santos.

The forum said dos Santos’s company, Unitel, “remains a partner.” Such partner companies can pay tens of thousands of dollars for the privilege of associating with the forum, which this week is hosting U.S. President Donald Trump and some 3,000 leaders of business, politics and civil society.

The controversy surrounding dos Santos increased this week when the International Consortium of Investigative Journalists and 36 media partners accused her of “two decades of unscrupulous deals.”

Dos Santos, her husband and their intermediaries put together a web of more than 400 companies in 41 countries that over the past decade were awarded consulting jobs, loans, public works contracts and licenses worth billions of dollars from the Angolan government, the investigation charged on Sunday.

The allegations were based on more than 715,000 confidential financial and business records provided by the Platform to Protect Whistleblowers in Africa, an advocacy group based in Paris, as well as hundreds of interviews. The cache of documents is known as Luanda Leaks, named for Angola’s capital, Luanda.

Dos Santos took to Twitter to dismiss the investigation as lies.

“The ICIJ report is based on many fake documents and false information, it is a coordinated political attack in coordination with the “Angolan Government”. 715 thousand documents read? Who believes that?#icij #lies”

Last December, a Luanda court froze dos Santos’s major assets, which include banks and a telecom company. The government says it is trying to recover $1.1 billion it says the country is owed by dos Santos, her husband and a close associate of the couple.

“Isabel dos Santos and her facilitators have to be investigated,” said Marques to the Portuguese New Agency, Lusa. ““We are talking about money laundering schemes that have harmed Angola and the Angolans and should be seriously investigated.”

One of the firms that worked with companies controlled by dos Santos was accounting firm PwC. Its CEO, Bob Moritz, told The Associated Press in Davos that it is conducting an investigation and has “ceased doing work for her and the organizations around her.”

“I’m personally tremendously disappointed in terms of the association we had, and the fact that we didn’t get out of that relationship earlier,” he said. “But I’m thankful that we’re getting out of it now.”

He declined to elaborate. PwC had longtime business dealings with dos Santos.

Jose Eduardo dos Santos ruled the oil- and diamond-rich nation for 38 years until 2017. Human rights groups have long accused the former president of stealing vast amounts of state money during his rule. Despite the country’s wealth, poverty is widespread among Angola’s 30 million people and its standards of health and education are abysmally low, according to U.N. surveys.

Isabel dos Santos said that she has amassed her fortune, estimated by Forbes Magazine at $2.2 billion, through hard work. She has said on Twitter that she will use all possible legal means to fight the legal actions against her and her companies.

In London, Angola’s Minister of Economic and Social Development, Manuel Nunes Júnior, said Monday that no one is above the law.

“We need to have a true rule of law in Angola. We believe that the rule of law is the essential element for the confidence of agents in the society in which we operate,” he said, according to Lusa.

In response to questions from journalists the Angolan minister said that “no one can be above the law, the law must be the same for everyone.”

This story was corrected to show that Prince Harry attended the opening of the investor’s summit in London. Prince William hosted a reception for the summit. 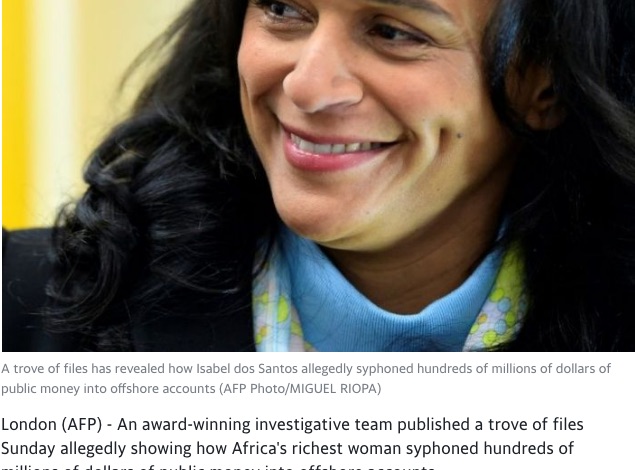 The New York-based International Consortium of Investigative Journalists (ICIJ) worked with newspapers such as Munich’s Suddeutsche Zeitung to reveal the “Panama Papers” tax haven scandal in 2016.

Angola’s prosecutors last month froze the bank accounts and assets owned by the 46-year-old businesswoman and her Congolese husband Sindika Dokolo, which she described as a groundless political vendetta.

“Based on a trove of more than 715,000 files, our investigation highlights a broken international regulatory system that allows professional services firms to serve the powerful with almost no questions asked,” the ICIJ wrote.

The group said its team of 120 reporters in 20 countries was able to trace “how an army of Western financial firms, lawyers, accountants, government officials and management companies helped (dos Santos and Dokolo) hide assets from tax authorities”.

Dos Santos took to Twitter to refute the claims, launching a salvo of around 30 tweets in Portuguese and English, and accusing journalists involved in the investigation of telling “lies”.

“My fortune is built on my character, my intelligence, education, capacity for work, perseverance,” she wrote.

She also blasted “the racism and prejudice” of SIC-Expresso, a Portuguese TV station and newspaper, and member of the ICIJ, “that recall the colonial era when an African could never be considered equal to a European”.

Dos Santos’s lawyer dismissed the ICIJ findings as a “highly coordinated attack” orchestrated by Angola’s current rulers, in a statement quoted by The Guardian newspaper.

Dos Santos herself told BBC Africa the file dump was part of a “witch hunt” meant to discredit her and her father.

Her father’s successor Joao Lourenco forced her out of the oil company after becoming president in 2017.

Dos Santos said on Wednesday that she would consider running for president in the next election in 2022.

The ICIJ investigation said Western consulting firms such as PwC and Boston Consulting Group were “apparently ignoring red flags” while helping her stash away public assets.

“Regulators around the globe have virtually ignored the key role Western professionals play in maintaining an offshore industry that drives money laundering and drains trillions from public coffers,” the report said.

One confidential document allegedly drafted by Boston Consulting in September 2015 outlined a complex scheme for the oil company to move its money offshore.

The investigation also published a similar 99-page presentation from KPMG.

None of the companies named issued immediate statements in response to the investigation.

Bill Cosby was set free because of...