AFTER THE ACQUITTAL OF KYLE RITTENHOUSE, AFRICAN AMERICANS ARE TAKING  REPUBLICANS AND WHITE SUPREMACIST’S THREATS OF VIOLENCE  SERIOUSLY

African American community activists and well-armed peaceful groups rallied outside the Georgia courthouse Monday where three White men are on trial for the fatal shooting of 25-year-old Ahmad Arbery, an unarmed Black man while jogging.

Recently the Republican party At a conservative rally in western Idaho last month, a young man stepped up to a microphone to ask when he could start killing Democrats.
“When do we get to use the guns?” he said as the audience applauded. “How many elections are they going to steal before we kill these people?” The local state representative, a Republican, later called it a “fair” question. The verdict in Kyle Rittenhouse further confirms what White supremacist groups across the United States are calling for.. The violent attacks of African Americans, Democratic Party members, and other minorities… Clear and simple: The Republican party wants another “civil war”.

As prosecutors and defense lawyers delivered their closing statements, dozens of members of BLM 757, Lion of Judah Armed Forces, and the New Black Panther Party marched outside the Glynn County Courthouse. 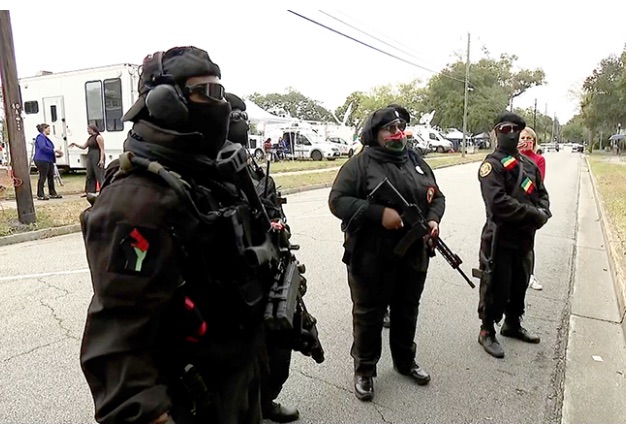 inside the courtroom, the persecutor in closing statements, prosecutor argued that the defendants pursued Arbery in pickup trucks for five minutes through the neighborhood on Feb. 23, 2020, and shot him because he was a Black man who refused to talk to them.

Members of the #blackpantherparty making their way to the front of the Glynn County Courthouse as closing arguments are underway in murder trial of three men accused in the shooting death of #ahmaudarbery
⁦@FCN2go⁩ pic.twitter.com/PXfFbbmPR8

New US attorney: Civil rights unit made for ‘troubled times’

Why Is America the Only Developed Nation...