Recently two white men chased down an innocent Black man that was jogging and shot him dead. Despite the uproar, the local police have refused to make any arrest.
On April 30, 2020, a group of Gun-carrying white militia protesters storms the statehouse demanding the state to reopen the business. For the past 3 years, there has been an exponential growth in the white militia and terrorist groups through the United States. 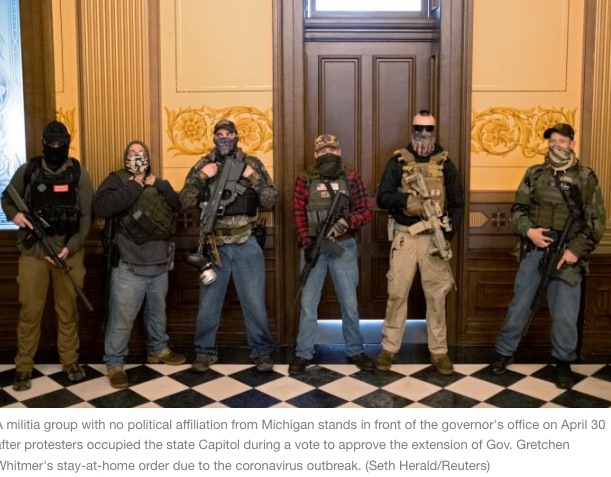 Some in the Black community have called for a confrontational approach to protecting their communities. Today Armed black activists escort lawmaker to Michigan’s Capitol after coronavirus protest attended by white supremacists.

For many observers, the images of armed militiamen in tactical gear at a state Capitol were an unsettling symbol of rising tensions in a nation grappling with the crisis. Others saw evidence of racial bias in the way the protesters were treated by police. How will the police react to armed Black men complying with the law is unknown?

President Donald Trump, who has been criticized in the past for condoning extremist views, called the protesters “very good people”. Will he call these armed Black men patriots? Don’t hold your breath. ..

Ahmaud Arbery: How the killing of an unarmed black jogger is drawing fresh attention to stand your ground laws