Arab and Muslim Communities Need To Talk About Anti-Blackness

The murder of George Floyd at the hands of a white police officer forced many communities to reckon with their role in anti-Black racism.

The conversation became more real for members of the Arab and non-Black Muslim communities in the U.S. when they learned that it was an employee at Cup Foods — a convenience store owned by a Palestinian American Muslim man — who called Minneapolis police on Floyd over a suspected counterfeit $20 bill.

American Muslims have no majority race, making them one the most diverse faith groups in the country. Nearly 3 million Muslims reside in the U.S., and more than a fifth of them are Black Muslims, a group that includes Black people born in the U.S. who converted from another religion or were raised Muslim, as well as immigrants from countries such as Somalia and Ethiopia. The African diaspora ― both from the slave trade and from voluntary immigration ― created African Arab populations in countries such as Sudan, Egypt and Yemen. And people from countries such as Mauritania often identify as all three: Arab, Black and African.

Black Muslims were among the first Muslims in the U.S., particularly those who were captured and enslaved in the 17th century. But they are often ignored in mainstream conversations about Islam. Now, the protests that have rocked the world in the weeks since Floyd’s death are also forcing non-Black, predominantly Arab and South Asian Muslims to evaluate their role in systemic injustice.

“This biggest issue for us as Muslims is not just Islamophobia; it’s systemic racism and white supremacy,” said Margari Aziza Hill, the co-founder and executive director of the Muslim Anti-Racism Collaborative, an organization that provides racial justice education and training within Muslim communities. “If we are committed to the project of decolonization, anti-racism, anti-Islamophobia, anti-oppression, we’ll be successful.”

Hill, who is a Black Muslim, added: “But if we’re only focused on Islamophobia, then we’re going to leave people behind. They’re going to leave me behind because I’ll still be subjected to racial violence.”
White Supremacy, Colonization and Aspiring Whiteness

Africans in Arab and South Asian countries can be traced back to the East African slave trade, through which millions of Africans were enslaved and sent to countries such as Pakistan and Oman, creating populations of African descent there. White colonial powers that invaded the Middle East and South Asia promoted whiteness as the dominant culture and installed systemic anti-Blackness.

Arab communities are still fighting remnants of anti-Blackness. Last month, a number of Arab celebrities in the Middle East donned blackface in a failed and grotesque attempt to support George Floyd and the Black Lives Matter movement. Blackface originated in the U.S., but it is still used as a caricature in Arab film and television. In countries such as Lebanon, an employment framework known as the “kafala” system ties the livelihoods of African, Afro-Arab, Asian and other migrant domestic workers to an Arab sponsor — a system that critics call modern-day slavery. In everyday life, some people still use violent language to label Black people as slaves, and beauty businesses still promote skin-bleaching products.

As Arab immigrants move to the U.S, some of these problematic attitudes come with them.

“People come to this country with some preconceived notions of what it means to be Black that might be really local to their context, whether it’s Lebanon or India,” said Su’ad Abdul Khabeer, the senior editor at Sapelo Square, an online publication that amplifies Black Muslims. “And then they’ve also received images of anti-Blackness through white supremacy. So when they come to this country, this is all in the mix.”

Immigrant communities in the U.S. have struggled with aspirational whiteness that Muslims have only recently begun to critique. For decades, millions of U.S. residents who are of Southwest Asian, Middle Eastern or North African descent have been categorized as “white” by the U.S. Census Bureau. Advocates have been working to change that, pointing out the erasure and loss of resources that result from being lumped in with the white population. But as of the 2020 decennial census, “white” is still their only option. 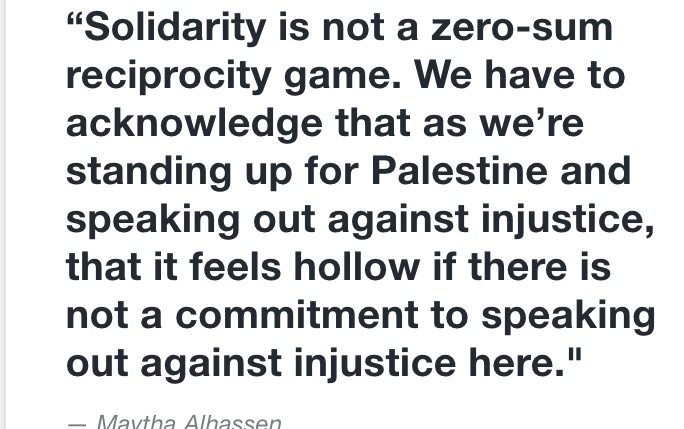 Black Muslims are often overlooked in conversations about Islam, and Afro-Arabs are rendered invisible in even the academic discourse about Arab politics and culture. The majority of contemporary research on Arabs is focused on countries such as Syria, Palestine, Jordan and Lebanon, neglecting Black Arab populations from those same countries and other countries in North Africa.

“There are various ways that non-Black Arabs contribute to the injustice that Black people experience in the U.S. If we don’t acknowledge that, then there is no substantial solidarity that can be made,” she added.
Confronting The Immigrant Store Owner Dynamic

Shortly after Floyd’s death, Mahmoud Abumayyaleh, the owner of Cup Foods, announced that his business will stop calling the police. That “almost always does more harm than good, even for something as harmless as a fake bill,” he wrote in a Facebook post.

The George Floyd incident has forced other immigrant and Arab store owners to reflect on their own relationships with the police, particularly in low-income, Black-majority neighborhoods.

Arab and immigrant store owners are going through an awakening and want to be better allies, said Ahmad Jitan, a community organizer for the Inner-City Muslim Action Network, a community organization and clinic with facilities on the South Side of Chicago. The network focuses on addressing structural, systematic and social injustice, and Jitan hopes his organization can help diffuse racial tension and model a healthier relationship for shop owners in majority-Black neighborhoods.

Jitan’s group has partnered with MuslimARC to create “Corner Store Witness,” an online curriculum for non-Black Muslim business owners about how to navigate their relationship with Black customers in an equitable and moral way.

The curriculum includes focusing on the need for store owners to go beyond transactional relationships to build personal connections in their neighborhoods. The program also encourages store owners to be more critical of the products they sell, such as liquor, nicotine and junk food, and to consider providing healthier options, such as fresh produce.

The program also asks owners to consider the physical makeup of their stores, such as ubiquitous glass barriers. Meant to protect those behind a counter from violence, they can also serve as a metaphor for the psychological barrier between owners and customers, Jitan said. 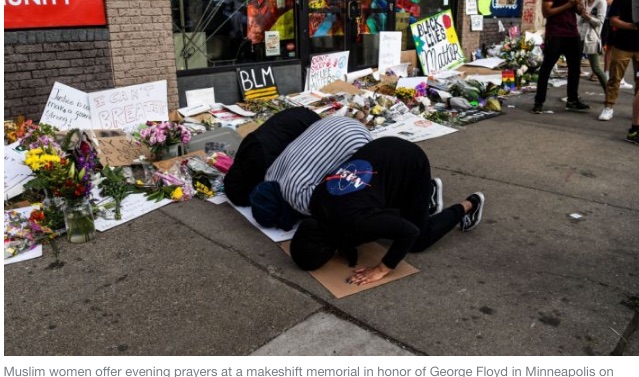 “Our work involves challenging those that are in a place that is rooted in anti-Blackness and challenging them and holding them accountable, as well as trying to support those store owners who are trying to do better and how they can create an alternative business model in these neighborhoods,” Jitan said.

But transformative change doesn’t end with store owners’ practices, Jitan added. Allies must also advocate to their broader community about the need for systemic change.

Hill’s organization has been inundated with requests from non-Black Muslim organizations in the weeks since Floyd’s death, she said. Thousands of people have watched online programming about addressing anti-racism in their community and are looking for resources for their own programs. She has also received a record-high number of requests to provide racial justice training for American Muslim organizations and to consult on statements and curricula.

Hill believes that the Muslim community is finally prioritizing anti-racist education. “As the most racially diverse religious community in America, we have a deep self-interest to stay together in these conversations,” Hill said.

Hill’s work connects the dots between white supremacy, anti-Black racism and Islamophobia, topics many mosques and Muslim conferences deemed too uncomfortable just a few years ago.

She urged non-Black Muslims to continue to hold one another accountable and to center the voices of their Black peers in faith.

“What we have to do is really think about how we help institutions do that transformational work that brings about racial equity,” Hill said. “If we want society to be better, then we have to think about all sectors being anti-racist.”

In June, two Arab American community organizers in New York and Boston posted a six-point guide in both Arabic and English outlining ways to resist anti-Blackness and to self-educate on Arab-Black solidarity.

The Arabs for Black Lives Collective, a new initiative spearheaded by a group of non-Black Arabs, also issued a letter calling on peers to “eradicate anti-Blackness and racism” within the community and to “confront our households, neighborhoods and places of worship.”

“We have to have the deep and often uncomfortable conversations with those that are around us to make sure that we’re stomping [anti-Black racism] out from our circles,” said Ahmad Abuznaid, the co-founder of Dream Defenders and a member of the group that wrote the letter.

For Black Muslims, the intersection between anti-racism and Islamophobia is a lived experience that they can’t set aside as easily as non-Black Muslims. But what connects them is the shared experience of faith as a means to uphold justice and equality.

“The Quran is really clear about this. There is no ambiguity,” Abdul Khabeer said. “As Muslims, we should pray, and we should look for those prayers as something that binds us and fortifies us as we fight.”