President Buhari: If Nigeria does not kill corruption, Corruption will kill Nigeria Sicilian Mafia: A fish rots from the head

President Buhari won his initial election in 2015 under the mantra of an anti-corruption crusader. Seven years later, it is obvious to the country and the world, that President Buhari obtained the presidency under false pretenses – a violation of section 419 of the Nigerian criminal code. The signs were clear before the onset of his administration as he was brought to power by corrupt men, was surrounded by and appointed corrupt men as his ministers, endorsed corrupt men in the highest echelons of his political party, and pardoned the most corrupt of men – two former governors from his ruling party who stole billions of naira of their peoples commonwealth. In summary, the Buhari Administration is a cesspool of iniquity.

President Buhari famously stated: I belong to nobody but yet I belong to everybody. . Seven years later, it is obvious to the country and the world, that President Buhari obtained the presidency under false pretenses. Unparalleled in the history of Nigeria, President Buhari has demonstrated a level of ethno- religious bigotry, nepotism, provincialism, and tolerance of terrorists, bandits, and kidnappers, never before seen in anyone who has ruled the country.

Nigeria is in dire straits, hindered and brought to its knees by a lack of accountability and corruption with impunity in all branches of government in the executive, legislative, and judiciary, and at all levels – federal, state, and local government. The cancer of corruption has metastasized to the parastatals and the private sectors. Since its independence, Nigeria has continued an inexorable slide backward in all indices of human development.

Our youth die in the desert and in the sea trying to escape hopelessness and lack of opportunity in our country. Those left behind see the greed, looting, and pillaging by their leaders, have no opportunities for economic empowerment and resort to internet scams, fraud, prostitution, banditry, and kidnapping to make ends meet. Thus innocent people both inside the country and globally are made to pay the price for the corruption of our leaders.

We have no other country. We must turn this country away from the precipice of disaster. And we need to do it now. Our population increases by 7.2 million a year and we are projected by the United Nations Population Division to be the third most populous country on earth, with a population of 730 million, – right behind China – by the year 2100.

To modify a phrase from Yakubu Gowon, our leader during the civil war – To save Nigeria now is a task that must be done. 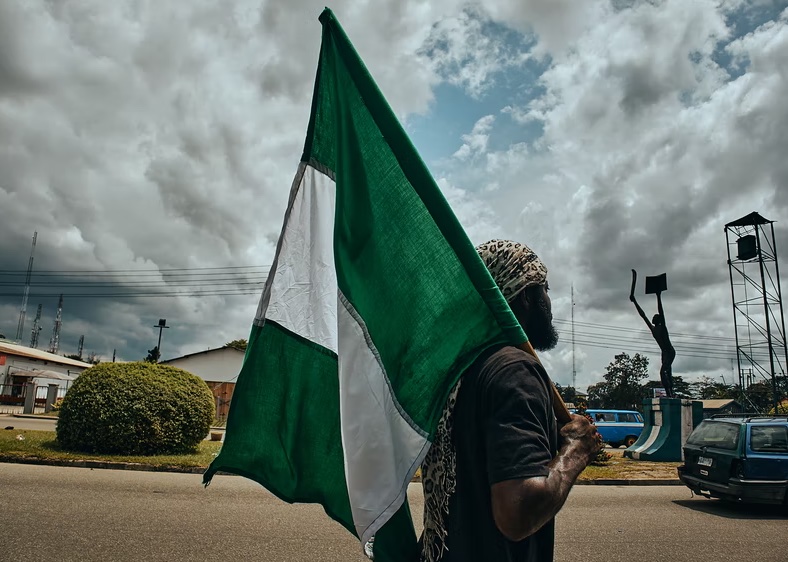 The salvation of Nigeria starts with the implementation of this manifesto.

The revolution of the almajiris in the North is upon us. The banditry, kidnapping, armed robbery, and terrorism are a consequence of 50 years of abuse, neglect, and abandonment, wherein, education, healthcare, roads, pipe-borne water was not provided in their communities, while the political elites looted, pillaged, and gorged themselves of the commonwealth of the people. Infrastructure was not provided. No means of economic empowerment was provided. Those little children from 50 years ago are now the monsters that we have created – the uneducated grownups with uneducated children that constitute the beggars, area boys, prostitutes, petty and hardened criminals, drug dealers, armed robbers, kidnappers, herdsmen, terrorists, many of whom are available recruits for Boko Haram, ISWAP and more to come.

If corruption can kill Nigeria, as declared by President Buhari, then aiding and abetting corruption should be a treasonable felony. The 1999 constitution that granted state governors immunity and granted legislatures the power to set their own pay and allowances as well as constituency projects to execute, institutionalized corruption is nothing short of a road map to perdition and a failure of the state.

The investigative agencies including the EFCC and ICPC consist of nothing less than medicine after death. These agencies have been corrupted and now weaponized against political opponents of the federal government. Thorough cleaning and reset of those agencies are required.

There is a need for an Office of an Inspector General (OIG) manned by honest men and women, to have an oversight function and root out waste and corruption at all federal, state, and local government institutions, departments, and agencies. Officials of the OIG will have the powers of the police to arrest and prosecute all those persons found to be aiding and abetting fraud and waste.

The immunity clauses for the governors must be removed from the constitution. But we cannot wait for that. There is an urgent need to hold the civil service accountable. Civil servants have no immunity in the constitution. No governor can steal, issue checks or divert millions or billions, from the people’s commonwealth without connivance and participation by the civil service including Ministers, Permanent Secretaries, Auditors, Auditor-Generals, etc. No monies will be released for any phase of contracts without proper accounting and auditing. All civil servants that fail to follow civil service guidelines, in issuing payments will be held accountable and imprisoned for aiding and abetting fraud.

Constituency project allocations for legislatures are just an avenue for theft and to corrupt them from their oversight function. They must be abolished. Legislators will not be permitted to set their own pay and allowances. Serving in the legislature is a service to the country and not an avenue for banditry. Legislators will be put on civil service pay and allowance scales.

Recovery: Whistleblowers will be encouraged to report and disclose monies and hidden assets of any government or parastatal officials in the last 50 years whose wealth cannot be justified by their salaries or legitimate businesses. All such officials will undergo a probe and a financial audit of their wealth. Such whistleblowers will be entitled to 10% of the recovery. Monies and assets found to be a product of fraud will be returned to the treasury and used to provide a living wage for the citizens. Such officials will also be imprisoned. Theft that rises to a level of a treasonable felony or economic sabotage will be punished by life imprisonment or execution.

Living Wage: A rising tide lifts all boats. We must engender collective prosperity and redistribute the wealth of the nation. By closing all leaks from corruption, and recovering monies derived from fraud, wages, pensions, and benefits for all workers including the military and security agencies, will be significantly increased. The value of the Naira will be increased.

Transparency – All requests, bids for, awarded contracts, and audits at all levels of government institutions, agencies, parastatals for both executive, legislative, and judiciary must be posted online within 48 hours. 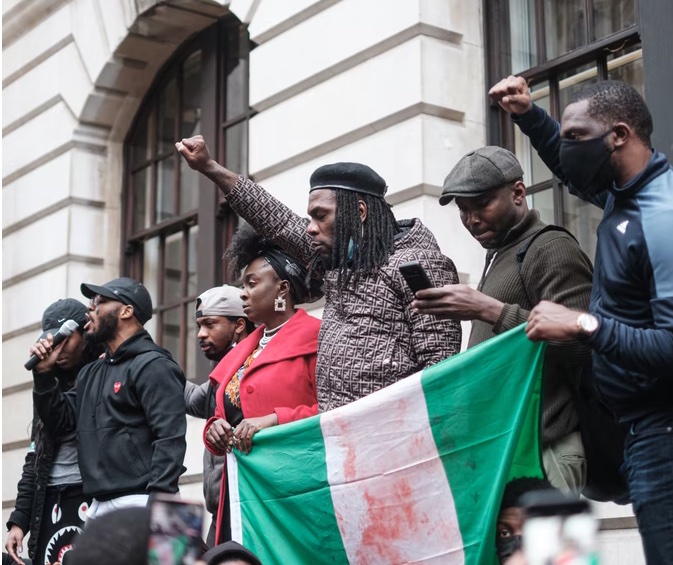 There can be no social stability or harmony without economic empowerment. The poor will neither eat nor feed their families sand. And when the poor cannot eat, the rich cannot sleep. China – Lifting 770 million people out of poverty since its reform and opening in the 1970s was not an afterthought. It was a product of state planning as their leaders know that lifting citizens out of poverty is a pre-requisite for social harmony. Even in the most capitalistic society on earth, the United States of America, a safety net is provided to the poor that includes Section 8 housing, Medicaid, and Food Stamps. Almost all citizens have access to utilities that provide economic empowerment including electricity, education, healthcare, roads, and pipe-borne water.

The national grid has collapsed several times in the last few months, will millions of people having no electricity for several weeks at a time. Even the lowest rung of the street hawker selling sachet water cannot keep her sachet cold or even charge her cell phone.

We must declare a national emergency for power generation to provide electricity to all citizens within the next six months. Reputable international contractors will be brought in to implement new power generators including, coal, hydroelectric, natural gas, solar, geothermal, and wind, within six months. The unemployment rate in the country in 2022, is a record high at 33.3 %. That means one-third of our working-age citizens are unemployed. The unemployment rate of our youths is 53%. This should be addressed as a national emergency. It is an absolute requirement that we provide power generation for economic empowerment. Small businesses cannot be viable if they have to provide and pay for generators and diesel to conduct their business. Our youths and our people are hard-working creative and full of entrepreneurial spirit. A government that has failed to provide a viable economy for its citizens should immediately cease to be an obstacle to the economic empowerment of those same citizens. Again when the poor cannot eat, the rich will not sleep.

The failure of our refineries to work for several decades is a testament to monumental fraud, abuse, and corruption.

All officials involved in such diversion and fraud will be probed and imprisoned if found guilty. A national emergency will be declared. Reputable international contractors will be brought in to rehabilitate the refineries within six months. Natural gas that is currently being flared and wasted will be piped and sold or used for power generation. Monies saved from ending subsidies will be used to provide a living wage for all citizens.

Security cannot just rely on the barrel of the gun. There can be no security without social justice and economic empowerment. We do not have enough police or bullets to provide security for our citizens. Neither have we provided living wages as well as adequate living and training conditions for our security officials

The wages, pensions, and benefits of all security officers will be increased. Their living and training facilities will be upgraded to world standard. Should anyone die in the course of service, their families will be taken care of, and all children given scholarships.

Abuse will not be tolerated. Any security officer found stealing, coercing, taking bribes, and/or violating the human rights of citizens will be investigated and imprisoned if found guilty.

There will be zero tolerance for herdsmen, bandits, kidnappers, or terrorists. Terrorists or kidnappers with hostages will be eliminated on the spot. Any officials diverting into their pockets, monies allocated for security, will be guilty of a treasonable felony and imprisoned for life.

The author; Sota Omoigui MD– Co-author, of Nigerian National Anthem and the inventor of Xchange Mall Super App!.  He can be reached at  (medicinechief@aol.com)

‘Get Out of MY Neighborhood’: Wisconsin Man Charged with Hate Crimes for Allegedly Trying to Force Black People Out of a Community by Terrorizing Them

A Black Family Entered Sheriff’s Office to seek help before ‘Heinous’ Murder-Suicide; Could the Sheriff have saved the children?

Will This Billionaire-Funded Think Tank Get Its...