Many Southern states in the US are witnessing an exponential rise in White Domestic Terrorist groups. For the past three years, there has been a certain degree of comfort and reluctance by local, state, and federal government law enforcement agencies to crack down on White Domestic Terrorist groups. Thus the recent murder of an innocent Black man while jogging was almost swept under the carpet until the graphic video emerged.

On May 3rd, 2020, Kita a sheriff allegedly led armed ‘Lynching White Mob’ to a black family’s North Carolina home. This armed lynching mob was allegedly led by a sheriff’s deputy in North Carolina is now facing criminal charges after authorities said he led a group of armed white mob gangs to the wrong house. 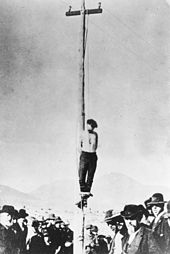 New Hanover County District Attorney Ben David said Friday that Jordan Kita, who worked in the New Hanover Sheriff’s Office, led an armed group to the home of Dameon Shepard, a senior at Laney High School in Wilmington, on May 3, according to James W. Lea, a lawyer for Shepard’s family who is preparing a civil lawsuit.

Shepard, who is black, says the all-white group tried unsuccessfully to force its way into the family’s Pender County home, about 20 miles north of Wilmington.

His mother, Monica Shepard, told the group they should leave, according to Lea.

“Coming to the door like that with a mob of people with guns, what do we expect? What were their intentions?” Monica Shepard told WECT-TV. “What if he was the person they were looking for or what if I was not home? What would’ve happened? I don’t want to have that conversation. I don’t want him to be a statistic. It’s scary.”

This wanton acts of Domestic terrorism and lynching have been on the rise, and many White Domestic Terrorist groups view the Trump administration as a silent partner in their hopes for a Race War. Its time for all goodwill Americans that truly love what American stands for to stand up and rebuke these racist and tribal sentiments. For more than six decades, Southern whites used lynching to enforce a post-slavery system of racial dominance, white officials outside the South as in the past are watching and doing nothing or little to stop this act of Domestic terrorism.

Arbery Video Was Leaked by a Lawyer Who Consulted With Suspects