The 55-year-old California senator and former state attorney general and San Francisco district attorney becomes the first Black woman to be named to a national political ticket by a major party. Harris is also the first Asian-American vice presidential nominee in history.

Biden announced Harris as his VP choice on Instagram Tuesday afternoon after informing several of the candidates that they were not selected.

“I have the great honor to announce that I’ve picked @KamalaHarris — a fearless fighter for the little guy, and one of the country’s finest public servants — as my running mate,” he said. “Back when Kamala was Attorney General, she worked closely with Beau. I watched as they took on the big banks, lifted up working people, and protected women and kids from abuse. I was proud then, and I’m proud now to have her as my partner in this campaign.”

“@JoeBiden can unify the American people because he’s spent his life fighting for us,” Harris tweeted. “And as president, he’ll build an America that lives up to our ideals. I’m honored to join him as our party’s nominee for Vice President, and do what it takes to make him our Commander-in-Chief.”

Biden and Harris will deliver remarks in Wilmington, Del., Wednesday on “working together to restore the soul of the nation and fight for working families to move the country forward,” the campaign announced.

During the Democratic primary, Biden had committed to choosing a woman as his running mate. Black leaders urged him to pick an African-American woman. Harris’s father, Donald Harris, is a Black native of Jamaica. Her mother, Shyamala Gopalan, was born in India.

Progressives, meanwhile, had urged Biden to pick Warren, who is further left than he is on most issues.

Rice, who was considered a leading VP candidate in recent days, released a statement congratulating Harris and vowing to “do my utmost to help them win and govern.”

Biden and Harris will formally accept the presidential and vice presidential nominations during the Democratic National Convention, which begins next week.

Former President Barack Obama, who is speaking at the convention, applauded Biden’s choice.

“I’ve known Senator @KamalaHarris for a long time,” Obama tweeted. “She is more than prepared for the job. She’s spent her career defending our Constitution and fighting for folks who need a fair shake. This is a good day for our country. Now let’s go win this thing.”

[Also read: How Kamala Harris was shaped by ‘the People’s Republic of Berkeley’]

Sen. Cory Booker, D-N.J., told Yahoo News that “this isn’t the first time my friend and sister Kamala Harris has made history and it won’t be the last.

“She is a fearless and inspiring leader who will help Vice President Biden bring our country together to build a more just, fair country for everyone,” Booker added. “I can’t wait to call her Madam Vice President.”

Although Harris is viewed as more moderate than some of Biden’s potential picks, the Trump campaign said her selection is “proof that Joe Biden is an empty shell being filled with the extreme agenda of the radicals on the left.”

“Joe Biden is no moderate, and with Harris as his ‘political living will,’ he is surrendering control of our nation to the radical mob,” Trump campaign spokesman Katrina Pierson said in a statement. 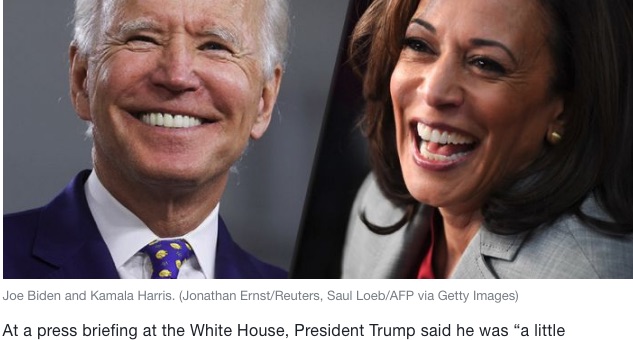 At a press briefing at the White House, President Trump said he was “a little surprised” that Biden picked Harris because of her dismal showing in the Democratic primary — and tried to paint her as a member of the so-called radical left.

“She was extraordinarily nasty,” the president said. “I won’t soon forget it.”

Speaking at a campaign event in Arizona, Vice President Mike Pence also tried to paint Harris as a radical.

“As you all know, Joe Biden and the Democratic Party have been overtaken by the radical left,” Pence said. “So given their promises of higher taxes, open borders, socialized medicine and abortion on demand, it’s no surprise that he chose Senator Harris.”

Pence and Harris are due to face off in a vice presidential debate in Salt Lake City in October.

Harris, who lost her own bid for the 2020 Democratic nomination, clashed with Biden during the first primary debate by attacking his record on race. She sharply criticized him for his fond recollection of working with segregationist senators in the Senate and his opposition to federally mandated busing in the 1970s.

“There was a little girl in California who was part of the second class to integrate her public school, and she bused to school every day,” Harris said. “And that little girl was me.” 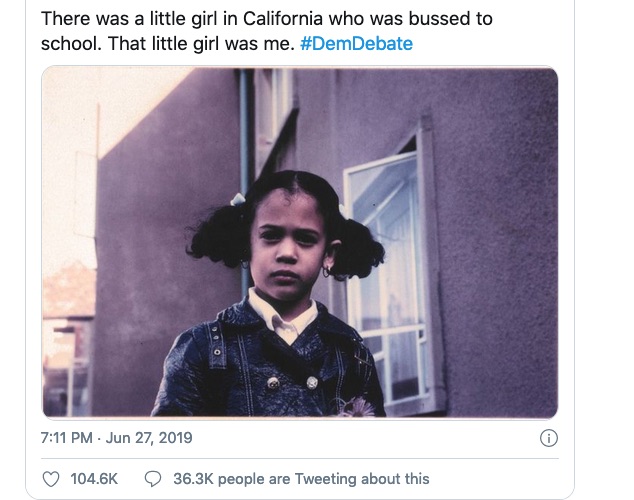 Biden called it a “mischaracterization” of his position “across the board.”

“I did not praise racists. That is not true, No. 1,” he said. “No. 2, if we want to have this campaign litigated on who supports civil rights and whether I did or not, I’m happy to do that.”

The debate performance gave Harris a brief bump in the polls, but she failed to consolidate her momentum and left the race in December. She endorsed Biden in March and stumped for him in Michigan ahead of Super Tuesday.

Biden has always said Harris would make a strong running mate. But during the vetting process, former Sen. Chris Dodd, a member of Biden’s vice presidential search committee, reportedly expressed doubts about her loyalty, saying she showed “no remorse” about her debate “ambush.” Others on Team Biden privately worried whether her presumed presidential aspirations might lead Harris to upstage him during the final stretch of the 2020 campaign. 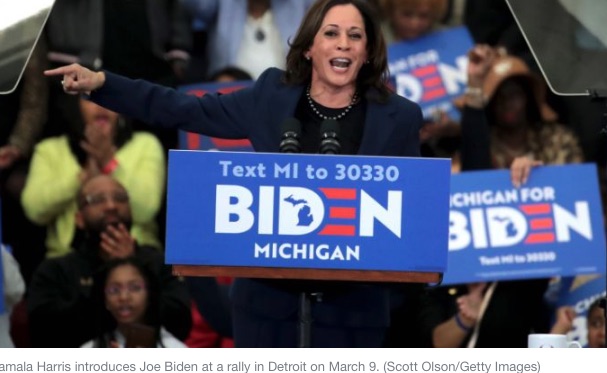 Also during the primary, Harris’s pre-Senate résumé came under scrutiny. She was a prosecutor, district attorney and state attorney general before becoming a U.S. senator.

At the second Democratic debate, Rep. Tulsi Gabbard, D-Hawaii, accused Harris of blocking evidence that would have freed “innocent people” from jail, including a man on death row.

Harris responded by saying that as California attorney general, she “did the work of significantly reforming the criminal justice system of a state of 40 million people, which became a national model for the work that needs to be done.”

“My entire career I have been opposed, personally opposed, to the death penalty,” Harris added. “And that has never changed.”

An Oakland, Calif., native, Harris earned her bachelor’s degree in political science and economics from Howard University and her law degree from the University of California, Hastings College of the Law.

Harris is married to attorney Douglas Emhoff and is the stepmother to Cole and Ella, Emhoff’s two children from his previous marriage.