Biden slams Trump over Woodward book revelations, says president ‘failed to do his job on purpose’

Democratic presidential nominee Joe Biden responded to a series of bombshell revelations about President Trump on Wednesday, saying that audiotapes recorded by veteran journalist Bob Woodward showed Trump “failed to do his job on purpose.”

“He knew and purposely played it down. Worse, he lied to the American people,” said an animated Biden during a speech in Michigan. “He knew how dangerous it was. He failed to do his job on purpose.

“It was a life-and-death betrayal of the American people,” added Biden.

In interviews recorded earlier this year, Trump told Woodward that he purposely downplayed the severity of the coronavirus in order to avoid causing a “panic.”

“To be honest with you, I wanted to always play it down,” Trump told Woodward on March 19. “I still like playing it down, because I don’t want to create a panic.”

And while Trump would publicly insist that he was unconcerned with the virus until mid-March, he told Woodward on Feb. 7 that it was “deadly stuff” — far worse than the typical flu — and that it could easily infect people.

“You just breathe the air and that’s how it’s passed,” Trump said.

Woodward’s upcoming book, “Rage,” is set to reveal the president’s views on foreign policy, race and other major issues that have arisen over the past two years, according to the Washington Post. The Post story included the audio recordings of Woodward’s interviews with Trump.

Biden said that Trump’s actions as detailed by Woodward are “beyond despicable. It’s a dereliction of duty. It’s a disgrace.”

Although the president still gets relatively high marks on his handling of the economy, polls indicate that most Americans think Trump bungled the U.S. response to COVID-19.

Woodward and Trump also discussed racial issues, and while the president told Woodward he thinks there is institutional racism in the United States, he complained that he’s not getting sufficient support from Black voters.

“I’ve done a tremendous amount for the Black community,” Trump told Woodward. “And, honestly, I’m not feeling any love.” 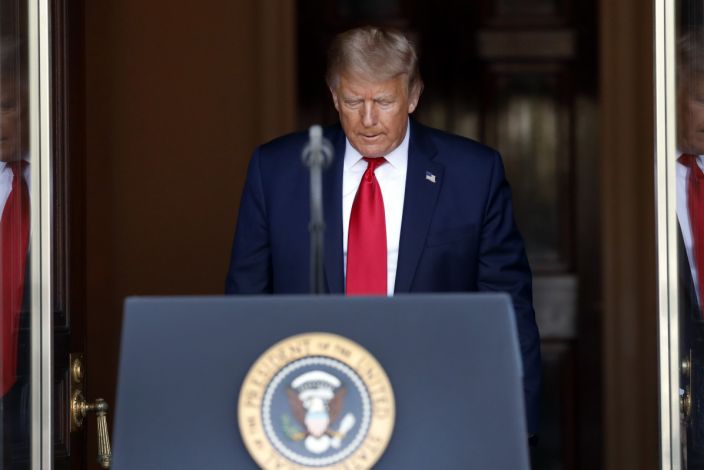 U.S. President Donald Trump arrives for a news conference on the North Portico of the White House in Washington D.C., U.S., on Monday, Sept. 7, 2020. Trump said congressional Democrats don’t want to make a deal on another round of economic stimulus because they think it would help him win re-election. Photographer: Yuri Gripas/Abaca/Bloomberg via Getty Images

Biden has ratcheted up his in-person campaigning in recent weeks. Wednesday marked the first time he’s visited Michigan since the onset of the coronavirus pandemic.

Michigan is one of several critical swing states that Trump narrowly and surprisingly won in 2016. Recent polls show Biden leading the president there. Trump is scheduled to visit Michigan on Thursday.

Biden’s campaign is eager to snag the state’s 16 electoral votes, leaning heavily into his blue-collar, pro-union image while arguing that he is the candidate best suited to revitalize the nation’s struggling manufacturing sector. Biden, saying he would be the most “union-friendly” president in American history, outlined some of his plans to expand and protect U.S. manufacturing in his Wednesday afternoon remarks — and painted Trump’s promises to the state in 2016 as “a bunch of hot air.”

“Under Donald Trump, Michigan lost auto jobs even before COVID hit. And what about offshoring? Has Trump delivered on stopping companies from shipping American jobs overseas? You already know the answer to that. Of course not,” said Biden.

If Trump loses the election, he’ll resign and have Mike Pence pardon him to prevent a federal prosecution, Michael Cohen’s book claims

A black man, an Ex-Military Police officer detained while jogging in a White Neighborhood.  Narrowly escaped death at the hands of white police