The two young men started at the same college, on the same day, and financed their education the same way: by going deep into debt.

Today, Elie Kirkland is so financially secure that, at age 24, he’s thinking of buying a home. Richard Williams, also 24, is in such a hole that he deferred his dreams of becoming a doctor.

Their stories reflect a remarkable sequence of events at Morehouse College, a historically black men’s school in Atlanta. The Morehouse Class of 2019 hit the American college equivalent of the lottery: Billionaire Robert F. Smith surprised its members at graduation with an extraordinary pledge to pay off their student debt.

It was only a quirk of bureaucracy that kept Kirkland in the money. He was supposed to graduate, like Williams, in 2018. But because of financial aid complications, Kirkland delayed graduation by a year and landed in the class that received Smith’s gift.

The gift was a reminder of both the country’s vast wealth gap as well as the magnitude of the student-debt crisis. It cost Smith less than 1% of his net worth, which is estimated to be about $6 billion. And it was a drop in the bucket of U.S. student loan debt, which stood at nearly $1.7 trillion in March, according to the Federal Reserve. Smith declined to be interviewed for this story.

For recipients, it could be quite literally life changing. A Morehouse student usually graduates with between $35,000 and $40,000 in student loan debt, according to the school. Upon graduating, Black Americans owe $7,400 more on average than their white peers, according to a 2016 study by the Brookings Institution.

Smith’s donation was worth $34 million to roughly 400 students and their parents. The surprise gift created the perfect conditions for an economic experiment about the long-term effects of starting off life with a pile of student debt. In fact, Morehouse plans to study its impact.

But just a year later, the effects are becoming evident.

After graduating in 2018 with a degree in biology and public health, Williams moved back to his hometown of San Diego and started working at a hospital pathology laboratory. It wasn’t his first choice. 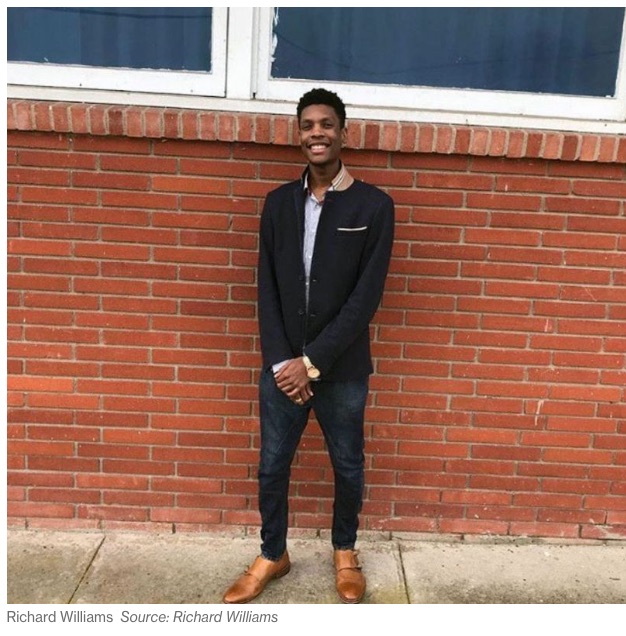 “I had aspirations to go to medical school, but everything is so expensive,” he said.

Simply applying to medical school — taking the Medical College Admission Test ($320), application fees and trips to interview at schools — can cost thousands of dollars. Tuition to a four-year program ranges from about $35,000 a year for in-state students at public universities to north of $60,000 a year at private schools or for out-of-state students.

Instead, Williams enrolled in a public-health master’s program at nearby National University, where it will cost him around $30,000, total, for the degree. He started making the $500-a-month payments toward his undergraduate loans. The pandemic has put payments on hold, for now, but “it’s going to stack up,” he said. Williams took out more loans to pay for his master’s, and he hasn’t started paying those off. He says he’s overwhelmed.

For Kirkland, the lack of debt has meant he doesn’t have to face some of the same obstacles as his parents. He and his four siblings grew up in East Lansing, Michigan. His parents always stressed the importance of financial health because they struggled with their own credit card and student-loan debt, and they had low credit scores. “They were handicapped,” he said.

In fact, his dad had only just paid off his own student loans when he took on more to pay for Morehouse. (Smith’s gift also covered loans taken out by parents.) They tried to warn Kirkland away from overusing credit cards. He didn’t heed their advice.

Now debt free, he stayed in Atlanta, where he lives with his girlfriend. His credit score is high enough that it puts other types of big decisions within reach, such as swapping his rent payment for a similar mortgage payment on a house. He’s been working as a vocal coach and hopes to start his own business.

The students of the Morehouse Class of 2019 now have more economic freedom to take those kinds of risks, such as starting a business, which can create wealth, said Henry McKoy, director of entrepreneurship at North Carolina Central University’s business school.

McKoy said the effects of being debt free could have a larger economic impact too, and be one small step in closing the racial wealth gap. Though they make up about 13.4% of the population, Black Americans hold less than 5% of the country’s wealth, according to June estimates from the Federal Reserve.

“It can be very challenging,” McKoy said. “You don’t have the family wealth or that generational wealth to fall back on if something goes wrong.”

Kirkland recalled that toward the end of Smith’s commencement address, before the gift was announced, students’ attention spans were beginning to wane. Smith wasn’t exactly a household name, Kirkland said. “We didn’t know who he was,” he said. “All we knew is we heard he was richer than Oprah.” 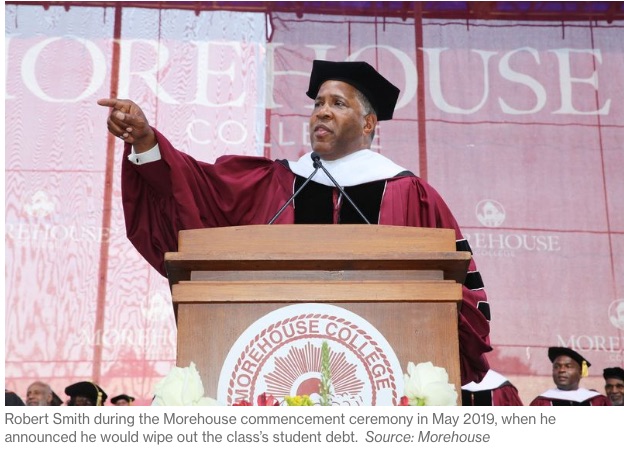 With $6 billion, Smith, 57, is richer than Oprah — and every other Black American, for that matter. He is one of few Black private equity titans in the world. He’s also the only Black American on the Bloomberg Billionaires Index, a ranking of the world’s 500 richest people.

During the speech, Smith encouraged students to “pay this forward.”

“Let’s make sure every class has the same opportunity moving forward, because we are enough to take care of our own community,” he said.

Kirkland says he’d like to set up scholarships for others someday — and Williams is hoping that some think of the students who came before them.

“Maybe now they will be in a position to set us up, the people from 2018, with opportunities,” Williams said. “Or maybe they’ll help us pay off ours.”