Black men face high discrimination and depression, even as their education and incomes rise

Are you a highly educated and relatively wealthy Black man in the U.S.? Studies that we have done and also those by others show that you are at increased risk of discrimination and depression. Our research on the intersection of race and gender in the U.S. shows that while education and income reduce the risk of discrimination and depression for whites and Black women, this is not so for Black men. This underscores other research we have done that suggests Black men are especially singled out as dangerous, threatening and inferior.

The first author, Shervin Assari, is a physician and an associate professor of family medicine at Charles R. Drew University of Medicine and Science. Many of his studies have documented that black men still face depression, which could stem from discrimination, even when they achieve traditional measures of success.

The second author, Tommy J. Curry, is a philosopher and holds a personal chair of Africana philosophy and Black male studies at the University of Edinburgh. He is the author of “The Man-Not: Race, Class, Genre, and the Dilemmas of Black Manhood,” which won the American Book Award. The findings of his work show that Black men and boys not only experience racism, but are targets of extreme levels of dehumanization and violence because of their maleness.

First, we briefly summarize the results of six studies. Then, we discuss their meanings and implications – and the difficulty of Black men escaping the effects of racism with the added layer of gender, known as racial misandry, gendered or sexualized racism.
Study 1

In the National Survey of American Life study, Black boys from the wealthiest families were the most depressed.
Study 2

In a study that followed 1,200 Black and white people for 25 years, for Black men, the highest educational credentials were associated with an increase, rather than a decrease, in depressive symptoms.

In a nationally representative sample of U.S. adults, Black men with the highest income have the highest risk of depression, specifically major depressive disorder. We also found that interpersonal discrimination, or people discriminating one-on-one, was not a reason.

In another study, 700 Black adolescents were followed for two decades in Flint, Michigan. Perceived racial discrimination was measured in 1999 and 2002. We found discrimination during adolescence was a predictor of depressive symptoms as individuals transitioned to young adulthood a decade later. But this was the case for Black males, not Black females.
Study 5

In that same study in Flint, we found that an increase in perceived neighborhood fear, defined as being scared of the crime and violence in the neighborhood, was associated with an increase in depressive symptoms for Black males – but not Black females.
Study 6

Our final research was studying implicit bias, or when people, without their conscious knowledge, hold stereotypes about others. Our study applied data of the Implicit Association Test (IAT), which measures how our brain struggles to match Black faces with positive terms, of nearly 450,000 individuals. We found that white men hold higher implicit bias against Black people than white women do. This is troubling because white men have the highest level of political power and make up the majority of police, judges, lawyers and people who make hiring and promotion decisions. White men are also most likely to be the ones who write the rules and the laws. Implicit bias is still bias, and it too could be a factor in Black men’s depression. 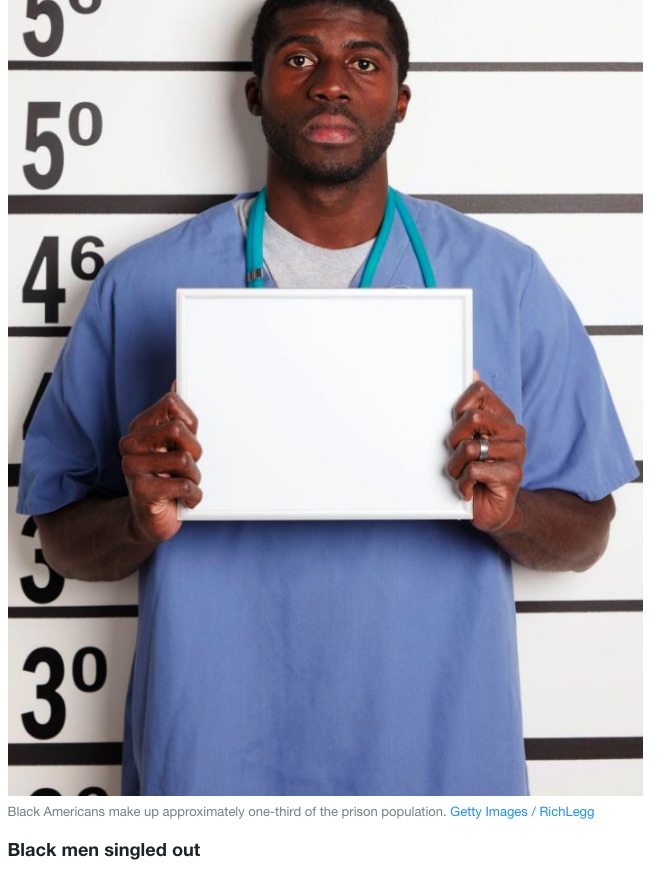 Many other studies show similar findings.

Black men are disproportionately shot and killed by police more than Black women. Black men are stopped, arrested, jailed more, and significantly overrepresented in U.S. prisons. Black men are six times more likely than white men to spend time in prison. This increased risk for black men is highest when they are tall and large.

One study deserves particular attention – the famous “Gender Matters Too.” It shows Black boys and girls in eighth and 11th grades differed in their perception of peer and classroom discrimination. For boys, discrimination harmed their grades, attitudes and their regard for the importance of school. For girls, however, the effects generally had a positive impact.

In other words, race alone may not be the issue here. Instead, it is an issue of race and gender, that may stem from hopelessness, inequality and blocked opportunities.

Together, these studies provide a disturbing picture of the challenges that Black males face. And, they show the burden that Black men bear when some whites wonder “What’s the big deal? Racism was 150 years ago.”

What ended 150 years ago was slavery, not racism, and our research suggests that Black men experience this racism in distinct ways. Many of the racist ideas white Americans have of Black people are driven by the negative stereotypes white Americans have of Black men being more violent, sexual promiscuous and dangerous than other race/sex groups. This dynamic is so strong that even hearing the names of Black men can lead to a fight-or-flight response in white males. A recent study found that even armed Black and white women were less threatening than unarmed Black males to white Americans.

And, according to our studies, regardless of their economic success and personal ambitions, Black males are still perceived as more threatening and dangerous than their female counterparts.

Unfortunately for us all, it has primarily been the dead Black male body that drives our understandings of racism against Black men and boys in the United States.

Yet racism stalks Black men every day of their lives, dehumanizing them, decreasing their quality of life and even shortening their lives; Black men live, on average, four fewer years than white men. Efforts to escape racism’s effects, such as gaining education and earning more money, force them to question their own worth.

We believe solutions are based not just on renaming streets but to acknowledge, without blaming Black men, how discrimination contributes to blocked opportunities, the lack of jobs and the use of lethal aggression against their group.

Although this piece focused on highly educated and high-income Black men, this problem is not only a problem of the most elite and most successful Black men. The disproportionate struggles that successful Black men have with depression does not indicate their weakness, but instead their vulnerability, and how racism has vastly different consequences for them compared to black women and other groups. Said differently, the consequences of the higher rates of homicide, incarceration and unemployment against the Black male group has existential consequences for many Black men and boys as individuals.
This article is republished from The Conversation, a nonprofit news site dedicated to sharing ideas from academic experts.

The authors do not work for, consult, own shares in or receive funding from any company or organization that would benefit from this article, and have disclosed no relevant affiliations beyond their academic appointment.