Black Miami doctor handcuffed while helping homeless during pandemic “Situations like this have escalated into black men being shot all across the country,” Dr. Armen Henderson said.

A black Miami doctor was handcuffed outside his home last week while on his way to hand out tents to the city’s homeless during the coronavirus outbreak.

The home security footage appeared to show a police sergeant handcuffing Dr. Armen Henderson, an internal medicine physician at the University of Miami Health System, as he was placing camping tents in his van. According to Henderson, the officer asked him what he was doing and if he was littering – Henderson told him he lived there. 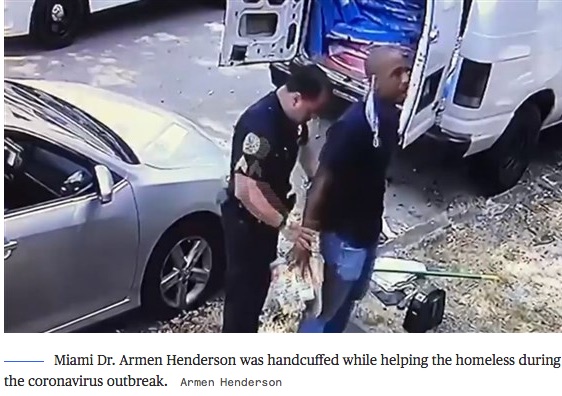 “At some point, he got upset with what I was saying and he handcuffed me,” Henderson, who is African American, told MSNBC. The officer then walked him over to the police car and pointed his fingers at him, all while not wearing a mask, the doctor said.

Henderson’s wife, Leyla Hussein, came out of the house with identification to prove they both lived there.

“It was really humiliating,” he said. 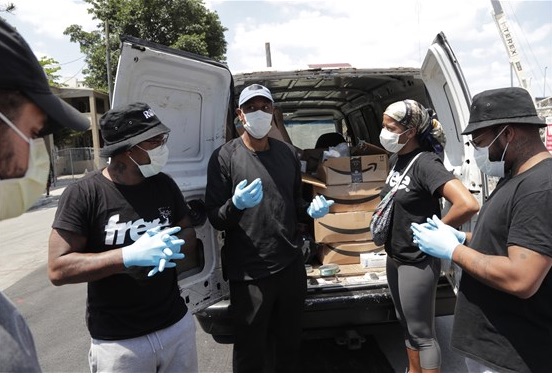 Dr. Armen Henderson, second from left, talks with volunteers before heading out to do outreach with the homeless population during the new coronavirus pandemic on April 3, 2020, in the Overtown neighborhood of Miami. Henderson has partnered with local organizations and volunteers to educate the homeless about the virus. They also passed out tents, meals and bottled water.Lynne Sladky / AP

In a video statement released last week, Miami Police Chief Jorge Colina acknowledged his agency was aware of the viral video and was committed to investigating the incident.

“The City of Miami Police Department does not condone or accept profiling of any kind,” Colina said.

In a statement sent to NBC News, Eldys Diaz, executive officer to the police chief, wrote, “The Miami Police Department takes all reports of police misconduct seriously and is particularly sensitive to allegations of racial profiling and abuse of authority.”

“If the investigation concludes that the involved employee violated Miami Police Department policies, he will be disciplined for each sustained violation in accordance with established agency procedures.”

Incidents like these underscore why black communities often distrust law enforcement. Only about a third of blacks say local police, “do an excellent or good job in using the appropriate force on suspects,” according to a 2016 Pew Research Center study.

CHINESE RACIST NATURE REVEALED. Why are African-Americans’ leader not calling out racism in China?

HOW AMERICAN CORPORATIONS SOLD US TO CHINA. We can not even make a mask or Glove even when our lives depends on it.

This Police Department Is So Bad, a...

2020 prediction from professor who called every...