Just a few days ago, the United States (US) government under the leadership of President Donald Trump tagged Boko Haram leader, Abubakar Shekau, a cancer tumor.

Through the United States Department of State’s Diplomatic Security Service’s Rewards for Justice Program, counter-terrorism rewards program, and the government expresses its commitment to eradicate the cancer tumor.

The US Department of State, in a tweet published alongside Shekau’s image on Tuesday, March 3, 2020, also made an offering of $7 million to anyone who can provide information leading to Shekau’s arrest. However, the offer was not as new as many news outlets have reported. Instead, this reward was recently republished by the newly created French Twitter account of the United States. President Obama’s administration started advertising this reward and the Trump administration has continued on the same path.
“This Cancer tumor must be eradicated! The US government offers up to $ 7 million for anyone who provides information leading to the arrest of the terrorist Abu Bakr Organization leader,” the tweet read. 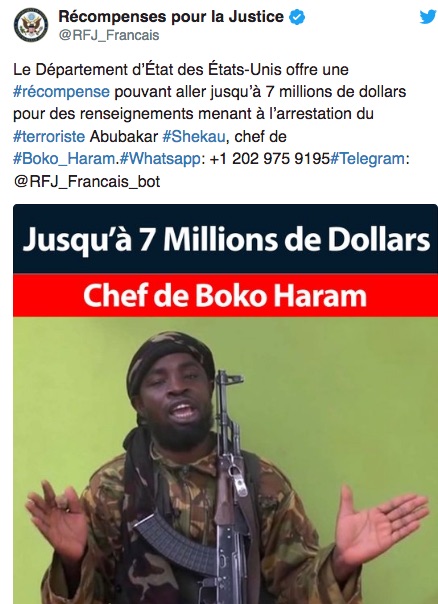 Just as how ‘a cancer tumor’ destroys body tissue, Boko Haram, whose sole purpose is to establish Islamic law in Nigeria, is responsible for unleashing destruction and mayhem in the country.

Referred locally as the Nigerian Taliban because of its religious similarities to the Taliban, the militants inhabit the northeast region of the country, precisely Yobe, Bauchi, Borno, Kano, and Kaduna.

For almost a decade now, Shekau, who succeeded Mohammed Yusuf as the sect leader, has claimed responsibility for the death of tens of thousands of people in the country.

More so, millions of people have been displaced from their homes as a result of the attacks often carried out by the insurgent group. 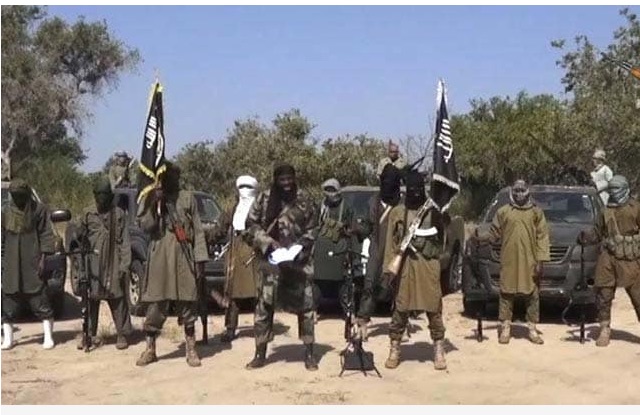 Amongst the many terrors unleashed by the insurgents, are the abduction of 276 female students in Chibok, Borno town; the detonation of three IEDs near a military Barracks in Bauchi city on the day former President Goodluck Jonathan was inaugurated, killing at least ten people; the car bomb attack on the United Nations compound in Abuja, leaving 23 people dead, and over 75 persons injured; the killings of over 200 people when Boko Haram launched coordinated attacks on police, military, a prison and other targets in the city of Kano; a fake checkpoint by the terror group near Benisheik in Borno, killing over 143 persons; the abduction of 110 in Dapchi, Yobe.

Sarcastically, it’s no longer news that the President Muhammadu Buhari-led administration is habiting the rehabilitation of the Boko Haram terrorists. To the surprise of many societal stakeholders and other Nigerians at large, the Federal Government even offered to provide the basic needs of the terrorists while integrating them into the society they (Boko Haram) ‘detest’.

A senator of the ruling All Progressives Congress (APC), had introduced a bill, that seeks the establishment of an agency that will be shouldered with the responsibility of de-radicalizing ‘repentant Boko Haram insurgents’.

A soldier who pleaded with Afro World News for anonymity, condemned the rehabilitation program of the Boko Haram terrorists, saying it’s a shame on the country.

He said, “I was part of those deployed to fight Boko Haram in Borno. Thankfully, I’m still alive today. I have lost my colleagues on the battlefield, and I witnessed how deadly these people are. Is it not shameful that Buhari is giving scholarships and rehabilitating Boko Haram members who are causing terror in the country?”

Another soldier who doesn’t want his name mentioned in this report as well, said his colleagues in the Nigerian Army are not happy with the rehabilitation of insurgents.

According to him, some of his friends are depressed and yet to recover from the shock that the terrorists they have so much sacrificed against, are being freed.

“This is one of the most insensitive decisions I’ve seen a government make. How can you possibly think of rehabilitating captured terrorists? This is a slap on many Nigerians; it shouldn’t be tolerated at all. I am not happy with the development, likewise many of my colleagues too,” he added.

Vera Okorochukwu, the Founder or Marvin Okorochukwu Foundation, spoke to Afro World News regarding the rehabilitation of the terrorists.

According to her, the society is no longer safe for children and the girl child.

“These people are famous for the terror they have unleashed. They are known for throwing families into mourning. They are serial rapists and fierce killers. So why have to risk other people’s future by thinking you can integrate these people,” she said.

Okorochukwu added that it is pertinent for Nigerians to note that many of the terrorists undergoing rehabilitation already, didn’t willingly surrender to the government, they were captured, which still poses a threat to the Nigerian society.

She said, “In my assessment, these people didn’t surrender to the government. They were captured, and that’s enough conviction that they might go back into terrorism once they are freed.”

A security expert who simply identified himself as Samuel, said as far as he’s concerned, the safety of people is the least worry of the government.

“These people’s demands are unrealistic. It’s never going to happy for Nigeria to become a wholly Islamic state, and of course, western education isn’t going to become a thing of the past. So on what basis are you bargaining with these terrorists, not alone grant them undeserved forgiveness with benefits,” he queried.

THE POSSIBLE CONSEQUENCES OF TRUMP’S RE-ELECTION AS...