After more than a week of protests against police brutality and unrest that left parts of the city burned, a growing chorus of elected officials, civic leaders and residents in Minneapolis are urging the city to break up the Police Department and reimagine the way policing works.

“We are going to dismantle the Minneapolis Police Department,” Jeremiah Ellison, a member of the City Council, said on Twitter this week. “And when we’re done, we’re not simply gonna glue it back together,” he added. “We are going to dramatically rethink how we approach public safety and emergency response.”

At least three others, including the City Council president, Lisa Bender, have also called for taking the Police Department apart.

Minneapolis is not the only city asking the question. Across the country, calls to defund, downsize or abolish police departments are gaining new traction after national unrest following the death of George Floyd, a black man who died after a white police officer pressed a knee into his neck for nearly nine minutes on a busy Minneapolis street.

On Wednesday, Mayor Eric Garcetti of Los Angeles announced that he would cut as much as $150 million from a planned increase in the Police Department’s budget. And in New York, Corey Johnson, the City Council speaker, and Daniel Dromm, a council member from Queens, vowed even before the latest protests to cut the Police Department’s $6 billion budget, which they noted had been left almost untouched even as education and youth programs faced steep cuts.

The calls to redirect money away from the police come as cities face steep budget shortfalls because of the economic fallout from the coronavirus, and as public anger against police brutality has roiled the country. Redirecting funding is one of the few levers that elected officials have over the police, who are frequently shielded by powerful unions and labor arbitrators who reinstate officers fired for misconduct.

Dromm, chair of the city’s finance committee, said that in order to restore some funding to youth programs he was considering a delay in the next class of police cadets and scrutinizing the $700 million in police overtime that has been budgeted for this year. He said the events of recent days — including police officers’ treatment of peaceful protesters — had shown that years of efforts to reform the department had not succeeded. 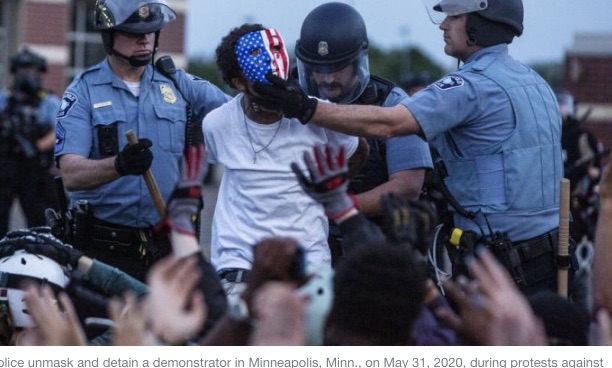 “The culture in the New York City Police Department has not changed,” he said. “The white shirts, the commanding officers, they kind of get it and talk the talk, but the average beat cop doesn’t believe in it and we’ve seen this over and over again.”

In Minneapolis, calls to dismantle the police are likely to further demoralize a force that already is reeling from the killing of Floyd, the criminal charges filed against four former officers, looting in the city and the burning of a police precinct.

“That’s not the answer,” said Gwen Gunter, a retired lieutenant of the Minneapolis Police Department who is also a member of a black police officers association.

“There’s a part of me that hopes they do succeed,” she said, “because I want to see how long it takes before they say, ‘Oh, no we do need a Police Department.’”

The Minneapolis police chief, Medaria Arradondo, pledged Friday to “continue to work on efforts to improve public trust, public safety and transformational culture change of the MPD.” His statement did not address the recent calls to dismantle the department.

Those who support the movement to scale back the responsibilities of the police say officers frequently abuse their power and instigate violence rather than prevent it. They say many social welfare tasks that currently fall to armed police officers — responding to drug overdoses and working with people who have a mental illness or are homeless — would be better carried out by nurses or social workers.

One model that members of the Minneapolis City Council cite is Cahoots, a nonprofit mobile crisis intervention program that has handled mental health calls in Eugene, Oregon, since 1989. Cahoots employees responded to more than 24,000 calls for service last year — about 20% of the area’s 911 calls — on a budget of about $2 million, probably far less than what it would have cost the Police Department to do the work, said Tim Black, the program’s operations coordinator.

“There’s a strong argument to be made from a fiscally conservative perspective,” Black said. “Public safety institutions generally have these massive budgets and there’s questions about what they are doing.”

But handing over one aspect of police work is not a panacea. Eugene has had at least two officers shoot people in the past year.

Last year, after a campaign by a group called Durham Beyond Policing, the City Council in Durham, North Carolina, voted against hiring 18 new police officers and began discussing a “community safety and wellness task force” instead.

Minneapolis took a step in that direction last year when it redirected funding for eight new police officers into a new office for violence prevention.

“We have an opportunity to reimagine what the future of public safety looks like,” said Steve Fletcher, a City Council member who pushed that effort. But he acknowledged that the effort to build a viable alternative to the police on social and mental health issues would take years and that no one could be sure what it would look like in the end.

“It’s very easy as an activist to call for the abolishment of the police,” said Fletcher, himself a former activist who protested a 2015 police shooting. “It is a heavier decision when you realize that it’s your constituents that are going to be the victims of crime you can’t respond to if you dismantle that without an alternative.”

Black activists in the city have been calling for the police to be dismantled for years, issuing a report in 2018 that argued that the oppression of poor people and black people was baked into the very founding of the department in 1867. Police reform has roiled politics in the city for years, and politicians who have been seen as slow to reform have been defeated. But only recently have calls to dismantle the police been widely embraced by white leaders in the city.

In Linden Hills, a predominantly white Minneapolis neighborhood near a golf course and two lakes that has not seen very many of the overly aggressive police tactics that the city’s black residents complain about, residents acknowledge that the department needs to be significantly reformed. But they have been leery of pledges to abolish the police.

“What does that even mean?” asked Steve Birch, the chair of the Linden Hills Neighborhood Council. “Then who provides the public service of policing? I don’t even know how to answer that.”

But in Kingfield, a neighborhood in South Minneapolis not far from where Floyd died, Chris DesRoches, the president of the neighborhood association, said he supported defunding the department.

“The killing of George Floyd has opened the eyes of people to the worst case scenario of police,” he said, adding that the case has created an opportunity “for white people to start hearing what communities of color and community leaders have been saying all along, which is that the police are an organization which has been actively harmful to our communities.”

Mayor Jacob Frey has said he does not support calls to dismantle the department. On Friday, City Council members voted to accept a civil rights investigation by the Minnesota Department of Human Rights and to adopt updates to the Police Department’s use of force policy that include a ban on chokeholds. The topic of eliminating some of the department’s functions was not discussed.

Still, council members acknowledged during their debate that something had changed fundamentally in the way that city residents view the police. The University of Minnesota, as well as the school board and the parks department in Minneapolis, decided in recent days to cut ties with the Police Department.

Many in Minneapolis have said that Floyd’s death provided a stark illustration of how far efforts to institute reforms in the wake of the 2015 police shooting of Jamar Clark, a 24-year-old African American man, had fallen short.

After that shooting, police officers received implicit bias training and body cameras. The department appointed its first black police chief. Community policing was emphasized. Policies were rewritten to include a “duty to intervene” if an officer saw a colleague endangering a member of the public — a policy that was key to the swift firing and arrest of the four officers involved in Floyd’s death.

But those reforms were not sufficient to prevent Floyd’s death.

“The fact that none of the officers took the initiative to follow the policy to intervene, it just became really clear to me that this system wasn’t going to work, no matter how much we threw at it,” said Alondra Cano, who heads the City Council’s public safety committee.

Cano, who says she was part of a “prosecute the police” campaign while she was a college student, acknowledged that it might take years to build viable alternatives. But she said many city residents, some of whom have formed mutual protection neighborhood groups in the wake of the unrest, were ready to try.

“There’s a moment of deep commitment that I’ve never seen before, and that gives me leave as an elected official to start experimenting with other systems,” she said.

Source: This article originally appeared in The New York Times.