London — The sculpture of a Black Lives Matter protester that appeared on a plinth formerly occupied by a statue of a slave trader, which was torn down and thrown into a river last month in Bristol, England, was removed Thursday by the city. The city of Bristol has not yet officially decided what to do with the plinth on which a statue of Edward Colston previously stood.

In a statement on Wednesday, Bristol’s mayor, Marvin Rees, said that the replacement statue of a female protester with her fist raised to the sky, which appeared early that morning, had been put up without permission.

“We have established a history commission which will help us tell our full city history,” Rees said in a statement. “As we learn this fuller history including the part played by black people, women, the working class, trade unions, and children among others, we will be in a better position to understand who we are, how we got here, and who we wish to honor.” 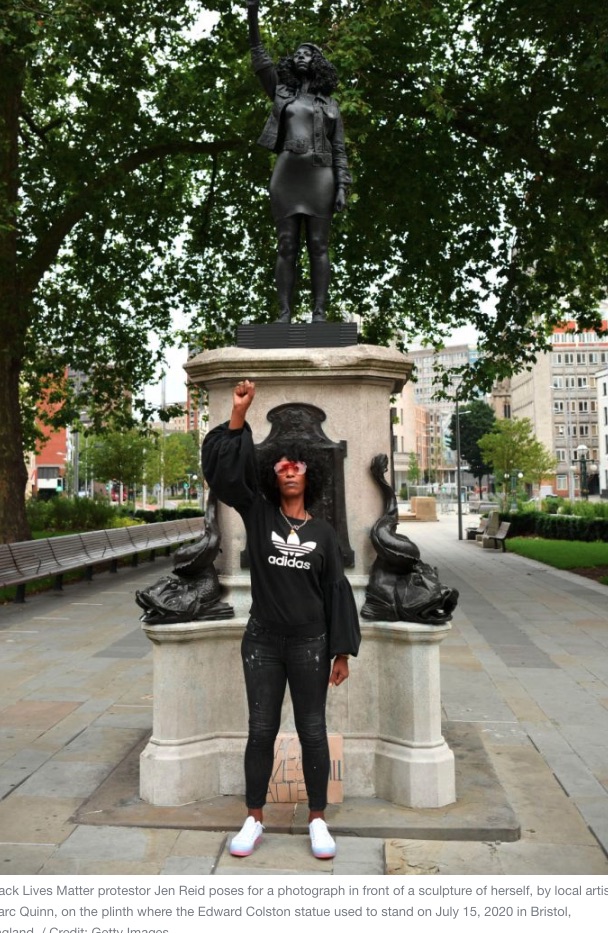 The sculpture of Jen Reid, who helped pull down the statue of 17th-century merchant and slave trader Colston in June and was photographed in the pose with her fist raised, was secretly installed by the team of artist Marc Quinn at dawn on Wednesday.

A cardboard sign saying “Black lives still matter” was placed beneath the work, which the artist titled “A surge of power (Jen Reid) 2020.”

Quinn and Reid, who collaborated on the work, said the installation was always intended to be temporary.

“When I was stood there on the plinth, and raised my arm in a Black Power salute, it was totally spontaneous, I didn’t even think about it,” Reid said in a statement about the work. “It was like an electrical charge of power was running through me. My immediate thoughts were for the enslaved people who died at the hands of Colston and to give them power. I wanted to give George Floyd power, I wanted to give power to Black people like me who have suffered injustices and inequality. A surge of power out to them all,” she said.

“It is such a powerful image, of a moment I felt had to be materialized, forever,” Quinn said in a statement. He said he contacted Reid via social media after he saw the photograph of her about the idea of a sculpture and she agreed to collaborate.

After the killing of George Floyd in Minnesota, Black Lives Matter protests erupted in cities across the United Kingdom. In Bristol, protesters defaced and then pulled down the statue of the slave trader Colston, which had stood in a central square, dragged it to the harbor and threw it into the river. It was eventually retrieved, and conservationists say it will be put in a museum with the graffiti from the protest preserved.

“Jen and I are not putting this sculpture on the plinth as a permanent solution to what should be there — it’s a spark which we hope will help to bring continued attention to this vital and pressing issue. We want to keep highlighting the unacceptable problem of institutionalized and systemic racism that everyone has a duty to face up to,” Quinn said.

“This sculpture is about making a stand for my mother, for my daughter, for Black people like me,” Reid said. “It’s about Black children seeing it up there. It’s something to feel proud of, to have a sense of belonging, because we actually do belong here and we’re not going anywhere.”

Africa’s Real Estate Boom! Africa on the Rise; Banana Island in Lagos is a Billionaire’s Heaven