Coronavirus: How fast is it spreading in Africa?

The rate of increase in Covid-19 cases in Africa has for the first time started slowing, according to the World Health Organization (WHO).

But the global health body urges caution in the interpretation of the figures, and there’s concern that official data may not give a true picture of the scale of the outbreak.

We’ve looked at the situation across Africa, and examined which countries are of most concern.
How fast is coronavirus spreading?

The continent passed one million cases on 6 August, but the rate of increase in reported cases recently has slowed.

This is mainly driven by a decline in new cases in South Africa, which accounts for more than half of all cases reported so far on the continent.

From 30 July until 5 August, the total number of cases on the continent rose by 11%, so less than the 16% rise the week before.

“One could be tempted to think that there is a decrease… I will not read too much into that, we have to observe these trends over several weeks before making a conclusion,” says Africa CDC’s John Nkengasong. 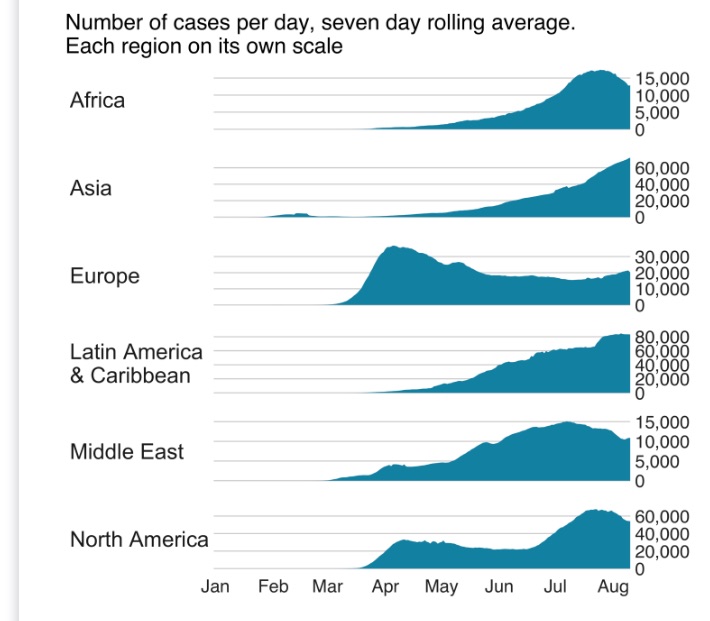 In terms of confirmed cases, Africa accounts for only a small proportion of the global total – just 5%.

But the global humanitarian relief body, the International Rescue Committee, says it believes the true scale of the pandemic may be hidden because of a lack of testing and issues with data.

Where are Africa’s hotspots?

South Africa has the highest recorded number of total cases and reported deaths in Africa, and the fifth highest number of confirmed cases worldwide.

Reported deaths appear lower compared with other countries in the world badly hit by coronavirus.

But research from the South African Medical Research Council (SAMRC) indicates the number of people who have died from the virus could be much higher than officially reported.

It says excess deaths, which is the difference between deaths reported over a particular period and the historical average, rose by 17,000 – that’s a 59% increase compared with previous years.

There are some signs that the case numbers in South Africa could be stabilising, and the WHO says the hospitalisation rate is also slowing down.

Gauteng province, which includes Johannesburg, accounts for more than a third of the total cases. But Western Cape province (where Cape Town is located) has reported most deaths.

Egypt has seen case numbers rising rapidly since mid-May, but there are indications that this may now have reached a peak with recorded new infections levelling off in early July, and continuing to drop.

There is also concern about what is happening in Nigeria, which is third in terms of total cases recorded so far on the continent. There was a dip in cases in early August, but the Nigeria Centre for Disease Control says that could have been caused by low testing.

It’s worth stressing that some parts of the continent have seen relatively few cases, such as some areas of central and East Africa.

The Africa CDC (Centres for Disease Control and Prevention) says that five countries account for more than 75% of all the reported cases on the continent.
How many people are dying in Africa?

The reported death rate per capita has been low compared to other parts of the world, despite the poor health infrastructure in many African countries.

The WHO says this could be partly because of the relatively young population in Africa – more than 60% under the age of 25. Covid-19 is known to have a higher mortality rate for older age groups.

Health problems common to richer countries, such as obesity and type 2 diabetes, which increase Covid risk, are also less common in Africa.

In terms of what proportion of people who get Covid-19 go on to die, there are ten African countries with rates comparable with or higher than the most recent global average rate of 4%.

The top five are:

But Githinji Gitahi, the head of Amref Health Africa, an NGO which specialises in health matters, says the higher fatality rates could be an indication of much higher infection levels not being captured because of low levels of testing.

The fewer tests you carry out, the fewer cases you find, and so the number of deaths appears relatively high.

It’s also true that different methods of recording deaths attributed to Covid-19 may affect the numbers, and make comparisons difficult.
How much testing is done in Africa?

There are wide variations in testing rates, with South Africa doing the most and Nigeria doing relatively few, according to Our World in Data, a UK-based project which collates Covid-19 information.

“There is still a lot of work to do to scale up the testing and appreciate the true situation,” Dr Matshidiso Moeti, the WHO’s Africa director, says.

It’s also worth pointing out that for some African countries, it is impossible to know what exactly is happening due to a lack of any data or data being incomplete.

In Tanzania, President John Magufuli has voiced doubts about the validity of virus testing results at the national laboratory, and has allowed only limited data on infection rates and testing to be made public.

Equatorial Guinea had a row with the WHO after accusing its country representative of inflating the number of Covid-19 cases. For a while it held back its data, but has now started sharing it again.

Note: The graphics in this page use a different source for figures for France from that used by Johns Hopkins University, which results in a slightly lower overall total. US figures do not include Puerto Rico, Guam or the US Virgin Islands.