More than 10,000 people have died with coronavirus in Mexico, the country’s health minister has announced.

The announcement came on the same day that many restrictions brought in to curb the spread of the virus were lifted.

The number of confirmed cases was more than 93,000 as of Monday, according to official figures.

That figure means Mexico is the fourth-worst affected country in Latin America after Brazil, Peru and Chile.
What’s the situation in Mexico? 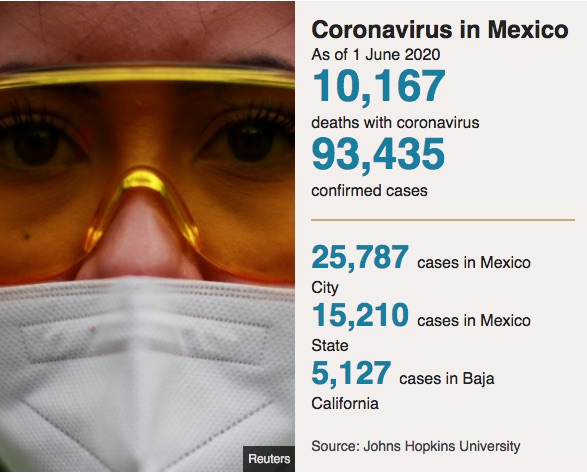 The number of cases continues to rise steeply. On Monday, the country recorded 2,771 new cases and 237 deaths with coronavirus.

The worst affected states are Mexico City, the state surrounding it and Baja California in the north.

The states of Puebla in central Mexico and Sinaloa in the north have also experienced a steep increase in cases.

The number of tests carried out in Mexico is low and experts warn the number of people infected could be much higher than that reported by the government.
What restrictions have there been?

The first confirmed case of coronavirus was registered in Mexico at the end of February but social distancing measures were not introduced until mid-March.

Schools were officially closed from 20 March, although some states had already suspended classes some days earlier.

While most of the economy was stopped from 23 March, some industries were declared key to the functioning of the nation and were exempt from the restrictions, triggering protests by workers who said they did not feel safe.

From 18 May, areas where there have been few infections started easing restrictions. On 1 June, the construction sector and automobile manufacturers resumed operations and parks in Mexico City re-opened to a third of their capacity.
Why has the president come under fire?

Critics of the government of President Andrés Manuel López Obrador say he was slow to impose restriction and has been too quick to lift them. 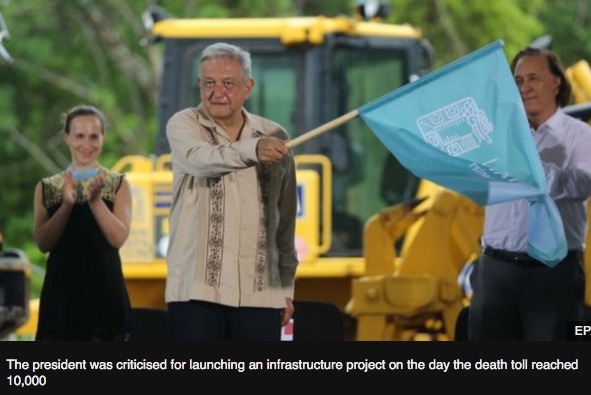 On Monday, he explained his approach: “We have to move towards the new normal because it’s necessary for our national economy, our people’s wellbeing; we need to, little by little, return production, economic, social and cultural activity to normal.”

But that approach garnered criticism from those who said he should have spoken about the 10,000 people who died instead.

Some media have also pointed out that under the coronavirus traffic-light scale introduced by the government, most states remain in the highest risk “red zone” and questioned whether it was the right time to ease restrictions.

The racism denier in charge of defending black rights in Brazil

‘This is a murder’: Zelensky shows Congress...