A group of Republican and Democratic lawmakers unveiled a $908 billion stimulus plan on Dec. 1, in an attempt to break through partisan gridlock after months of failed relief negotiations.

“It’s not the time for political brinkmanship,” said Sen. Joe Manchin (D., W.V.) at a press conference on Tuesday.

The bipartisan group of lawmakers — including Manchin, Senators Mark Warner (D., Virg.), Bill Cassidy (R., La.), Susan Collins (R., Me.), Mitt Romney (R., Utah) and several others — say their plan aims to find common ground on some of the most pressing issues, and it could be used as a framework for the next stimulus package.

The compromise proposal, which totals $908 billion, includes $160 billion for state, local and tribal governments —a top priority for Democratic lawmakers, which most Republicans opposed — and short-term protections from coronavirus lawsuits, a “red line” for Republican Majority Leader Mitch McConnell that Democrats have rejected. Those two issues alone have caused significant problems throughout negotiations so far. Romney said the temporary protections give states time to put their own protections in place.

“Any state that doesn’t put in place protections hasn’t been thinking this through very carefully — because if I were a CEO I would never think of putting a new business in a state that didn’t have liability protection for COVID,” said Romney. 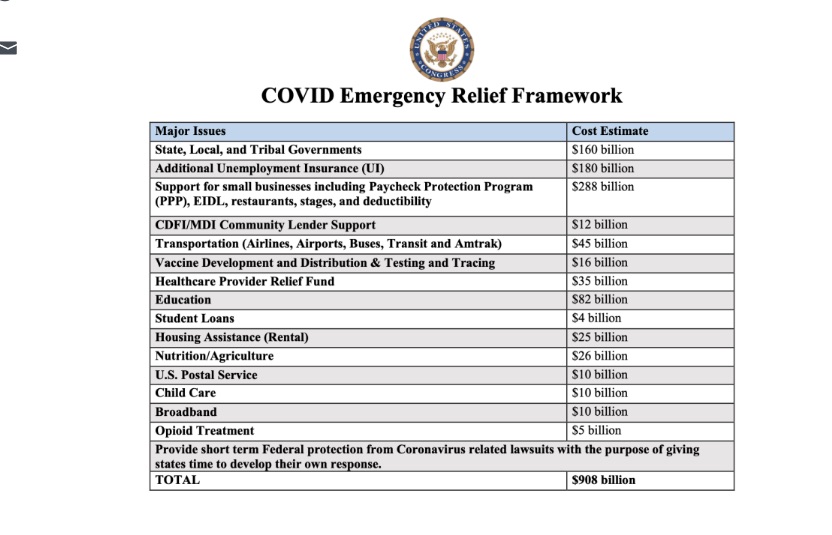 The proposal also includes $288 billion to support small businesses through the Paycheck Protection Program, Economic Injury and Disaster Loans and other provisions. The lawmakers are calling for $180 billion for additional unemployment insurance, which would provide a $300 weekly boost to jobless benefits. The extra $600 per week included in the CARES Act expired earlier this year.

The proposal also calls for funding for vaccine development and distribution, testing and tracing, education, child care, rental assistance, student loan assistance, transportation and more. The plan does not include another round of stimulus checks.

“Republicans and Democrats, neither of us got everything we wanted. Both of us got much of what we wanted. I think that combination reflects what Congress is supposed to do — Reconciling different priorities but ultimately doing something good for the American people,” said Cassidy.

The framework aims to provide relief through the first quarter of 2021, when President-elect Biden and the next Congress could decide what further measures are necessary.

“It would be stupidity on steroids if Congress left for Christmas without doing an interim package as a bridge,” said Warner.

Manchin said the lawmakers could put together an actual bill quickly, and he’s hopeful Congressional leadership would put that legislation on the floor for a vote. Senators said the group has presented some of its ideas to Treasury Secretary Steven Mnuchin and sought his input on necessary funding, but they told reporters they didn’t know if the White House would support the plan.

In a Senate Banking Committee hearing on Tuesday, Federal Reserve Chairman Jerome Powell and Mnuchin said they had not seen the specific details of the $908 billion proposals.

“It sounds like you’re hitting a lot of the areas that could definitely benefit from help and some of these are areas that are going to be experiencing a challenging winter,” said Powell.

Mnuchin said he spoke with Republican leaders in the House and Senate on Monday and President Trump on Tuesday morning.

“We all believe there should be targeted fiscal response,” Mnuchin said in the hearing.

Some lawmakers and experts are hoping to include some relief measures in a funding bill to avoid a government shutdown on Dec. 11. It’s still not clear whether or not that will happen.

In a separate attempt to push coronavirus relief forward, a group of 30 Democratic senators on Tuesday sent a letter to Senate leaders urging them to extend the programs in the next round of COVID-19 relief.

Jessica Smith is a reporter for Yahoo Finance based in Washington, D.C. Follow her on Twitter at @JessicaASmith8.

I’m A Black American. Here Is How I Used Solo Travel To Escape My Racist Country.

The Madness of so-called African Leaders! 88...