Dawn Butler calls Boris Johnson a ‘racist and a homophobe’

Butler also accused the PM of “deliberately” creating a “toxic” debate around the Gender Recognition Act.

During a quick fire question round, the discussion turned to the Conservative party’s stance on trans rights.

Butler said: “The Tories are doing this to attack a section of the community and we cannot allow this to happen. It is a deliberate attempt to divide us.

“Every time I question them in parliament they make an excuse, and it’s not f**king good enough.” 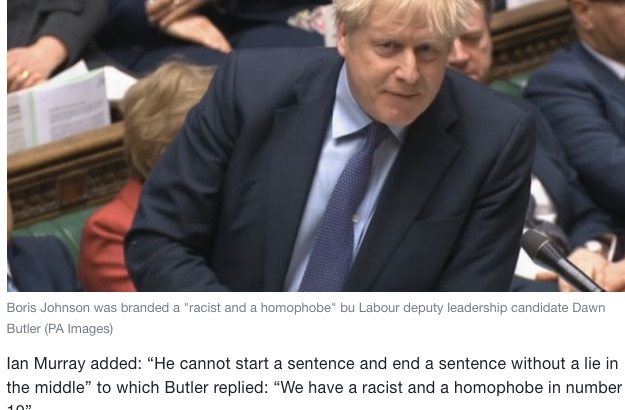 Ian Murray added: “He cannot start a sentence and end a sentence without a lie in the middle” to which Butler replied: “We have a racist and a homophobe in number 10”.

The Prime Minister has previously to gay men as “tank-topped bum boys” and black people as “piccaninnies” with “watermelon smiles”.

Referring to Johnson’s lead adviser Dominic Cummings, Butler added: “You know people by the company they keep. It’s a deliberate attempt to roll back the hard-won rights [of LGBT+ people].”

Butler also went on to comment on the lack of transgender MPs in Parliament.

Butler was recently criticised after she said ‘a child is born without sex’ during a television interview.

The MP for Brent Central and deputy leader candidate made the controversial comment while appearing on ITV’s Good Morning Britain on Monday.