Denzel Washington, an Oscar-winning actor jumped out of his car to save another Black man’s life from the hands of LAPD. Many now believe that if Mr. Washington had not intervened as a real-life hero, this Black man would have probably lost his life in the encounter with LAPD, even though the Black man had committed no offense.

The swift actions of Denzel Washington have been viewed as the new direction for many ordinary citizens to act and take actions in what appears to be Open season killings of young Black men. As a Black man, with fame or without, Denzel Washington was placing his own life in danger in order to rescue another Black man from senseless shooting in the hands of LAPD. 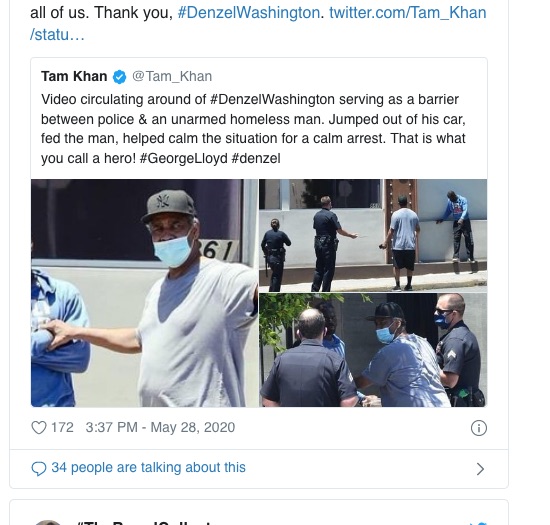 Denzel Washington’s action further demonstrates that Black celebrities and athlete MUST stand up and do their part as regards investment in the Black community and also ensure that the less opportune African American are giving the support needed to develop their communities; from a building, days care centers to assisting single mothers, and Afterschool programs and job mentorship to assist and shape the direction of young Balck men.

Waiting for the government to address these issues is like waiting for Jesus to come down from heaven. The racist criminal justice system in America is dynamic and ever-evolving.. Complex and yet effective and potent. We need more heroes like Denzel Washington.