Edo State in Nigeria has become the latest front in political struggles as God’s fatherism threatens to disrupt a progressive Governor Obasiki’s agenda.  Like many Edolite across the nation, Ambassador B. Uwaifo is outspoken, and a fearless orator as seen in this video. Free speech such as this in Nigeria had been an immediate death sentence or self exiles. Still a lip service, Nigeria is a Democratic country and supposed to embrace the freedom of expression for all Nigerians.

In reality, free speeches or press publications are not guaranteed by the military oligarchs parading themselves as democratically elected government officials. Recently the hostile attitude towards a journalist, displayed by David Oluwafemi Adewunmi Abdulateef Fani-Kayode, tells volume about the freedom of speech in the country. Nigerians at home had been traumatized, coerced, and scared to speak against oppressive rulers, since 1966. 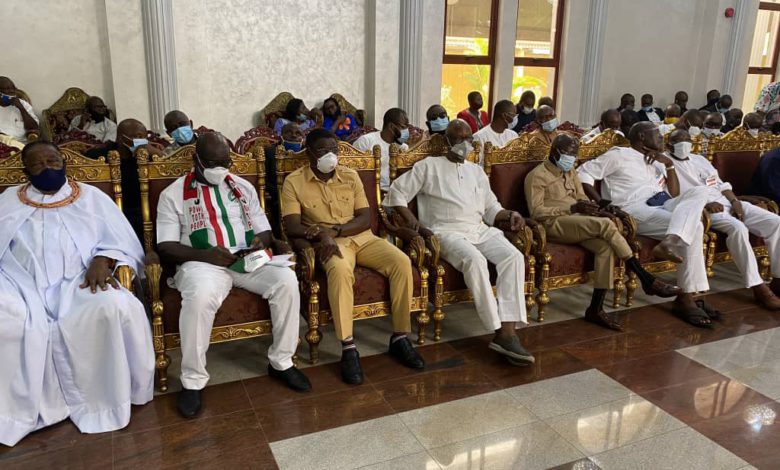 Ambassador Uwaifo pointed out one point that should not be ignored. For the sake of history, let’s examine the blue wall of silence, behind the Oba’s controversial none partisan politics.

Critics felt that Oba Ewuare was too harsh for his admonition of Phillip Shaibu the Deputy Governor, in his palace reconciliatory meeting. Nigerians must know that the Oba of Benin has a history of diplomacy in dealing with the soldiers, after the January coup d’eta of 1966.

Oba Akenzua II, 1933 to 1978, protected Lt Col. David Akpode Ejoor, the first military governor of the Midwestern Region, now made up of the present Edo and Delta States.

At the earliest stage of the Biafra Civil War, he was about to be assassinated by the then “Ojukwu rebels.” Lt Col. David Ejoor took refuge at the Oba’s palace and escaped death.

The Oba of Benin’s relationship was enhanced by the army at the Aburi Conference in Ghana, where Prince S.I.A. Akenzua served as Permanent Under-Secretary, Federal Cabinet Office, and Lt-Col David Ejoor, as a military Governor for the Nigerian government. By the way, S.I.A. Akenzua was Erediauwa the father of current Ewuare II.

Point to note, Aburi Conference was later regarded by politicians as an unconstitutionally arranged military coup leaders meeting at Aburi Accord of 1967.

The truth is deliberately ignored for fear of reprisal from the military supremacy who seized the constitutional power from Nigerians since the 1966 coup d’eta.

Oba of Benin is the custodian of African traditional institutions of our ancient Benin Kingdom.

Free Speech under the spell of the military persuasive and deceptive speeches are nepotism and favoritism, always used to win the favor, and also the suppression of traditional rulers.

This army arrangement, like the imperialists, undermined the authority and position of traditional rulers. It hampers the effectiveness of Monarchs, who are subconscious, pressured to conspire with higher public office holders to oppress the people. An indirect rule policy craftily established by imperialism.

Oba Ewuare II, had been very mindful not to offend the military indirect dictatorship, disguised as a democratic rule.

The king even reflected on his meeting with Buhari, on Jul 5, 2019, to intervene in Obaseki, Oshiomhole feud. (Vanguard). Sadly enough, the Monarch’s advocacy and concerns were belittled by Buhari’s administration.

Apparently, the UK-trained military majors since 1966, emulated the indirect rule principles. Buhari, one of the coup plotters is still in power and had been playing slickly politics with Oba Ewuare Il.

Is Time to Rename Nigeria. Rejection of Colonial Name, Education and Mentality