Enoch Adeboye sexism row: Why the Nigerian pastor is so popular

Enoch Adeboye, better known as “Daddy Go” (Daddy General Overseer), is a Nigerian pastor loved by his millions of followers, but who has once again riled critics on social media with what they say is his sexist attitude.

The 78-year-old ranks low on the flamboyance roll-call of the West African nation’s mega televangelists, but he is arguably the most popular.

He has headed the Redeemed Christian Church of God (RCCG) for nearly 40 years – and under his stewardship it has grown phenomenally.

It is rare to find in Nigeria’s mainly Christian south a street without an RCCG church, some streets have two – and its dove logo has become part of the landscape.

But the pastor’s views on marriage and gender roles has some eyes rolling in the age of #metoo – even in this conservative country.
‘Marry a woman who can cook’

He has been active on social media over the last decade – and when he posted some “lessons” for women on his wife’s birthday in July – it snowballed into a Twitter storm that sparked a big conversation about feminism.

“No matter how educated or successful you are, your husband is your head and you must regard him as such at all times,” he tweeted to his 1.3 million followers.

On Instagram he added about his wife: “It does not matter what is on her itinerary, if I say I would like you to go with me to so and so place… she would cancel whatever she was to do and come along with me.”

In a post in January, he advised his married son to sack a secretary “he was looking forward to seeing at work”, which did not go down well. 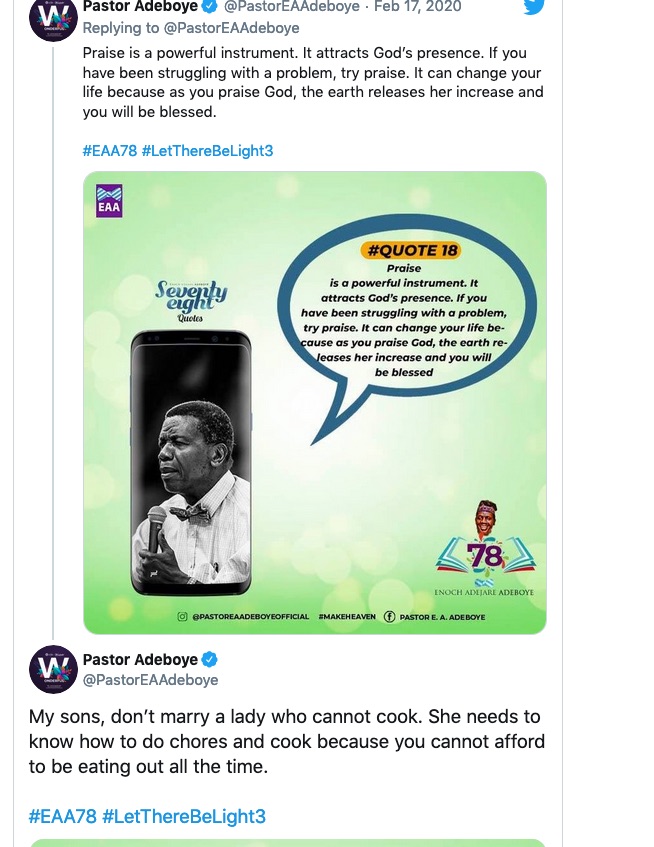 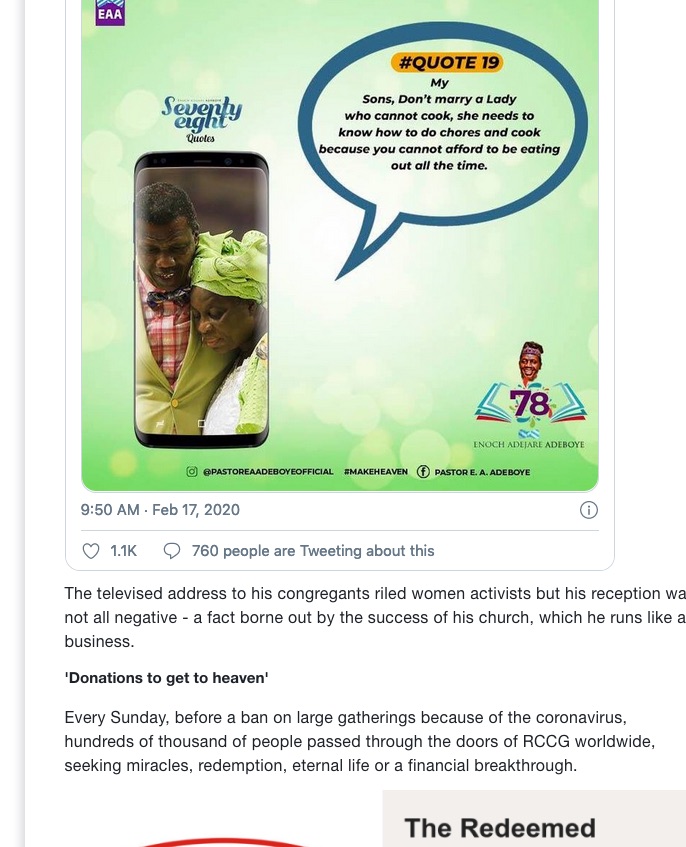 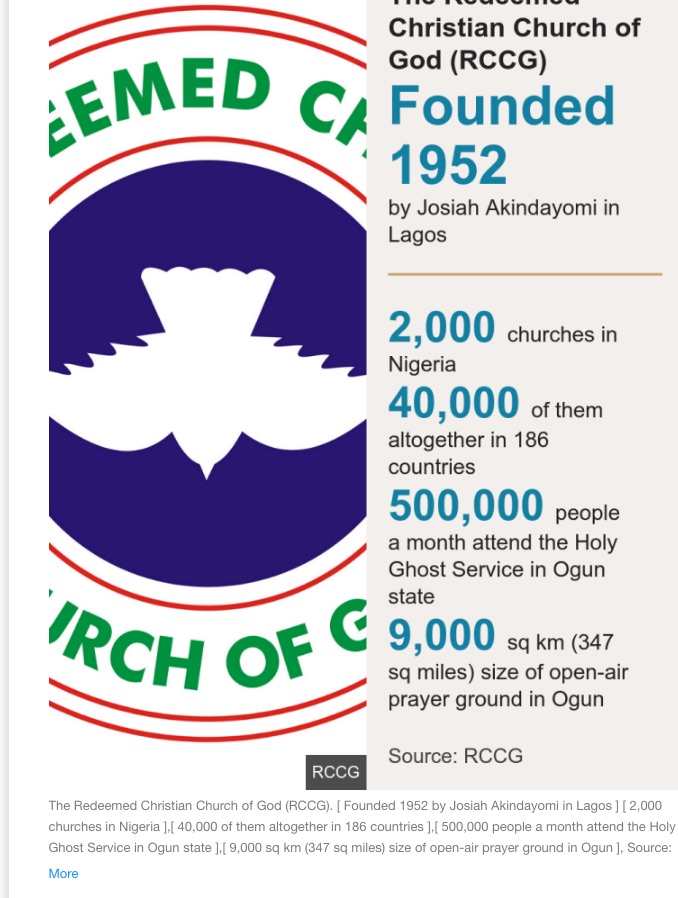 “I want to be on the side of God under tutelage of a true Christian doctrine, I found this in RCCG. Personally, I want to make it to heaven,” one church member told me in the capital, Abuja, where there is a huge prayer ground on the outskirts of the city.

Others said they were attracted by Pastor Adeboye’s “holiness”, “humility” and “adherence to that which he preaches”.

Those flocking to church are happy to offer donations or purchase church souvenirs.

Most of them agree to give 10% of their income to the church, a practice known as tithing.

“Anyone who is not paying his tithe is not going to heaven, full stop,” he told his clerics two years ago.

It is hard to know the true extent of Pastor Adeboye’s wealth, the lines are blurred between what belongs to the church and what is his – estimates of his fortune vary from $60m (£46m) to $130m. 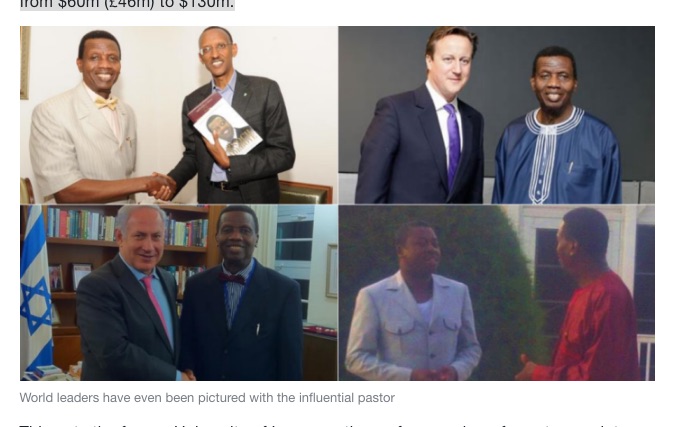 This puts the former University of Lagos maths professor, who refuses to speak to the media, in the same league as the country’s music stars, and richer than most of Nigeria’s foreign-based professional footballers.

But beside an array of bow ties that accompany his trademark safari suits and striped shirts, he looks austere compared to the flashy standards of his Pentecostal peers.

No shiny shoes, no oiled hair, his English does not rise and fall with an American accent.

Born to poor parents, he cuts a relatively humble figure and those close to him describe him as much.

Yet, he – or the church – owns a university, a Gulfstream jet and some fancy cars.
Neutral in politics

In presidential election campaigns, some candidates have made it their duty to visit his prayer sessions and to be seen praying and shaking hands with him – and his website has photos of him greeting world leaders.

His views on women – in which he often references the bible – are seen by some as unsurprising, even if some say the verses themselves can be interpreted in other ways.

“Christianity and religions are the enforcers of patriarchy, so it’s not far-fetched that a religious leader would be holding on such a view,” Martha Edem, a Christian Nigerian writer, told me.

She described his “birthday tweets” as a missed opportunity to teach couples mutual respect and love.
You may also be interested in:

The man who changed the face of Christianity in Africa

African church preaching gospel in US

But even some gender activists in the deeply religious country do not want to take him on.

“For me it is down to the individual interpretation… I can’t judge a man of God, Christianity is a religion of conviction,” gender activist and academic Abigail Ogwezzy-Ndisika said.

The wealth of Nigeria’s mega pastors often make them a soft target for those who perceive them as exploitative.

Some suggest Pastor Adeboye should use his influence more with politicians – after all even the current Vice-President Yemi Osinbajo is an RCCG pastor.

To be fair, he led a peaceful march in February to highlight the insecurity in the country.

He has shown he is measured about his involvement in politics – not siding with one party or another.

But those expecting him to be more neutral about his views on marriage and a woman’s role in the home, will have to wait a long time.

Haitians remain steadfast as they honor their...