It was a day of unforgiving heat and jubilation in which a debonair Duduzane Zuma, who became a favourite, was seated in the stands with supporters who were eager to capture a moment with the son of former statesman Jacob Zuma.

The party expected 25 000 people to attend – from the 11 000-capacity stadium and two overflow areas.

While stadiums seats were filled to capacity with people clad in green and gold, in the field there were pockets of party supporters who braved the gruelling heat.

Eskom, unemployment, skills development, land and South Africa’s fragile economy remained top of the party’s list of priorities with the president getting tough on corruption, once again identifying it as a hindrance in a developmental state.

“We will intensify our efforts to end state capture in all its forms, ensure those responsible are held accountable and that all money stolen from the government or public bodies is recovered. There should be no place to hide, anywhere in South Africa and the world, for criminals – whether in the public or private sector – who have stolen from our people,” he said.

Ramaphosa said SOEs were facing great difficulties and he focused on rolling blackouts in the country.

Eskom, the embattled power utility, resumed load shedding despite Ramaphosa’s earlier promise to the country that there would be no blackouts for the duration of the festive season.

And Ramaphosa’s deputy, David Mabuza, threw a spanner in the works this week when he said the president was misled, leading to the resignation of Eskom board chairperson, Jabu Mabuza.
“Let me clear, we are not going to privatise Eskom. We will rebuild it and strengthen it,” Ramaphosa said in response to ongoing privatisation rumours.

This rumour has been fuelled by the ANC’s alliance partner, trade union federation Cosatu.

The president said priority needed to be given to the urgent necessary work required for Eskom.

“We will also act with renewed determination to stabilise and rebuild state-owned enterprises so they serve as catalysts to investment and the provision of economic and social infrastructure.”

He commended the government for placing South African Airways under business rescue.

READ: ANC will continue to unite the country – Ramaphosa

Ramaphosa said the most direct and effective way of reducing inequality was to create employment and economic opportunities that were mostly targeted at the youth and women, adding that job creation remained at the heart of the country’s agenda.
He said the government would continue implementing measures outlined in their 2018 manifesto which include an increase in investment, massive infrastructure build programmes, making it easier to do business and expanding the pathways for young people into the job market.

Quoting and recalling the ANC’s first secretary general, Sol Plaatje, on the plight experienced by many who were dispossessed of land, the president referred to it as a persistent injustice that the ANC was addressing through its accelerated land reform programme.

“We call on all farmers, farm workers and traditional leaders to work together in support of meaningful land and agrarian reform, to build relations of trust and respect within rural communities, and to significantly expand food production and ensure food security.” 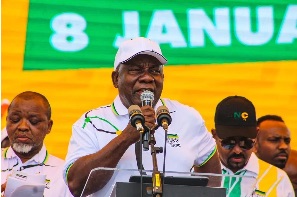