A plot that included plans to overthrow the government and kidnap Michigan Governor Gretchen Whitmer was thwarted by the FBI.

The plan, according to a report filed on Thursday by the Detroit News‘ Robert Snell, is said to have seen those involved reaching out to militia members.

“Several members talked about murdering ‘tyrants’ or ‘taking’ a sitting governor,” an FBI agent said in an affidavit that was filed in the hours after the agency raided a home in Hartland Township as part of the investigation into the death of a Detroit man who was killed during an FBI shootout.

Six men are said to be charged with conspiring to kidnap the governor. One of them, 24-year-old Ty Garbin, is said to be the same man whose home was raided on Wednesday.

As news of the thwarted plot broke on Thursday, many were quick to point out a Trump tweet from April in which he said “LIBERATE MICHIGAN!” 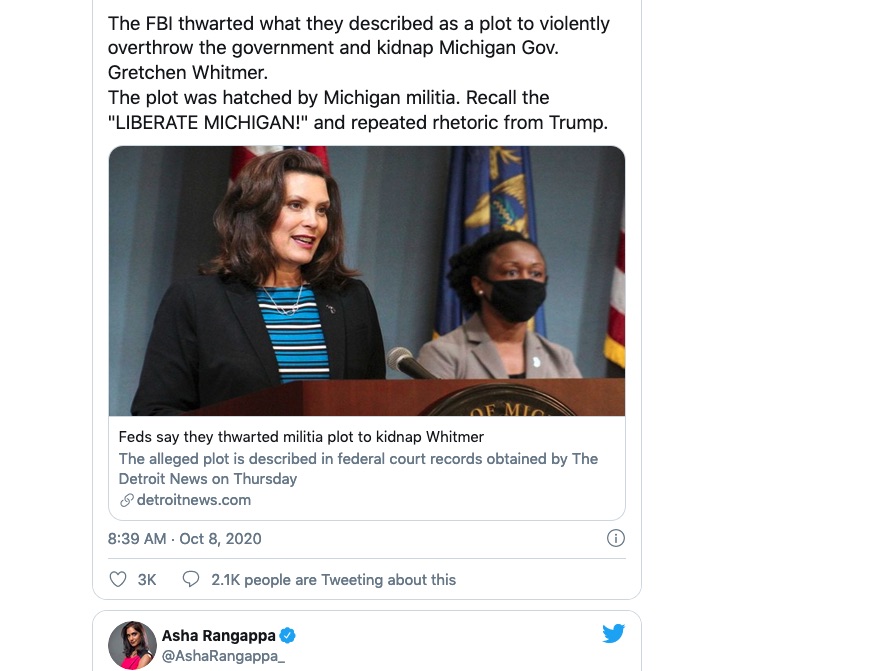 Eric Allport was fatally shot during a recent attempted arrest in connection with a federal weapons offense. Allport, as Tess Owen explains at length in this investigative Vice piece from earlier this week, has since been turned into a “new martyr” for the so-called Boogaloo Bois. The Southern Poverty Law Center notes that those who choose to align themselves with the group are “bound together predominantly” by a desire to “mount an armed insurrection against the government.”

Thursday’s report did not immediately identify the specific “militia group” that the FBI had been tracking since March. An account of a meeting including people “from multiple states” was held in June, with discussions being captured via secret recording methods by a confidential source for the agency.

How the Politics of Lies and Deception...