As a former wide receiver in high school and college, Phillip Blanks has good hands.

As a retired U.S. Marine, Blanks was trained to “always be on high alert, not be complacent and to have discipline,” he said.

Blanks employed all of those skills last week when he caught a 3-year-old boy who was tossed from a burning building just as the child was about to hit the ground.

The one-time member of the football team at Saddleback College in Mission Viejo was visiting a friend’s apartment in Phoenix on Friday when he heard people yelling outside. Without taking the time to put his shoes on, Blanks ran out and saw the top floor of the apartment complex engulfed in flames.

A woman stood on the balcony of one of the apartments, holding a toddler.

“People started yelling for the lady to throw her kids down,” Blanks told the Washington Post.

So she did — and Blanks sprang into action. 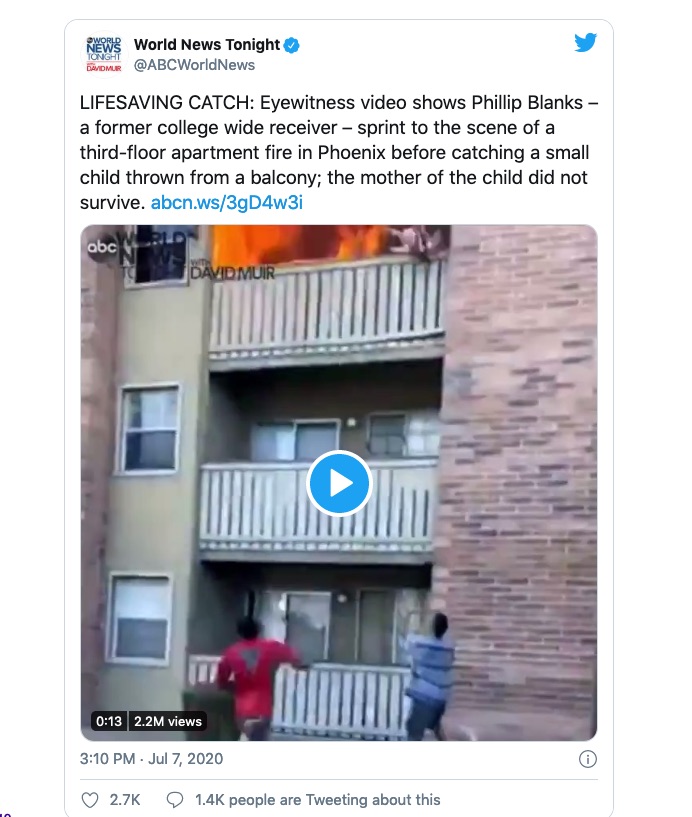 “I immediately got tunnel vision of the baby and somehow managed to catch him,” Blanks, 28, said.

Blanks and others wrapped the boy in a blanket and tried soothing him until an ambulance arrived.

The boy’s 8-year-old sister was rescued by D’Artagnan Alexander, 42, another bystander, who ran into the building to save the girl. Both children have been hospitalized with serious, but non-life-threatening, injuries, Blanks told the Post.

Their mother, Rachel Long, 30, died in the fire, according to local media outlets.

Blanks and Alexander have since met with the children’s father, Corey Long.

“It was very emotional,” Blanks told the newspaper of the meeting. “We became family, all three of us.”

Blanks, who played for the Gauchos in 2016 and now works as a bodyguard in Arizona, told Mlive he hopes to remain involved in the children’s lives.

“I know they had a traumatic experience and I know that their lives have changed forever,” he said.

Trump the victim: President complains in private about the pandemic hurting him

Pastor Who Claimed To Cure Coronavirus With...