Visibly shaken, King told viewers: “I am speechless. I am really, really speechless about what we’re seeing on television this morning. It feels to me like open season … and that sometimes it’s not a safe place to be in this country for black men.”

King was responding to “CBS This Morning’s” report on the shocking case involving a white woman in Central Park who was recorded on cell phone video by a black man as she calls in a false accusation to 911 that the man is threatening her life. The video has stirred widespread outrage as it evokes the long history of false accusations against black men that have led to death, imprisonment and other grave consequences for the wrongly accused.

Earlier in the broadcast, “CBS This Morning” reported on a case unfolding in Minneapolis in which a black man died after being arrested on suspicion of forgery. A video of part of the incident shows the suspect being held down on the street by a police officer who had his knee pressing down on the man’s neck. The man can be heard on the video clip telling police “I can’t breathe” and pleading for relief. In the video captured by a passerby, other bystanders can be heard urging the police to ease up on the man’s neck.

According to the Washington Post, the man believed to be in his 40s died early Tuesday. King, who is African American, told viewers the two incidents were overwhelming to her.

“As the daughter of a black man and the mother of a black man, this is really too much for me today. I’m still rattled by that last story (from Minneapolis),” King told viewers during the “What to Watch” segment of “CBS This Morning” in which King and co-anchors Anthony Mason and Tony Dokoupil discuss headlines and pop culture trends. 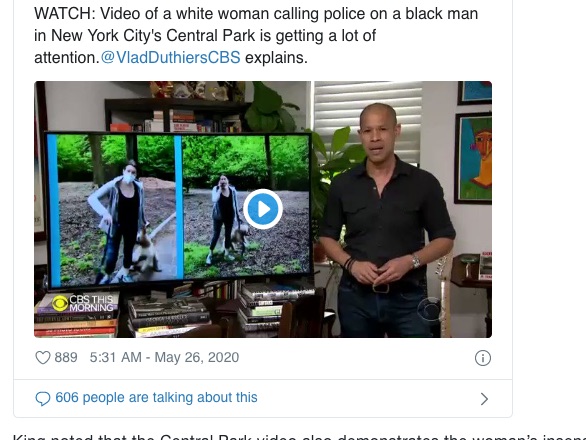 King noted that the Central Park video also demonstrates the woman’s insensitivity to her dog. That incident began when an African American man identified as Christian Cooper asked the woman, identified as Amy Cooper, to put her dog on a leash in an area where leashes are required. Christian Cooper began filming the encounter on his phone when Amy Cooper reacted angrily to his request. Amy Cooper has since issued an apology for her actions, according to CNN.

In the video, Amy Cooper asks Christian Cooper to stop filming and threatens to call police and tell them that “there’s an African-American man is threatening my life.” Christian Cooper encouraged her to call police and does not appear, according to the video, to make any threatening moves toward Amy Cooper. While she frantically calls 911, Amy Cooper also struggled to keep hold of her dog and is seen yanking the animal by its collar.

“She’s practically strangling her dog to make these false accusations against another black man,” King said, her voice shaking. “I’m still so upset by that last story. A man is handcuffed underneath a car and people are pleading and we’re watching a man die. We go from that story now to this story where she falsely accuses a black man. I don’t even know what to do or how to handle this at this particular time.”

Amy Cooper told CNN that she wanted to “publicly apologize to everyone.” She has been placed on administrative leave by her employer, Franklin Templeton investment advisors. The video went viral so quickly on the Memorial Day holiday that the firm addressed the situation on its social media platforms late Monday night.

“We take these matters very seriously, and we do not condone racism of any kind,” Franklin Templeton wrote. 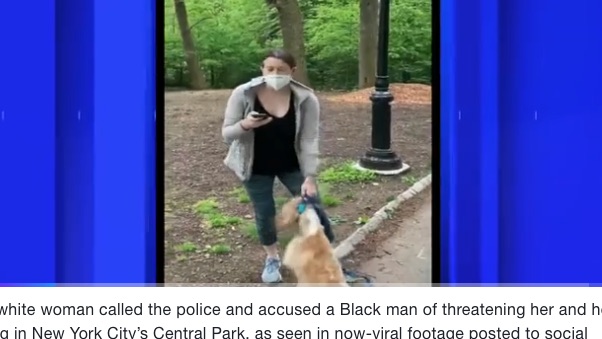 The Golfing President. Trump goes golfing as US deaths edge towards 100,000.