A white man in Minneapolis asked whether black men were entitled to use the same gym and threatened to call the police on them, amid protests at George Floyd’s death.

The exchange between black gym users and a white man was posted online in an Instagram video on Tuesday before spreading on social media.

It showed Tom Austin, who worked at the same Mozaic building in Minneapolis, accusing young black men of not being tenants there.

“I’m a tenant here. Are you?” says Mr Austin in the video posted on the Instagram page for the group’s business account, Top Figure, which uses the same co-working space.

Mr Austin continues to challenge them and asks: “What office? What office are you in?”

“So we have an office here and this guy came accusing us [saying] we can’t be here”, says one black man to the camera.

Mr Austin then appears to phone 911, whilst a black man comments: “As you guys can see we’re dealing with racism here”.

The young men wrote in the caption to their Instagram post that: “We all pay rent here and this man demanded that we show him our key cards or he will call the cops on us.”

It continued: “We are sick and tired of tolerating this type of behavior on a day to day basis and we feel that we had to bring light on to this situation.” 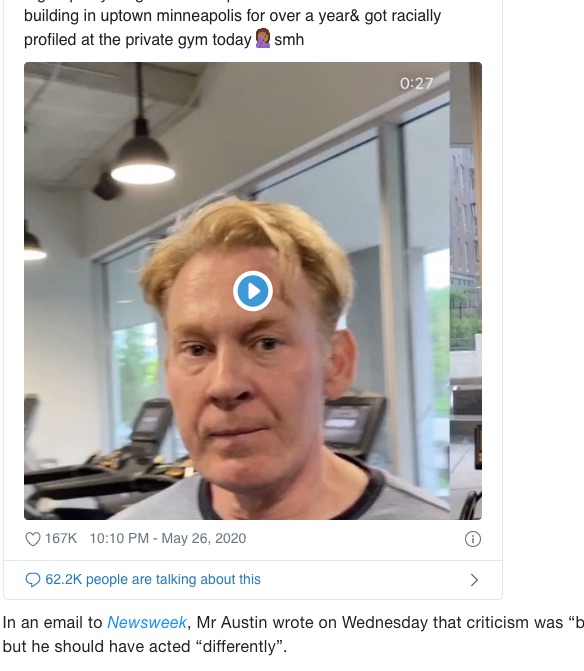 In an email to Newsweek, Mr Austin wrote on Wednesday that criticism was “b******t” but he should have acted “differently”.

He added that his actions were “regardless of race” because the group was “threatening” and it was building policy to ensure tenants only had access to amenities.

The Minneapolis Star Tribune reported on Wednesday that Mr Austin’s lease at the co-working space had been terminated following the encounter.

It comes days after New Yorker Amy Cooper threatened to call police on a black man in Central Park.

Minneapolis has also been the site of clashes between police and demonstrators this week amid nationwide anger at police actions in George Floyd’s death.

IS THIS MAN THE “JESUS” AFRICANS HAVE...