Give Us Back What Our Ancestors Made

written by Victor Ehikhamenor. Mr. Ehikhamenor is an artist. January 29, 2020

Africans shouldn’t have to travel to Western museums to see the artworks looted from their continent.

LAGOS, Nigeria — There is an axiom of my elders: The earthworm says it used to own a lot of gold jewelry, but now that it burrows the earth and covers itself in mud, no one believes it. As a Nigerian, I’m reminded of that whenever I encounter some of the exquisite objects looted from Benin City, in southern Nigeria, in Western museums.

I always feel a strong urge to tell others around me that these works belong to my country, but I know they would doubt me because a revered Western institution claims them as its own. These artworks, recognized as masterpieces but sometimes dismissed as primitive, ethnographic or animist, have inspired my art over the years, even in my few encounters with them. If returned to where they belong, these artworks would have a great impact on the future of Nigerian contemporary art.

In 2017, when I was preparing for a solo exhibition in London, I visited the British Museum for the first time to see the famed works known as the Benin Bronzes — which, unlike the name implies, are not all bronzes — and other artifacts that were looted during a devastating lash of desecration in 1897. That year, British troops sacked Benin City, which was then the capital of the Kingdom of Benin, and ousted the king, Oba Ovonramwen.

An untold number of artworks were seized from the oba’s palace. Some of these artworks ended up in other countries, but many are now housed at the British Museum and other British institutions. In recent years, it has become clear that some of the soldiers involved in the expedition — carried out to punish the kingdom for an earlier encounter that ended in British deaths — also kept objects for themselves, leaving a gaping hole in Nigeria’s art history.

Nothing prepared me for the emotional wrench I felt when I stood before the columns of brass plaques suspended from vertical rods at the lower level of the museum as if they were washed old underwear left to dry in the wind. At shrines and altars back home, such works have context and meaning; in the clinical setting of the museum, they seemed diminished and out of place.

The work that left me the most dejected was the Queen Idia mask, an ivory pendant from the 16th century honoring the mother of Oba Esigie, who wore it on his hip during ceremonies. It was like happening on a long-lost family member in a foreign country. I had the same sense of melancholy when I encountered another Queen Idia mask, which I have incorporated in my own artwork, at the Metropolitan Museum of Art in New York in 2019.

Since the works were removed from their rightful place, the importance and meaning of the Queen Idia mask were not lost on subsequent kings, artisans and artists from Benin City and Nigeria in general. In the 1960s, the image of Queen Idia was used as the icon for the new Society of Nigerian Artists. In the 1970s the mask was the emblem of the Second World Black and African Festival of Arts and Culture, known as FESTAC ’77. Sadly, when the Nigerian government requested to show the original during the festival, Britain refused, claiming the piece was too fragile to travel. Nigeria had to do with a reproduction by Joseph Alufa Igbinovia, who had to rely on photographs taken of the one in London.

That wintry day at the British Museum, I realized that many Nigerians have never laid their eyes on such an important part of their history. There in a foreign land, behind glass cases, were heirlooms whose significance was lost on the vast majority of the museum-visitors sauntering by.

The bronze heads and carved ivory tusks we see in Western museums today once formed greater cultural purposes at the oba’s palace. The bronze plaques like the ones at the British Museum served as records of rites and documents of visits by dignitaries.
Today, only a very few of our ancestors’ early artifacts can be seen at museums in Africa. Many artists of my own and future generations would greatly benefit from having emblematic artworks, such as the Queen Idia masks, nearby for reference. Artists would be able to create their own vernacular based on the close study of these works. 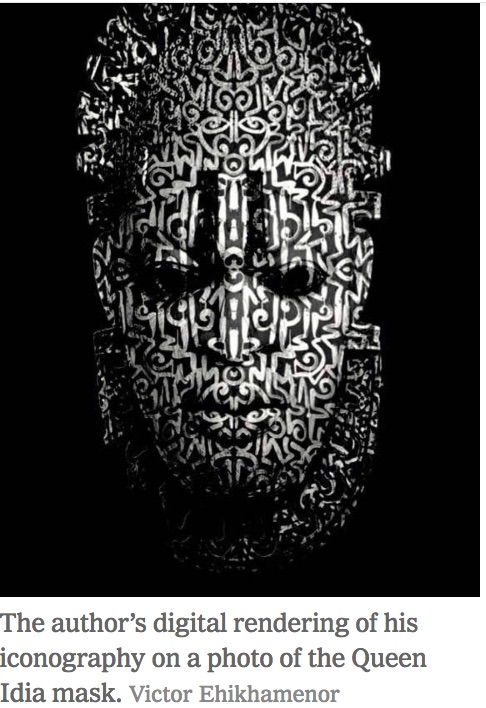 Most of the bronze statuettes that formed part of my installation at the 2017 Venice Biennale, where I was part of the Nigeria Pavilion, were made in the traditional way, the lost wax process, by bronze casters on Igun Street in Benin City, where the majority of the ancient Benin Bronzes were made. The casters are finding little work these days, as appreciation for their work dwindles in a society that is far removed from its cultural relics.

The British Museum, the institution that holds the largest trove of the art from Benin City in need of restitution, has been adamant about keeping the works. It has offered only to lend some of the Benin Bronzes, and for a few years, when the Benin Royal Museum, scheduled to be completed by 2023, is ready. This is an insult.

Generations of Africans have already lost incalculable history and cultural reference points because of the absence of some of the best artworks created on the continent. We shouldn’t have to ask, over and over, to get back what is ours.

Victor Ehikhamenor is an artist and the author of the essay collection “Excuse Me! One Nigerian’s Funny Outsized Reality.”

The Times is committed to publishing a diversity of letters to the editor. We’d like to hear what you think about this or any of our articles. Here are some tips. And here’s our email: letters@nytimes.com.

To end Police Brutality in America, we...

After a Black man on death row...