Home PoliticsAfrica News Half of Queens residents are white, but 90% of social distance arrests just this week were of people of color
Africa NewsAsia NewsBreaking NewsCaribbean NewsUS NewsWorld News

Half of Queens residents are white, but 90% of social distance arrests just this week were of people of color

This week, 20 residents in Queens, New York, were arrested for social distancing

Of them, 18 — or 90% — were people of color, the district attorney’s office told Business Insider.

“My office will not be prosecuting social distancing arrests,” Queens District Attorney Melinda Katz said. “Nobody wants a health crisis to fuel a criminal justice crisis.”

The news follows an announcement from Brooklyn’s district attorney that 39 of 40 social distancing arrests made in the last few weeks were for people of color.

In the Queens borough of New York City, which is 47.9% white, police officers have arrested at least 20 people over social-distancing issues since May 3.

Out of those 20 people, 16 were black or Hispanic, two were Asian, and two were white, a representative for the Queens District Attorney’s Office told Business Insider. That means 90% of those arrested were people of color.

“My office will not be prosecuting social distancing arrests,” Queens District Attorney Melinda Katz told Business Insider through a spokesperson. “Nobody wants a health crisis to fuel a criminal justice crisis.”

“We are committed to nondiscriminatory and even-handed enforcement of all laws, not just social distancing laws,” Katz’s spokesperson added.

A spokesperson for Katz’s office said the arrests were made in a time period beginning Sunday, May 3, and that the “cases are not readily identifiable due to the charge imposed.” The “roughly 20 arrests” were “related to alleged failure to comply with the City’s social distancing mandate.” 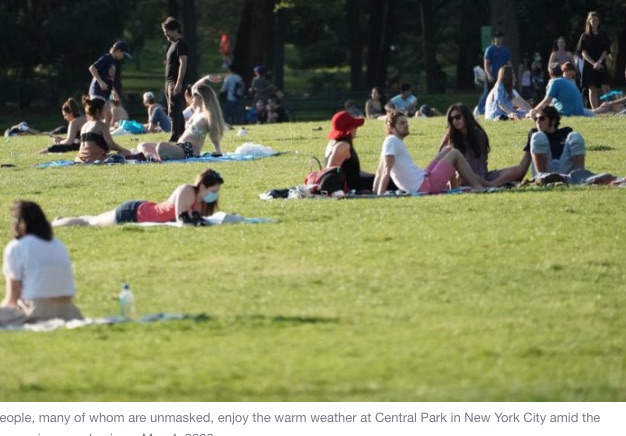 The spokesperson did not provide information about how many arrests were made since mid-March, when the social distancing guidelines were first issued. According to NYPD data released Friday and reported by the Queens Eagle, police issued 28 summonses in Queens between March 16 and May 5, 26 of which were issued to people of color.

According to the New York Times, police officers throughout New York City have made at least 120 arrests for social distancing violations between March 16 and May 5. Deputy Police Commissioner Richard Esposito told the Times that black and Hispanic people make up 92% of those arrested on charges of violating the rules in that time period.
‘Stark racial disparities’ in social distancing enforcement

The New York Police Department has faced widespread criticism over its discriminatory policing practices, both before and during the pandemic.

Social media has demonstrated a disparity in how different races have been treated by police. The NYPD posted a photo on Twitter this past weekend of an officer distributing masks to a white woman. A few days later, a video trended of officers beating and arresting people of color for apparently not social distancing.

Racial justice advocates are calling for Mayor Bill de Blasio to significantly limit the NYPD’s presence on the streets.

“Mayor de Blasio must take action today to remove the NYPD from social distancing enforcement,” Loyda Colon, a leader of Communities United for Police Reform and co-director of Justice Committee, said in a statement to Business Insider.

“The stark racial disparities reflected in the initial release of NYPD social distancing enforcement data confirms what we already knew about police officers brutalizing Black New Yorkers and other New Yorkers of color during the COVID-19 pandemic,” Colon added.
A trend of racist policing has surfaced across New York City

In the six weeks since March 17, police officers in Brooklyn have arrested 40 people for violating social-distancing rules.

Thirty-five of the people arrested were black and four Hispanic. Just one is white, even though 49.5% of Brooklyn residents are white, according to the US Census Bureau.

All 40 cases have been dropped.

The arrest data, which was voluntarily released by the office of Brooklyn District Attorney Eric Gonzalez, is consistent with recent concerns that the New York Police Department’s social-distancing enforcement overwhelmingly targets communities of color.

“We did an analysis because that’s an issue we’re concerned about,” a spokesperson for Gonzalez told Business Insider, noting that there is no discrete category for social-distancing enforcement, which could make it harder to track.

“The enforcement should consist of giving masks and sanitizer and so forth. That should be the way this issue is being enforced,” the spokesperson added.

“The disparity in the numbers does NOT reflect our values. We HAVE TO do better and we WILL,” de Blasio tweeted.

The district attorney offices of the Bronx, Manhattan, and Staten Island did not immediately respond to Business Insider’s requests for comment.

Ahmaud Arbery: How the killing of an unarmed black jogger is drawing fresh attention to stand your ground laws

Arbery Video Was Leaked by a Lawyer Who Consulted With Suspects