The husband of the Los Angeles district attorney has been charged with multiple firearm assaults after he pointed a gun at Black Lives Matter activists and said, “I will shoot you.”

David Lacey, whose wife Jackie Lacey is the elected prosecutor currently running for re-election, is facing three misdemeanor charges for pointing his firearm at three organizers who were protesting outside their house on 2 March, the day before the primary election. The charges come from the state attorney general’s office.

The incident was captured on video and showed David Lacey opening his door and threatening the demonstrators, saying, “Get off of my porch. I will shoot you … I don’t care who you are … We’re calling the police right now.” He appeared to have his finger on the trigger.

Close to the door was Melina Abdullah, a Black Lives Matter Los Angeles leader, who said on the video: “He pulled a gun and pointed it at my chest.” 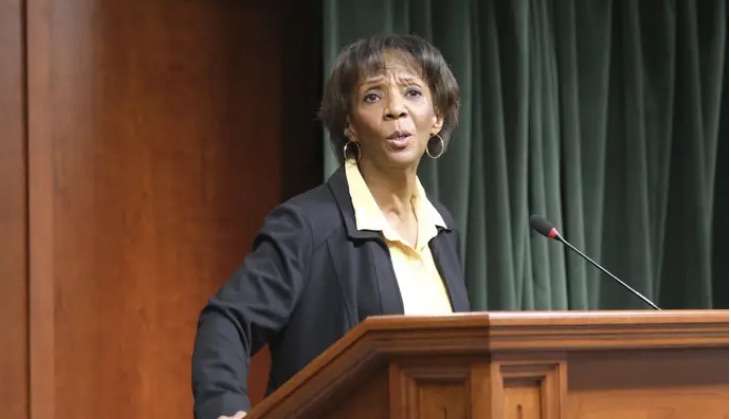 Abdullah, who has been protesting against Jackie Lacey for years over her refusal to prosecute officers who kill civilians, told the Guardian on Tuesday that she was surprised to learn of the charges from the media, and said she had not had any contact with the attorney general or the district attorney.

She also pointed out that the charges were misdemeanors and that prosecutors typically file more serious felony charges for firearm threats like the one clearly captured on footage against her.

“Had it been anyone else who pointed a gun at someone’s chest, at three people in fact, and said the words, ‘I will shoot you’, we know they’d be getting more than misdemeanors,” said Abdullah, who is also a professor of Pan-African studies at Cal State LA. “The system is there to protect themselves.”

Samuel Tyre, an attorney for David Lacey, said in an email that his client was “disappointed that the attorney general’s office felt that the conduct at issue amounted to criminal behavior”, adding, “We disagree entirely with their assessment, but we have the utmost faith in the justice system, and we are confident that the correct result will be reached.”

Tyre declined to comment on the specifics of the case, but added, “my client’s human instinct is forever and always to protect his wife and his family and to keep them safe from physical harm”.

Lacey had promised last fall to meet with Black Lives Matter activists who have long called for her to address police violence, but the meeting never happened, organizers said at the time. Using a tactic that has become common in recent protests, a group of about 30 protesters showed up to Lacey’s Granada Hills home in the early morning. They brought chairs with them saying they were going to hold the community meeting that they had been promised. There were no threats of violence from the demonstrators.

Abdullah said it seemed the charges were meant to “placate the community”, adding, “It’s trying to give us the illusion that there is justice.”

She also said it had taken time for her to process what happened, though she has continued to be a vocal presence at the demonstrations against police violence in recent months. The incident affected her whole family, she said, noting that her children had to leave their classrooms when it happened: “It’s not only weighed on me.”

Hours after the original incident, Jackie Lacey offered a tearful apology to reporters, saying she and her husband were frightened.

The DA’s office declined to comment on Tuesday and Lacey’s campaign did not immediately respond to an inquiry. Lacey is facing a tough re-election fight in November and has long faced criticism for her handling of killings by police, her aggressive pursuit of the death penalty and other tough-on-crime strategies.

One American is dying every 80 seconds from coronavirus as Trump shrugs off death toll: ‘It is what it is’