In recording Trump asks how long Ukraine can resist Russians

President Donald Trump inquired how long Ukraine would be able to resist Russian aggression without U.S. assistance during a 2018 meeting with donors that included the indicted associates of his personal attorney Rudy Giuliani.

“How long would they last in a fight with Russia?” Trump is heard asking in the audio portion of a video recording, moments before he calls for the firing of U.S. Ambassador to Ukraine Marie Yovanovitch. She was removed a year later after a campaign to discredit her by Giuliani and others, an action that is part of Democrats’ case arguing for the removal of the president in his Senate impeachment trial.

A video recording of the entire 80-minute dinner at the Trump Hotel in Washington was obtained Saturday by The Associated Press. Excerpts were first published Friday by ABC News. People can be seen in only some portions of the recording.

The recording contradicts the president’s statements that he did not know the Giuliani associates Lev Parnas or Igor Fruman, key figures in the investigation who were indicted last year on campaign finance charges. The recording came to light as Democrats continued to press for witnesses and other evidence to be considered during the impeachment trial.

On the recording, a voice that appears to be Parnas’ can be heard saying, “The biggest problem there, I think where we need to start is we got to get rid of the ambassador.” He later can be heard telling Trump: “She’s basically walking around telling everybody, ‘Wait, he’s gonna get impeached. Just wait.’” 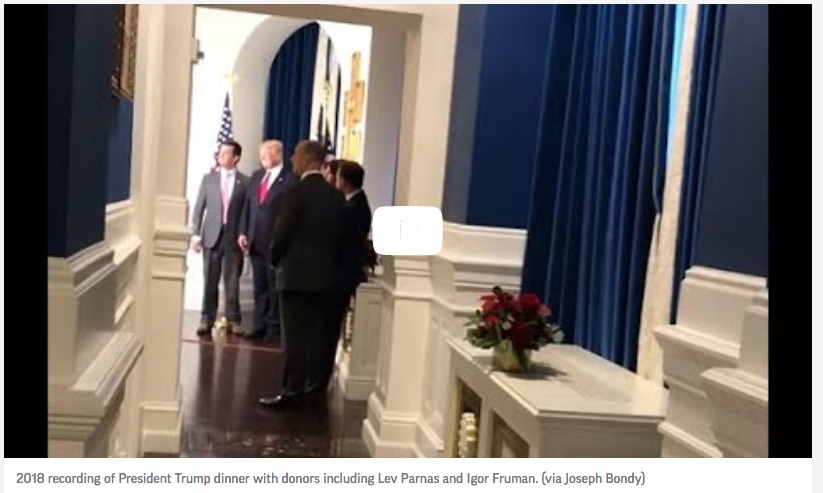 Ukraine came up during the dinner in the context of a discussion of energy markets, with the voice appearing to be Parnas’ describing his involvement in the purchase of a Ukrainian energy company.

At the beginning of the video, Trump is seen posing for photos before entering the blue-walled dining room. A voice that appears to be Fruman’s is heard saying that “it’s a great room” before a chuckle. “I couldn’t believe myself.”

Also visible in the video are the president’s son Donald Trump Jr. and former counselor to the president Johnny DeStefano. Jack Nicklaus III, the grandson of the golf icon, and New York real estate developer Stanley Gale also attended the event for a pro-Trump group.

Just a few minutes into the conversation, Trump can be heard railing against former President George W. Bush, China, the World Trade Organization and the European Union. “Bush, he gets us into the war, he gets us into the Middle East, that was a beauty,” Trump says. “We’re in the Middle East right now for $7 trillion.” He later says: “China rips us off for years and we owe them $2 trillion.” The president blames the WTO because it “allowed China to do what they’re doing.”

“The WTO is worse,” than China, he declares. “China didn’t become great until the WTO.”

Trump also seemed to question the U.S. involvement in the Korean War: “How we ever got involved in South Korea in the first place, tell me about it. How we ended up in a Korean War.”

Trump provided the guests with an update ahead of his first meeting with North Korean leader Kim Jong Un, revealing that he’d settled on a date and location. One of the people in attendance sought to pitch a different location: Songdo, South Korea, which is 70% owned by Gale International and features a Nicklaus-designed golf course.

“You know that Kim Jong Un is a great golfer,” Trump is heard telling the guests, who roar with laughter.

Trump also discussed the border crisis and plans for a border wall with Mexio, insisting that he wants to build a concrete wall but had heard from law enforcement officials that it isn’t viable. “You do have to be able to see through the wall, I think,” Trump says. He says drug dealers would throw heavy bundles of drugs over the wall, which could kill Border Patrol agents.

“They have a catapult and they throw it over the wall, and it lands on the other side of the wall and it can hit people. Can you imagine you get hit with 100 pounds?” the president says. “The whole thing is preposterous. I would’ve loved to have seen to see a concrete wall, but you just can’t do that.”

Toward the end of the dinner, the discussion turns to the upcoming election and media.

“I think cable TV is OK. If we ever lost an election, cable TV is dead,” he says, the party goers laughing. “Can you imagine if they had a normal candidate? It’s all they talk about. If they had Hillary, crooked Hillary, their ratings would be one-fifth.”

Trump says that he believes he would have had a harder time in 2016 if Bernie Sanders had been the Democratic nominee.

Near the end of the dinner Parnas can be heard presenting what he says is a gift to Trump from “the head rabbi in Ukraine” and rabbis in Israel drawing a parallel between Trump and the messiah. “It’s like messiah is the person that’s come to save the whole world. So it’s like you’re the savior of the Ukraine.”

“All Jew people of Ukraine, they are praying for you,” Fruman says, as Parnas tells Trump to show the gift to Jared Kushner, the president’s Jewish son-in-law and senior adviser, to explain its meaning. In the video, it appears Fruman is seated across the narrow part of the rectangular table and one seat over from the president.

Trump also tells the assembled guests that it is “ridiculous” and “wrong” that he can’t hold political fundraisers inside the White House, saying it would save the government money compared to driving him the four blocks to his hotel.