Mozambique has become the latest African stronghold of Islamic State (IS) after well-armed insurgents captured a strategic port in the north of the country.

Fighters affiliated to IS overran the port of Mocimboa da Praia after several days of fighting earlier this week. The city is now under Sharia law, according to The Times.

The latest reports say government troops are still battling to regain control of the city and hundreds of reinforcements have been rushed to the battle, the Guardian reported, on Sunday. Mercenaries from Russia and South Africa have also been in combat for the government, said the report.

The Mozambican defense minister, Jaime Neto, said that the extremists had infiltrated parts of the port and “attacked the town from the inside out, causing destruction, looting, and the murder of defenseless citizens”, according to a report from the local Zitamar news agency. 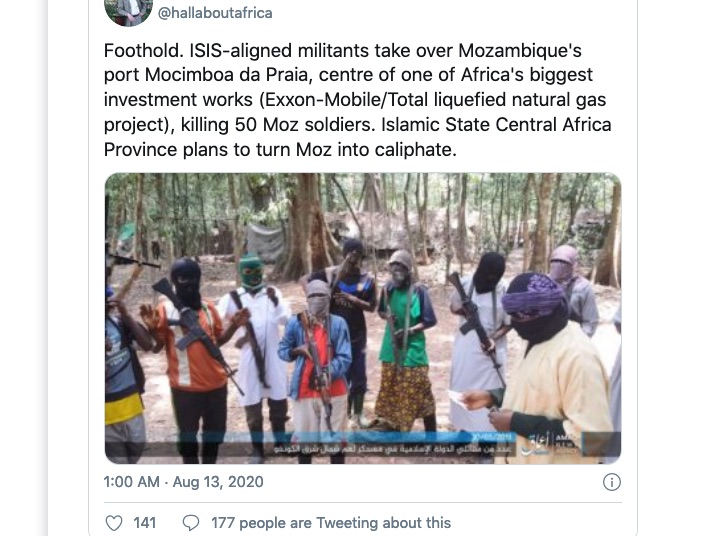 A conflict has been bubbling in the region for three years with local jihadists who align themselves with the Islamic State franchise – called the Islamic State Central Africa Province – growing in confidence and military strength. Since 2017, monitoring groups say more than 1,500 people have been killed and at least 250,000 displaced from their homes in the area, reports Al Jazeera.

Cabo Delgado is a Muslim majority province and the Islamic militants have been able to exploit local grievances and economic hardship to rally fighters around the IS flag. Almost 20% of Mozambique’s 32 million population are Muslims.

The loss of the city is a severe blow to impoverished Mozambique. It is in the gas-rich northern province of Cabo Delgado where energy giants, such as the French-owned Total, are planning to develop offshore gas projects worth up to $60 billion, according to Al Jazeera.

A deal struck in July, which meant Mozambique would receive $14.9 billion in debt financing from Total, was one of the largest single investment projects on the continent, according to Foreign Policy.

Trump Attempted a Coup. Here’s Why That...