When coronavirus lockdowns spread nationwide in March, millions of Americans flocked to their local grocery stores and wholesale markets to stock up for what would become months stuck at home. Black Americans did the same, but some had one addendum to their shopping list: a firearm.

Since the beginning of the pandemic, there has been growing interest among African Americans in arming themselves, as evidenced by increased membership in Black gun owner organizations.

That interest ballooned in the wake of George Floyd’s death, which reignited debate about public safety and the role of police in Black communities. Sensationalized stereotypes about Black Americans and guns, however, are also being used by critics of the anti-racism protests to justify a security crackdown in urban areas, many with large Black communities.

The rush to purchase weapons and ammunition is not unique to one race — more Americans across the board are arming themselves this year, including those who are not legally eligible. However, new Black gun owners see firearms as a tool of both empowerment and self-defense.

Phillip Smith, president of the National African American Gun Owners’ Association, said his organization’s annual membership has increased by up to 2,000 new members per day — a figure he used to see annually. His organization has grown to more than 30,000 members this year and has an online following of nearly 90,000 people.

The influx of interest in gun-owning — and seeking membership in Black gun owner organizations — began as soon as the pandemic set in. Fears of a damaged economy, disrupted supply chain and slow-moving federal response inspired people to take up arms.

“If you have a half a brain in your head even saying, ‘Oh, this might get serious, let me plan accordingly,” Smith explained.

The Floyd protests, he added, were a “line in the sand” for many of his new members. Leaders of other Black gun ownership organizations echo this response, saying the spike owes to a range of concerns many Black Americans have.

“Whether it was fear of a food shortage, lack of a grocery store, the short response times for law enforcement or whether people were just fearful they were going to be attacked, I don’t know,” said Derrick Morgan, national commander of the Black Gun Owners Association. Morgan said interest in his group grew so quickly that his website crashed from a surge in online traffic.

“A lot of people are reaching out to us, mainly new gun owners and people who wouldn’t have considered owning a gun or firearm for their protection, have been lining up to purchase firearms and access information from our website.”

Their reasoning has become much harder to ignore, especially as social media sites and phone videos turned into tools of capturing and responding to instances of police brutality. Floyd’s death catalyzed international protest in part for this reason. The video of Ahmaud Arbery, who was killed by white vigilantes in a Georgia suburb garnered similar levels of attention, as did that of Atlanta’s Rayshard Brooks, who was shot in the back by a police officer following a confrontation.

While the vast majority of demonstrators across the U.S. this summer have been unarmed, some have sought to make a statement with their guns. In Stone Mountain, Georgia, an open carry state, at least 150 African-Americans asserted their Second Amendment Right as a tool of protest. Dressed in black and armed with semi-automatic rifles, the group marched through Stone Mountain park to protest its depiction of Confederate generals.

A similar march organized by black gun owners took place in Oklahoma City, Okla. in June, timed to President Donald Trump’s rally in nearby Tulsa. Smith said his organization is not affiliated with such groups but empathizes with their members.

“Any time any community has been pushed and pushed like ours has been pushed, I may not agree with what you do as another organization, but I certainly understand where that stems from,” he said, adding that their efforts were done out of “survival and being able to protect your community.”

Their demonstration and others have drawn the ire of some conservatives. Georgia Sen. Kelly Loeffler decried the “mob rule” in Atlanta during a June 24 interview on Fox News, as the cable network played images of Black protesters carrying semi-automatic weapons. “We’re a nation of the rule of law and this is exactly what will happen if we defund the police,” Loeffler warned.

Her rhetoric echoes that of the White House and other Republicans in Washington, who have taken an increasingly antagonistic tone towards protesters and members of the Black Lives Matter movement over the past month.

Trump has referred to the movement as a “hate group” and repeated talking points in favor of tough policing. The president and his supporters, meanwhile, defended a white St. Louis couple captured on video pointing guns at Black protesters marching by. According to Fox News, the couple told police they retrieved their firearms after spotting armed protesters.

Other members of his circle have taken to calling Black Lives Matter protesters “Marxists” who have been “planning to destroy the police for years.”

Attempts to fan fears of armed, militant Black Americans is not a new political tactic. FBI Director J. Edgar Hoover described the Black Panther Party, which advocated for African-Americans to take up guns as a form of self-defense, as “the greatest threat to internal security of the country” in 1969. Concerns about the group in the late 1960s even prompted the National Rifle Association, no fan of gun restrictions, to partner with then-California governor Ronald Reagan to pass gun control legislation that limited open carry at the state capitol.

Now, as the Trump administration prepares to expand its military presence to major cities, their talking points are turning into policy. Following a week of violent crackdowns on protests in Portland, President Trump announced his plans to deploy hundreds of federal law enforcement agents to Chicago and Albuquerque to “help drive down violent crime.” 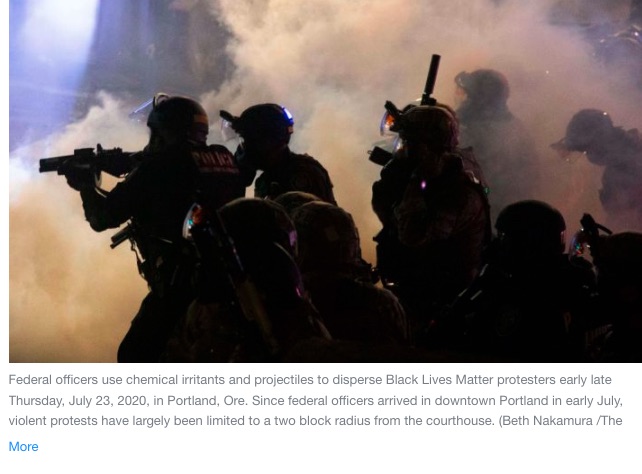 The federal government has also threatened to deploy federal forces in Baltimore, Detroit, New York, Oakland and Philadelphia — all of which have large Black populations.

The White House has specifically cited gun violence in African-American communities and the threat of damage to federal property as an excuse for the increased military presence. And it’s not the first time that government leaders have presented armed African-Americans as a threat: when the Black Panther Party reached its height in the late 1960s, the National Rifle Association, in partnership with then-California governor Ronald Reagan passed gun control legislation that limited open carry at the state capitol.

Black gun owners of this era, however, maintain that their firearm ownership is not evidence of something more sinister, nor is it the violent show of force that some conservatives have made it out to be.

“It’s my constitutional freaking right,” said Kat Traylor, a political strategist and licensed gun owner based in Aurora, Colo. Her city is home to one of the most violent mass shootings in American history.

Traylor said she feels empowered by owning a firearm. At the same time, she is a member of the Moms Demand Action group, which advocates for gun control legislation. In 2018, she helped push through the state’s Red Flag Law that gives judges the power to seize a person’s firearm if they prove to be a danger to themselves or another person.

“We tussled with the idea of having guns in our home because we’ve advocated so many gun rights legislation,” she explained. “We were like, yeah, we need this law because we don’t need guns in the hands of people that are clearly going to hurt themselves or others.”

Traylor is not the only person who has struggled with the implications of owning a gun as a Black American. With shootings on the rise in several American cities, advocates are wary of the trend, saying there isn’t enough evidence to prove that guns will make Black Americans any safer.

“What I really want people to think about is the impact of the presence of guns in Black communities and how there are inherent challenges and more nuanced challenges to saying ‘everyone should arm themselves,” said Amber Goodwin, founder and executive director of the Community Justice Action Fund, which aims to prevent gun violence in communities of color. “Not everyone has access to gun safety. We don’t know how guns can actually make Black people safer in the home or outside of the home.”

Black gun ownership advocates, who prioritize safety and proper training over rushed and potentially dangerous efforts to secure these weapons, say that their growth in numbers sends a powerful message beyond those from Stone Mountain, Oklahoma City, Aurora or any individual city.

“The days are over of African Americans sitting around singing Kumbaya and hoping and praying that somebody will come and save them. We’re gonna save ourselves,” Smith said. “And any politician that wants our vote moving forward, they better be on the side of our thinking otherwise, you’re not gonna get our vote. We’re not gonna be sheep anymore.”