A self-described Ku Klux Klan leader has been arrested for allegedly driving his car into a group of Black Lives Matters protesters gathered on Sunday in the US state of Virginia.

Prosecutors say that Harry Rogers, 36, drove “recklessly” towards a protest in Henrico County, and “revved the engine” before driving into protesters.

Mr Rogers appeared in Henrico court on the outskirts of Richmond on Monday, facing charges of assault and battery.

A hate crime investigation is underway.
One protester was injured and treated at the scene, authorities said, but was not seriously hurt.

Anti-racism protests sparked by the death of George Floyd are entering their third week. Mr Floyd died while being restrained by a Minnesota police officer last month. Large rallies and protests have been held in several US cities, including Richmond, New York, Chicago, and Los Angeles.

Though some protests have involved rioting or looting, and violent clashes between participants and police, an overwhelming majority have been peaceful.

“An attack on peaceful protesters is heinous and despicable and we will prosecute to the fullest extent of the law,” Henrico Country Commonwealth’s Attorney Shannon Taylor said in a statement.

Mr Rogers told officers he was president of the Virginia KKK, the highest-ranking member of the white supremacist group not in prison, US media report.

“The accused, by his own admission and by a cursory glance at social media, is an admitted leader of the Ku Klux Klan and a propagandist for Confederate ideology,” Ms Taylor said. “This egregious criminal act will not go unpunished. Hate has no place here under my watch.” 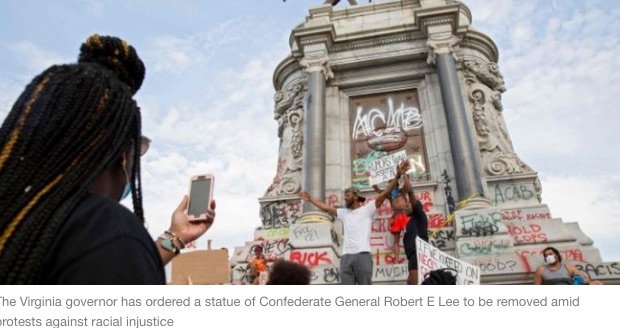 Mr Rogers is expected back in court in August.

Virginia has long been a locus for racial tensions in the US.

Heated debate around Confederate symbols in the state and the statue of Confederate general Robert Lee sparked the 2017 white nationalist rally in Charlottesville, about 80 miles from Henrico.

At that rally, a man drove his car into a crowd of counter-protesters, killing a woman. He was found guilty of murder.

Mr Rogers was also pictured at that white nationalist rally, according to the Guardian.

Last week, amid Black Lives Matters protests over the killing of Mr Floyd, Virginia Governor Ralph Northam announced that a statue of Lee would be removed from the state capital and “immediately” put into storage.