LAPD officers throw black protester from his wheelchair and damage it, video shows

An officer for the Los Angeles Police Department (LAPD), appeared to push a disabled Black Lives Matter protester out of his wheelchair, before one of his colleagues damaged it.

The incident was filmed by a demonstrator at a protest in California on Tuesday and the footage has been circulated on social media.

In the video, the African American man who police later identified as Joshua Wilson, was knocked out of his wheelchair and onto the floor after officers pushed it upside down.

While he was on the ground with one of his legs still in the wheelchair, he attempted to take a baton from one of the officers, while two others tried to hold him back.

As the two officers attempted to detain him, another one dragged the wheelchair away from the protesters and appeared to break one of the wheels in the process. 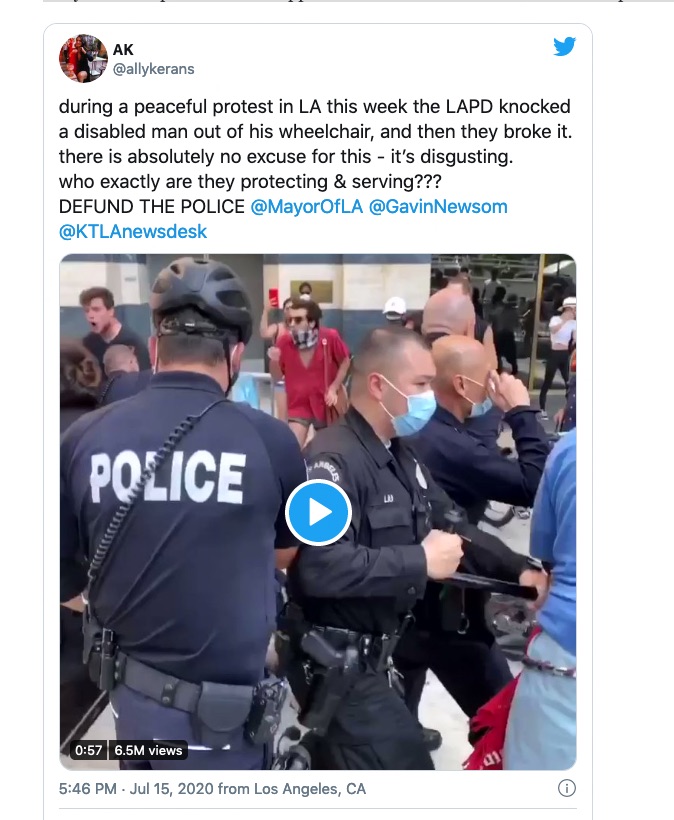 The officers, who were not wearing face masks, then handcuffed Mr Wilson, who could be heard shouting: “They’re trying to kill me.”

There has been greater scrutiny on excessive force used by police in recent months, following the death of unarmed black man George Floyd, while in the custody of a then Minneapolis police officer.

Protests in opposition to police brutality against African Americans have taken place in every state across the US and demonstrators and some politicians have called for nationwide police reform.

In a statement posted to its official Twitter account, the LAPD said that during the demonstration, “50 protesters attempted to interfere with three individuals in police custody.”

They added: “During the incident, a man in a wheelchair, Joshua Wilson, punched an officer in the face. Wilson, a convicted felon, was taken into custody and a loaded gun was found in his possession.”

The LAPD confirmed that two other individuals were also arrested at the protest, “one for battery on a peace officer and the other for a felony warrant.”

In Nigeria, African researchers blaze a trail in virus fight

Pastor and wife jailed after he raped...