London protests: ‘We stopped somebody from being killed’

The individual pictured carrying a white man to safety following a clash between protest groups in London has said he and his friends “stopped somebody from being killed”.

Patrick Hutchinson was widely praised after a photo of him helping the man on Saturday went viral.

Describing the events behind the image, he told the BBC the situation “wasn’t going to end well” without their help.

“I scooped him up into a fireman’s carry and marched him out,” he said.

A number of peaceful anti-racism protests took place in London and other cities across the UK on Saturday.

But groups including some far-right activists also congregated in the capital, and more than 100 people were arrested after violence broke out and police were attacked.

Speaking about the events leading up to the photo, Mr Hutchinson said: “We did what we had to do. We stopped somebody from being killed.” 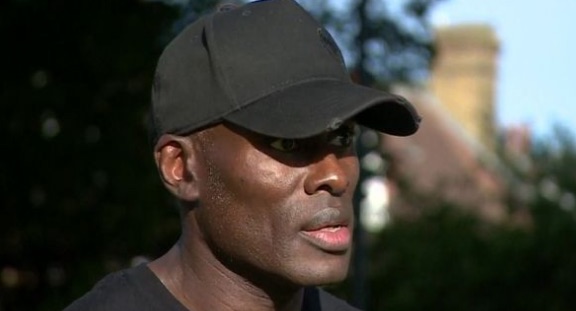 Mr Hutchinson, a personal trainer and grandfather, was with his friends when one of them saw an altercation at the top of the stairs by the Southbank Centre, near Waterloo.

“The guy ended up on the floor and these guys [signalling to his friends] rushed in to stop him from getting trampled.

“In doing so, they created a barrier around him, and I was the last one to come in. I scooped him up into a fireman’s carry and marched him out with the guys around me, protecting me and shielding me and protecting this guy from getting any further punishment.”

He said people were still trying to hit the man as they were leaving the scene.

“I wasn’t thinking, I was just thinking of a human being on the floor. It wasn’t going to end well had we not intervened,” Mr Hutchinson said. “I had no other thoughts in my mind apart from getting to safety.”

Thousands of people have taken to the streets in cities around the world following the death of African American man George Floyd, who died last month as a white police officer knelt on his neck for nearly nine minutes.

Four police officers involved have been sacked and charged over his death.

Mr Hutchinson told Channel 4 News in a separate interview that Mr Floyd “would be alive today” if the other police officers had intervened – as he and his friends did on Saturday.

Pierre Noah was one of those to help Mr Hutchinson during the clash between protesters.

Mr Noah, who works as a bodyguard, told the BBC: “I’m saving two lives right there. I’m saving the man that’s just about to get squashed up and beat up. And then I’m saving those young boys to get a life sentence.”

Ize-Iyamu’s Thinking About Governance Has To Change,...