It might be difficult, but Dallas Mavericks owner Mark Cuban wants white people to talk more about race and privilege in a way that moves the conversation forward.

Cuban, who has been outspoken since the killing of George Floyd in police custody, spoke about the topic at an invitation-only event called “Courageous Conversation” organized by the Mavericks outside their stadium, according to ESPN’s Tim MacMahon. 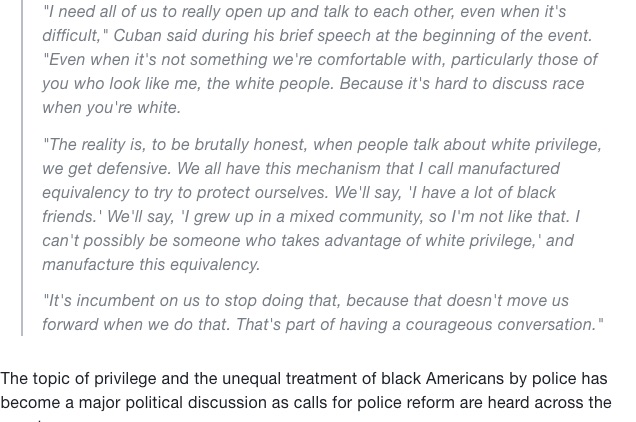 The topic of privilege and the unequal treatment of black Americans by police has become a major political discussion as calls for police reform are heard across the country.

“We need to radically transform the way we do policing in this country and this community,” Jenkins said, adding that he’d recently met virtually with activists who had a list of 10 suggested steps.

Alongside some of his team’s players, Cuban previously made an appearance at a vigil outside Dallas Police headquarters. The billionaire has also toyed with an independent run for president against Donald Trump, whom he has frequently criticized.

Cuban isn’t the only white person in the sports world who has discussed white privilege in the wake of Floyd’s death, as Cincinnati Reds first baseman Joey Votto published an op-ed saying white privilege made him complicit in the death of Floyd.

A removed statue dredges up racism against blacks, Latinos in Texas Rangers’ history

Africa has and will Survive Covid-19 better...