written by Abbie Cheeseman and Adela Suliman and Matthew Mulligan and Tim Stelloh and Micah Grimes and Charlene Gubash and Doha Madani August 4, 2020

BEIRUT — A “colossal” explosion that rocked the port area of Lebanon’s capital on Tuesday, killing dozens and injuring thousands, happened at a warehouse where tons of ammonium nitrate was being stored, the country’s prime minister said.

“I will not rest until we find the person responsible for what happened, to hold him accountable and impose the most severe penalties,” Prime Minister Hassan Diab said.

Diab said it was “unacceptable” that a shipment of ammonium nitrate estimated at 2,750 tons had been in warehouse for six years without “preventive measures” in place to protect it. The chemical compound, which is commercially available, is used widely in fertilizers and explosives.

It wasn’t clear what ignited the shipment, but at least 3,000 people were injured and 50 were killed, Minister of Health Hassan Hamad said at a press conference earlier Tuesday. Those numbers are likely to rise with hospitals filling up fast.

Images and videos on social media appear to show large plumes of smoke and damaged buildings. 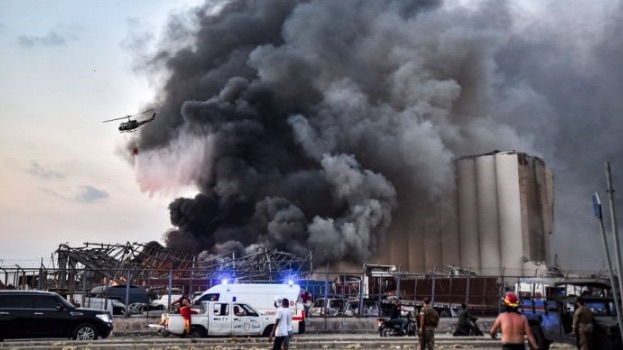 The head of Lebanon’s General Security agency, Maj. Gen. Abbas Ibrahim, who toured the Beirut port to inspect the damage, said: “It is not possible to pre-empt investigations and say that there was a terrorist act.”

Speaking during a coronavirus task force briefing Tuesday, President Donald Trump said the explosion looked “like a terrible attack,” though he offered no evidence and later said that conclusion was based on the presumptions of U.S. generals.

“This was not a some kind of a manufacturing explosion type of event,” Trump said

Lebanon’s National News Agency reported that wheat was being stored in a nearby warehouse. Firetrucks rushed to the scene and evacuation operations were underway, it said. Military and security personnel were also on scene trying to ease traffic to make way for emergency vehicles.

The Lebanese Red Cross also confirmed on Twitter that it had more than 30 teams, including ambulances, responding to the blast and had put out an urgent call for blood donations.

Lebanese President Michel Aoun said on Twitter that the Ministry of Health would meet the expenses of the treatment for the wounded, and that the government would provide shelter and support to displaced families whose properties were damaged in the blast. 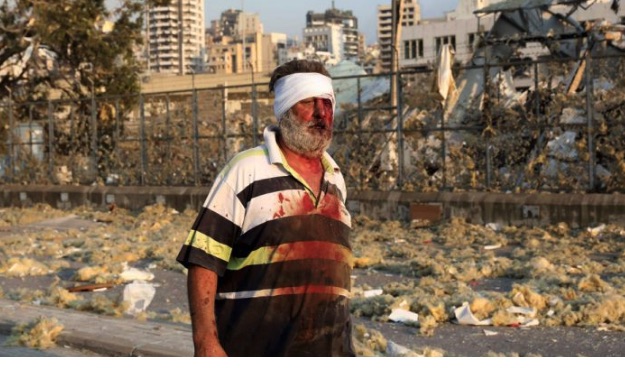 Footage from the Daily Star, a Lebanese newspaper’s offices in the city, appear to show parts of the roof fallen in, blown-out windows and damaged furniture, indicating the strength of the blast. Hours later, the U.S. Embassy warned of toxic gases released by the explosion and told people to stay indoors and wear masks.

An NBC News journalist in the city felt the explosion from her apartment, more than a kilometer from the port, as her windows and doors were blown out, filling the stairwell with thick dust as residents dashed to exit the building.

Dozens of residents, some covered in blood, scrambled to their cars to leave the area for the safety of nearby mountains, a population accustomed to catastrophe.

“It’s like Hiroshima,” Beirut Mayor Jamal Itani told reporters. “There is lots of destruction and the wounded are lying in the streets.”

Another NBC News journalist said the blast was “colossal” and could be felt miles away as it rippled through the capital, leaving a trail of destruction behind.

In an interview with NBC News, Aly Sleem, 34, who was driving in a neighborhood near the explosion when it occurred, said he heard what sounded like two blasts.

“The second one was really horrible,” he said. “You couldn’t even breathe.” 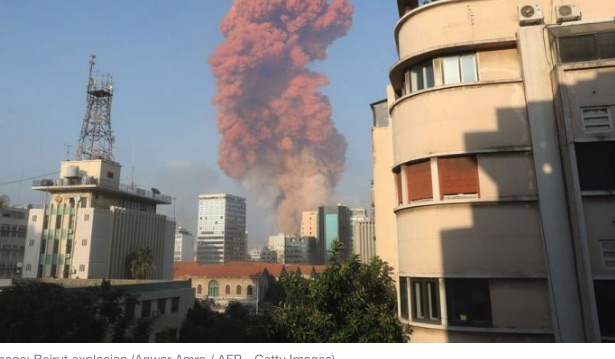 A journalist who recorded the secondary explosion, Ahmad Yassine, 30, captured what appeared to be a mushroom cloud rising from the building.

Yassine was having lunch a few kilometers away at the time, and in a video that he tweeted, a loud blast followed by screams can be heard moments after the cloud dissipates.

At first, Yassine said in an interview, he didn’t know if he was still breathing.

After the sun set in Beirut, parts of the city remained without power, said Joelle Bassoul, a regional content manager for Amnesty International.

Bassoul, a former journalist who covered the country’s civil war from 1975 to 2000, said the “sheer scale of fear and panic” that she saw in the streets reminded of her that period.

The National News Agency also reported that Prime Minister Hassan Diab and other ministers were at the site, inspecting damage from the blast.

A U.S. State Department spokesperson said it wasn’t clear if any Americans were injured or killed in the explosion.

“Having witnessed the horrific explosions at the Port this evening, our heartfelt sympathies go out to the victims and their families,” U.S. Ambassador Dorothy Shea said in a statement. “We mourn each loss from this terrible tragedy alongside the Lebanese people.”

Israel’s Foreign Minister Gabi Ashkenazi told a local television channel that it was too early to speculate on the causes and that there was no reason to believe it was not an accident. 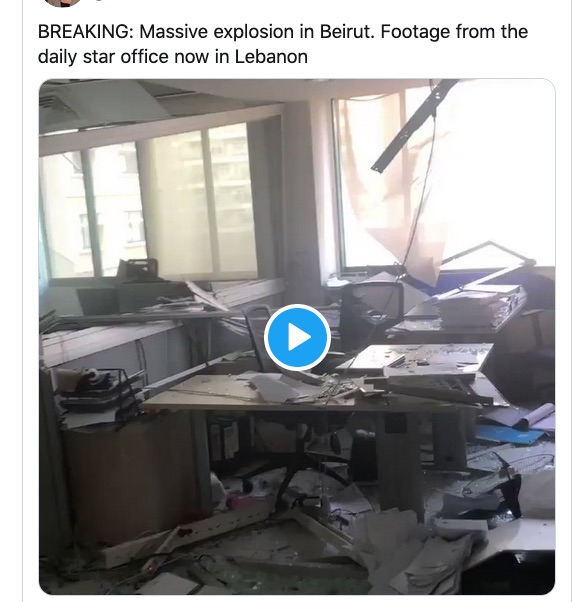 Blast comes while Lebanon contends with other crises

Lebanon is in the midst of a number of social and political crises.

On Friday, the country is bracing for a U.N.-backed court to deliver a verdict on the death of former Prime Minister Rafik Hariri, who was killed by a truck bomb in 2005, sending the country’s fragile political system into turmoil.

It is also grappling with the coronavirus pandemic and a spiraling economic crisis, the most severe in its modern history, that has pushed many Lebanese people to protest in the streets this year, as unemployment soars.

A Republican senator question whether  Black people are...