Mississippi Lawmakers Push Ahead With Proposal to Take Down State Flag

Coaches, athletes, country music stars and the Baptist Convention have called for changing the flag that symbolizes the state’s Confederate past.

JACKSON, Miss. — A flag stamped with a defiant tribute to Mississippi’s Confederate past has been raised on the grounds of the State Capitol for well over a century.

It flew when the Civil War was not yet distant history and when segregation was fiercely enforced by law. Through the fight for civil rights and after remnants of the Confederacy were toppled elsewhere in moments of inflamed racial tension, the flag endured.

But on Saturday, as the state flag embedded with the blue bars and white stars of the Confederate battle flag flapped from its pole in front of the Capitol, lawmakers gathered inside to wrestle over whether to retire it to history.

Both chambers of the Republican-led Legislature voted, with the support of supermajorities, to push ahead with legislation that would remove the flag and lay the framework for replacing it.

The debate among lawmakers and across the state has been laced with passion, weighted by the generations of pride and pain the flag has long represented. It was in many ways a familiar discussion, one rehashed through decades of disagreement.

Yet as the flag was swept up in the broader convulsions over racial history that were unleashed by the death of George Floyd in the custody of the Minneapolis police, there was a growing sense that this time was different.

The flag, the only state banner left in the country with an overt Confederate symbol, has been the target of opposition that crosses racial, partisan and cultural divides.

The Mississippi Baptist Convention has called for it to be taken down. So have state associations of real estate agents, bankers, educators and manufacturers. A star football player at Mississippi State University declared that he would not play as long as the flag remained, and Kermit Davis, the University of Mississippi’s men’s basketball coach, stood with other coaches under the Capitol rotunda and said changing it was “the right thing to do.” 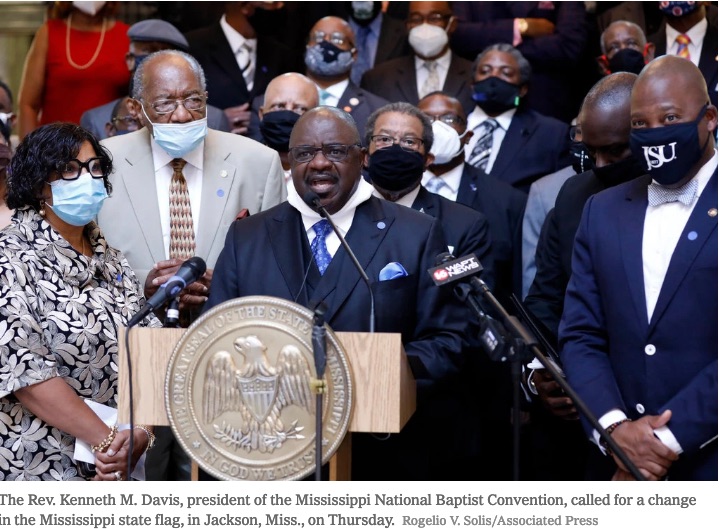 “I understand many view the current flag as a symbol of heritage and Southern pride,” the country music star Faith Hill, a Mississippi native, said in a post on Twitter, “but we have to realize that this flag is a direct symbol of terror for our black brothers and sisters.”

Some have framed the debate in moral terms, arguing that the flag stands in the way of scabbing over the wounds left by the past. Yet the latest efforts for change have gained momentum in large part because of economic considerations, with business and industry leaders saying that the flag discourages the investment needed to boost one of the poorest states.

The financial threat had been underscored by recent announcements by the National Collegiate Athletic Association and the Southeastern Conference that Mississippi would be precluded from hosting championship events until the flag is changed.

“Because of the N.C.A.A. and the SEC, we can point to a quantifiable damage, if you will, that is occurring — a consequence, a punishment,” Philip Gunn, a Republican who is the State House speaker, said in an interview on Friday afternoon.

Still, the growing calls to change the flag belie the extent of the division that still exists over the banner and how to interpret the legacy it symbolizes. Various polls show that, even as the number of people supporting a change has increased, nearly half of the state is resistant to the idea.

Many remain attached to the flag because they see it as an enduring recognition of the blood shed by their ancestors who fought for Mississippi and their pride in the state’s history.

“We firmly believe that this political correctness, this movement we are sensing out there right now to delegitimize our American institutions and our American history is a movement that’s incredibly dangerous and cannot be appeased,” said Chris McDaniel, a Republican state senator.

State lawmakers extended their session that had been set to end on Friday, paving the way for a vote this weekend.

Legislation proposed on Saturday would abolish the old flag and create a commission that would design a new flag that would be forbidden from having the Confederate battle emblem and must include “In God we trust.” The commission would be charged with arriving at a design that would be up for a vote on the November ballot.

One popular alternative has 19 stars encircling one larger star, an acknowledgment of Mississippi being the 20th state to join the union. That design had been known as the Stennis flag until its designer took her name off it because she is a descendant of a longtime senator who supported segregation.

Gov. Tate Reeves, a Republican, said on Saturday morning that he would sign a bill to change the flag. The announcement signals a marked evolution in the governor’s thinking on the subject, as he had previously said that any decision over changing the flag should be made directly by voters, not lawmakers. 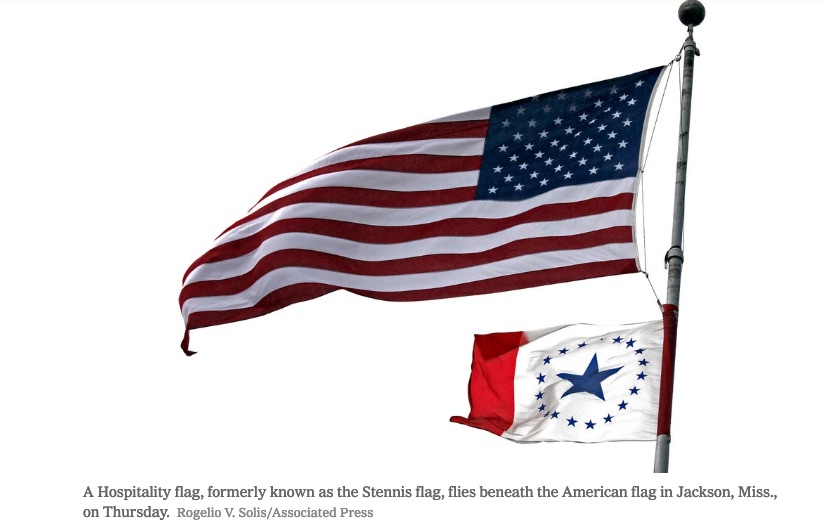 “The legislature has been deadlocked for days as it considers a new state flag,” Mr. Reeves said in a statement. “The argument over the 1894 flag has become as divisive as the flag itself and it’s time to end it.”

Mississippi has grappled over the flag for decades, yet that banner continued to maintain considerable public support.

During a 2001 referendum, voters overwhelmingly decided to keep the flag as it was. Five years ago, after a white supremacist killed nine African-American worshipers in a Charleston, S.C., church, efforts to change the Mississippi flag were reinvigorated as monuments to the Confederacy were being brought down across the South, and as battle flags were lowered on statehouse grounds in Alabama and South Carolina.

Although the efforts then failed to officially change the flag, many cities moved on their own to take down the flag and all eight of the state’s public universities lowered it on their campuses.

“Mississippi has been on the cusp of change for a long time,” said Mike Espy, a former congressman and secretary of agriculture running as a Democrat for a United States Senate seat. “It’s a remnant of a bleak past, a remnant of the days when human beings were allowed to own human beings.”

“It just dredges up all those feelings for me,” he added. “I don’t feel anger. I’m just disappointed its still there.”

There were signs that the argument that had long prevailed — that changing the flag undermined a heritage embraced by much of Mississippi — was being overshadowed as lawmakers have begun to acknowledge the unsavory history it symbolized for many others.

As a cascade of lawmakers from both parties indicated in recent days that they were in favor of a change, many said that moving away from the old flag had become inevitable.

In 2017, Karl Oliver, a Republican state representative, was roundly criticized after a post on Facebook in which he lamented a move by city officials in New Orleans to take down Confederate monuments and said its proponents should by “lynched.”

“The destruction of these monuments, erected in the loving memory of our family and fellow Southern Americans,” he said in the post, “is both heinous and horrific.” (He later apologized.)

On Thursday, Mr. Oliver said the time had come for a Mississippi flag that “creates unity.”

“When my grandchildren and their children are studying this time in history, there will be questions,” he said in a statement. “I want them to know that it was because of my love for them and Mississippi, and Christ’s love for me, and for my fellow Mississippians, I based my decision on what I believed to be best for everyone.”