NEW YORK (AP) — Major League Baseball players have the option of having a patch with ”Black Lives Matter” or ”United For Change” on a jersey sleeve on opening day of the pandemic-delayed season, and Washington Nationals pitcher Sean Doolittle says his team may is considering whether to take a knee in support Thursday night.

”I’ve been considering it, especially here over the last week. But as a team, we’re having conversations in our clubhouse over the last two days. I know the Yankees are doing the same thing,” he said Wednesday. ”I think it’s really important for for us as a league to echo what other sports leagues have done so far. We’ve seen the MLS. We’ve seen NASCAR. We’ve seen Formula One make really powerful statements.”

Teams have the option of stenciling an inverted MLB logo with ”BLM” or ”United for Change” on the back of the pitcher’s mound during opening weekend games. Washington opted for the MLB/MLB stencil.

”It’s freedom of speech. It’s the Bill of Rights. It’s what the country’s founded on, to be able to express yourself freely. So I I think it’s a wonderful thing,” said Gerrit Cole, who makes his Yankees debut against Max Scherzer in the opener at Nationals Park.

After discussions among the commissioner’s office and the Major League Baseball Players Association, The Players Alliance and individual players, each player may use a wristband with an inverted MLB logo in which the silhouetted batter is black, the first use of such a logo.

Each player also may use a Black Lives Matter batting practice T-shirt or a T-shirt designed or obtained by the player or his team.

MLB is lifting cleat restrictions for this season, giving players the ability to put messages for social justice and causes on their spikes.

Jersey patches would go on the left sleeve unless a team has an existing patch there, in which case the new one would go on the right sleeve. The special patches will be used Thursday and Friday.

The initiatives that start Thursday were designed to allow players to show support for social justice generally, and diversity and inclusion in baseball. They were deliberately made flexible, allowing players to make individual decisions.

T-shirts with the messages and the special wristbands may be used for the entire season.

When the English Premier League resumed last month, player names were replaced with ”Black Lives Matter” during the opening games.

In addition, the Nationals will have a black heart in center field with ”D.C.” in the middle. The heart is meant to show support for the D.C. community, the Nationals said.

MLB said that since the death of George Floyd on May 25 it had enhanced existing partnerships with the Jackie Robinson Foundation and the Negro Leagues Baseball Museum and also made new investments in the NAACP Legal Defense and Education Fund and launched a Diverse Business Partners Recovery Project.

Yankees general manager Brian Cashman met with Black minor league players who were at the team’s complex in Tampa, Florida, to initiate discussions.

”Start the communication of what can be done better, how can we be a part of a more positive change?” he said. ”There was very difficult conversations, real personal stories that were shared.”

He continued those talks when the big league roster reported to New York. Cashman supports the expressions of protest.

”Our country is in many ways the greatest country in the world and in some ways, it’s broken in certain aspects, that we’re not all together and not all as one as we should be,” Cashman said. ”And because of that you’re seeing demonstrations like kneeling at the anthem as part of that process because part of our community is hurting when it shouldn’t be. And if it’s been ignored for such a long period of time and it’s not been addressed as well as it should have been or could have been, then the great part of America is there’s different ways to express yourself and different platforms to utilize how you express yourself. and in some cases that happens to be kneeling during the anthem.” 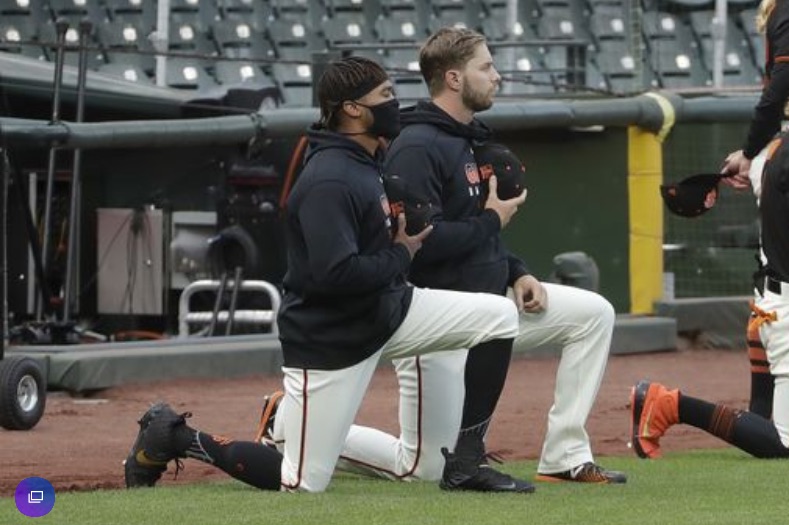 As Biden says four Black women are on his VP list, here’s who he could choose

American exceptionalism was our preexisting condition

Black Families Came to Chicago by the...

Africans In Ukraine are Facing Racism and...