More than 70 former Republican national security officials, including some former members of the Trump administration, came out in support of Joe Biden’s bid for president Thursday, according to an open letter that also offered a scathing rebuke of President Donald Trump‘s first term in office.

“We are profoundly concerned about the course of our nation under the leadership of Donald Trump,” the officials wrote. “Through his actions and his rhetoric, Trump has demonstrated that he lacks the character and competence to lead this nation and has engaged in corrupt behavior that renders him unfit to serve as President.”

“Donald Trump has gravely damaged America’s role as a world leader,” the first point in the letter says. Other items include declarations that Trump is “unfit to lead during a national crisis,” “solicited foreign influence,” “aligned himself with dictators,” “disparaged our armed forces, intelligence agencies, and diplomats,” “undermined the rule of law,” “dishonored the office of the presidency,” “divided our nation,” “attacked and vilified immigrants” and “imperiled America’s security.”

“While we – like all Americans – had hoped that Donald Trump would govern wisely, he has disappointed millions of voters who put their faith in him and has demonstrated that he is dangerously unfit to serve another term. In contrast, we believe Joe Biden has the character, experience, and temperament to lead this nation,” the letter reads. 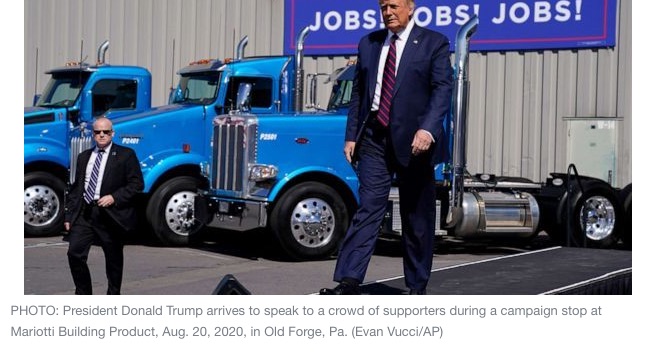 One of the former officials who signed the letter told ABC News that she hoped Trump would rise to the occasion of being president, but in her view, he did not.

“Many of us hoped that Trump, like those before him, would rise to the honor of the office. That the mantel of leadership would weigh heavy on him and lead to a change of behavior. That perhaps the tweeting, the bullying, the coarse language would be set aside behind closed doors and that he would treat the office with the dignity and gravity it deserves. That did not happen,” Elizabeth Neumann, former assistant secretary of Homeland Security told ABC News.

“[Trump’s] leadership style is chaos; and if you study him — this is a style that he has used for decades in business,” she added. “But chaos at the top of our federal government leads to chaos throughout the government. Some see this as a way to weaken the so-called ‘deep state’ — but what it actually does is weaken our security agencies’ ability to secure and protect our nation. The botched COVID response is merely the latest example — but also one of the gravest with the cost being American lives.”

The Trump campaign did not immediately comment on the letter.

“Donald Trump’s four years in the White House have left America isolated abroad, our alliances in tatters, and autocrats like Xi and Putin emboldened,” Biden campaign spokesperson Michael Gwin said in a statement. “This endorsement is a clear sign of both how weak Donald Trump has left the United States globally, and of Vice President Biden’s unique ability to pick up the pieces next January by rebuilding critical relationships and standing up for American values and interests against the adversaries that Trump has coddled.”

Earlier this week, the former Department of Homeland Security chief of staff under former Secretary Kirstjen Nielsen, Miles Taylor, came out in support of Biden.

“Given what I’ve experienced in the administration, I have to support Joe Biden for president,” Taylor said in a video posted and produced by the group Republican Voters Against Trump. “And even though I’m not a Democrat, even though I disagree on key issues, I’m confident that Joe Biden will protect the country, and I’m confident he won’t make the same mistakes as this president.”

Acting Secretary Chad Wolf blasted Taylor in a statement, accusing him of reversing course for “five minutes of fame.”

COVID-19 is deadlier for black Brazilians, a...