House Speaker Nancy Pelosi’s daughter Alexandra handed President Donald Trump a water bottle in the White House without anyone checking it for contamination, according to a new book about the president.

Alexandra Pelosi was directing a film at the White House when the incident happened six weeks after Trump was sworn in, the book, titled “A Very Stable Genius,” said, according to an excerpt of it published in Vanity Fair.

Pelosi, who had been to the White House before, said it was highly unusual for her to witness such a lax security system.

The daughter of House Speaker Nancy Pelosi was able to hand a bottle of water to President Donald Trump without having anyone check for contamination, according to a new book about the White House.

An excerpt from “A Very Stable Genius,” written by the Washington Post journalists Philip Rucker and Carol Leonnig, highlighted a glaring security lapse in the White House that took place six weeks after Trump’s inauguration. Vanity Fair published the excerpt on Monday.

Alexandra Pelosi had been directing the filming of a documentary inside the White House on March 1, 2017, when the president appeared, the book said.

Trump had asked for a bottle of water during filming, but in the absence of a staff member to give him one, Pelosi took out a bottle of Aquafina from her purse and handed it to him, the authors said.

To her shock, there were no checks or protocols, the book added.

“I’ve been to the White House,” she told Rucker and Leonnig. “There are always protocols. Here there were no rules, no protocol.”

She added: “There’s so much wrong with the whole thing. I’m thinking, Isn’t there someone who’s supposed to guard what he’s eating and drinking?” 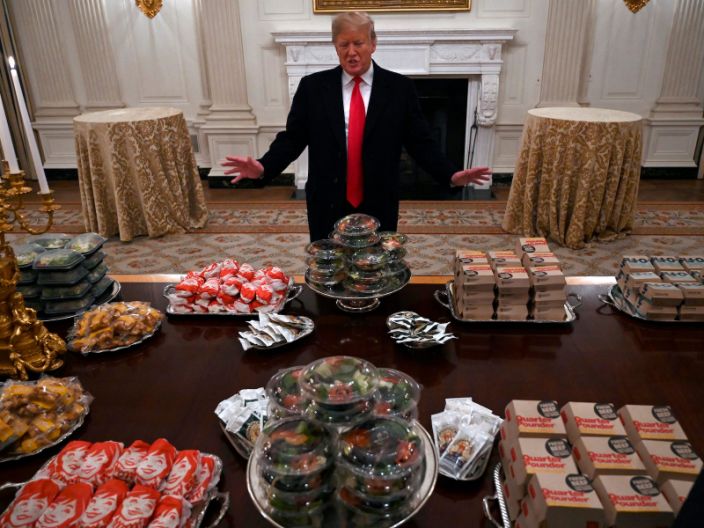 The incident appears to be another serious security lapse in the president’s entourage.

Earlier this month, a US Marine was charged with impersonating a law-enforcement officer and entering a zone around a private terminal used for the president’s flights in Florida, Business Insider’s David Choi reported, citing court documents.

In September, a 33-year-old Chinese national named Yujing Zhang was convicted of trespassing on Trump’s Mar-a-Lago resort in Palm Beach, Florida, while carrying electronic devices, passports, and a thumb drive.

Rucker and Leonnig’s book also details a July 2017 meeting in which Trump called top national-security officials “losers” and “dopes and babies” after they tried to teach him the basics of US diplomacy.

África’s Richest Woman’ Out of Davos Well Before Report

Thousands of US law enforcement personnel including...