Nigeria’s army has promised to “maintain law and order” as protests against police brutality continued for the eighth consecutive day on Thursday.

Flag-waving crowds headed towards the national assembly in the capital, Abuja, as people gathered again to block traffic on key roads in the largest city, Lagos.

The army released a statement as demonstrators took to the streets to keep up pressure in a campaign that forced the government to announce the dissolution of a notorious police unit, the Special Anti-Robbery Squad (SARS).

The military warned “all subversive elements and troublemakers” and said it “remains highly committed to defending the country and her democracy at all cost”.

The Nigerian army added it “is ready to fully support the civil authority in whatever capacity to maintain law and order and deal with any situation decisively”.

Protests have been largely peaceful but Amnesty International said at least 10 people have died and hundreds were injured in the face of an initial harsh response by police in some locations.

The demonstrations have drawn thousands of mainly young protesters onto the streets and online in the most concerted show of people power in years.

The government has been forced into rare concessions by the protests and promised a raft of measures to try to appease the popular ire.

The country’s police chief announced on Tuesday the SARS unit was being replaced by a new SWAT outfit, but protesters were quick to reject this and push for more sweeping change.

In response, the Nigerian police insisted no members of the former unit would be eligible for the new one, promising its officers will be “barred from indiscriminate and unlawful searches”.

Despite the commitment to reform, Amnesty said the violent response by law enforcement to protests undermined the promises.

“Nigerians are sceptical of authorities’ pledge to end police atrocities because the past claims of reforming SARS have turned out to be empty words,” said Osai Ojigho, the director of Amnesty International Nigeria.

“That police are still using excessive force on peaceful protesters – leading to injuries and deaths in Lagos, Ughelli, Abuja and Ogbomosho – throws through the window claims of any commitment to ending violations of human rights by Nigeria police,” he said. 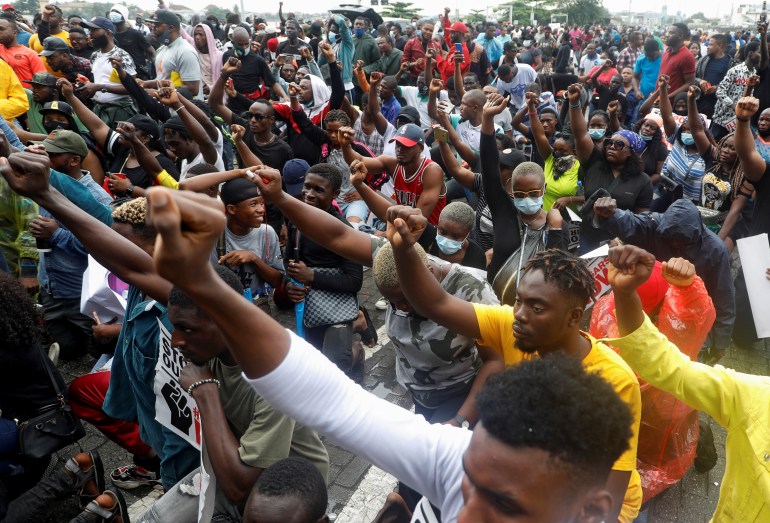 Millions Wait for 5-10 Hours Just to Vote in  Bannana Republic of America.  Legacies of Racism in America’s Democracy

Half a Year After Trump’s Defeat, Arizona...