Before Edafe Okporo founded New York City’s first and only shelter for asylum-seekers and refugees, he was wandering the streets of Elizabeth, New Jersey, a refugee with nowhere to go. Although he was homeless, Okporo was happy to be in the United States.

“Everything just changed when I stepped my feet into this country,” said Okporo, 30, an LGBTQ activist who fled his homeland, Nigeria, in 2016, “because there is an opportunity to dream of a better future, to have a path here as a gay man.”

Okporo grew up in Warri, a city in southern Nigeria. Not only was he poor growing up, but he also struggled with his sexuality. When high school classmates discovered that Okporo was interested in boys, he said, they outed him to his parents, who made him undergo conversion therapy. 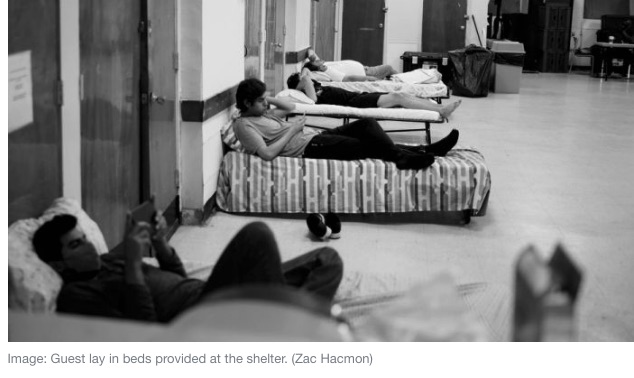 Later, while attending college in Enugu, Nigeria, he arranged a meeting with a man he had met through a dating website. What he thought was a date, he said, turned out to be a “siege.” Once he was inside the man’s apartment, he said, a group of men jumped out of a closet and held him hostage while they stole money from his bank account.

Nigeria, a former British colony that gained independence in 1960, is one of 68 U.N. member states that criminalize homosexuality, according to the International Lesbian, Gay, Bisexual, Trans and Intersex Association.

Many such laws are thought to be rooted in the British Empire: According to a report published in the Cambridge Review of External Affairs in 2014, former British colonies are “much more likely” to criminalize same-sex acts than other countries. Since 1999, however, some parts of northern Nigeria that are governed by Sharia law punish homosexual activity with “caning, imprisonment or death by stoning,” according to Human Rights Watch.

Traumatized by the attack, Okporo spent the rest of college forcing himself to date women. He joined a church and even became a pastor. But after he graduated in 2014 — the same year Nigeria made same-sex relationships punishable by up to 10 years in prison — he decided he could no longer live a lie. He moved to the Nigerian capital, Abuja, where he helped found the International Centre for Advocacy on Right to Health, an LGBTQ rights organization and HIV clinic.

But Okporo’s activism made him a target. One night in 2016, alone in his apartment, he was startled awake by a loud noise. A mob, he said, was ramming down his door. They rushed in, dragged him into the street and beat him unconscious. Some good Samaritans found him, saw his ID card and carried him to the clinic where he worked.

“When I woke up in the clinic, I knew I had to leave Nigeria for me to be safe,” he said.

After fleeing to Dubai and then returning to Nigeria, he obtained a visa to attend the International LGBTQ Leaders Conference, organized by the Victory Institute, in Washington D.C. — a chance to seek asylum in the U.S., where same-sex marriage had recently been legalized and which he pictured as “a very accepting place.” 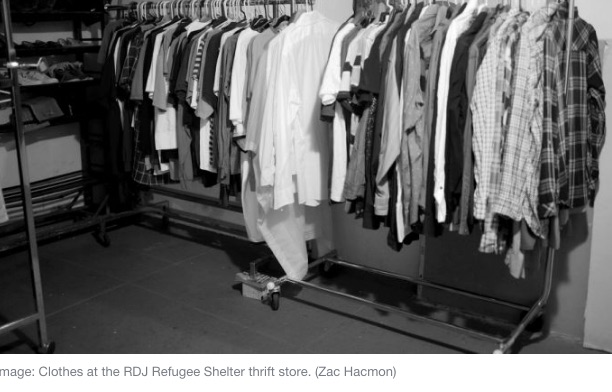 That image, he said, turned out to be different from the reality. Okporo approached an admission officer at New York’s John F. Kennedy Airport and explained that he was seeking asylum. He said the officer took him to an airport jail cell, where he was forced to sign deportation papers.

“The officer came and he put handcuffs on me,” Okporo said, “and drove me to the detention center in New Jersey.”

Okporo would spend five harrowing months in a detention center in Elizabeth. Immigration Equality, a group that advocates on behalf of LGBTQ and HIV-positive immigrants, connected him with a lawyer who helped him fight deportation in court. After winning his case, he was released from detention, but he had nowhere to go.

His only resource was a phone number advertised on a flyer tacked to the wall of the detention center. The number belonged to First Friends of New Jersey and New York, an organization that supports detained immigrants and asylum-seekers.

A volunteer picked Okporo up and drove him to a YMCA shelter in Newark, New Jersey. He used a computer at the public library to connect with a former colleague from the International Centre for Advocacy on Right to Health, who was living in Queens, New York. She agreed to let him stay with her for three months while he found work, first at a New Jersey-based catering company and then at a nearby HIV clinic.

But Okporo wanted to do more to help asylum-seekers and refugees like himself. He persuaded the leaders of the RDJ Refugee Shelter in Harlem — named after homeless advocate Robert Daniel Jones — to turn the shelter into a full-time transitional refuge for migrants fleeing violence and persecution abroad.

Housed in a former church, the shelter is New York City’s only full-time refuge for asylum-seekers and refugees. The 10-bed shelter has provided temporary housing for more than 80 migrants, said Okporo, the shelter’s director. The shelter also provides legal counseling and job assistance.

The number of refugees in the U.S. is the lowest since 1980, according to the Pew Research Center. The Trump administration last year capped the number of refugees permitted into the U.S. at 18,000, down from 30,000. The administration also enacted a rule last year that prevented immigrants from claiming asylum in the U.S. if they did not first try to claim it in a country they passed through on their way to the U.S. border.

Late last month, a federal judge ruled that the restriction was illegal. However, a newly proposed rule would allow the Trump administration to deny asylum to immigrants who are considered public health risks because of the COVID-19 pandemic.

Under those restrictions, Okporo said, asylum-seekers would face more barriers coming to the U.S. than ever before. 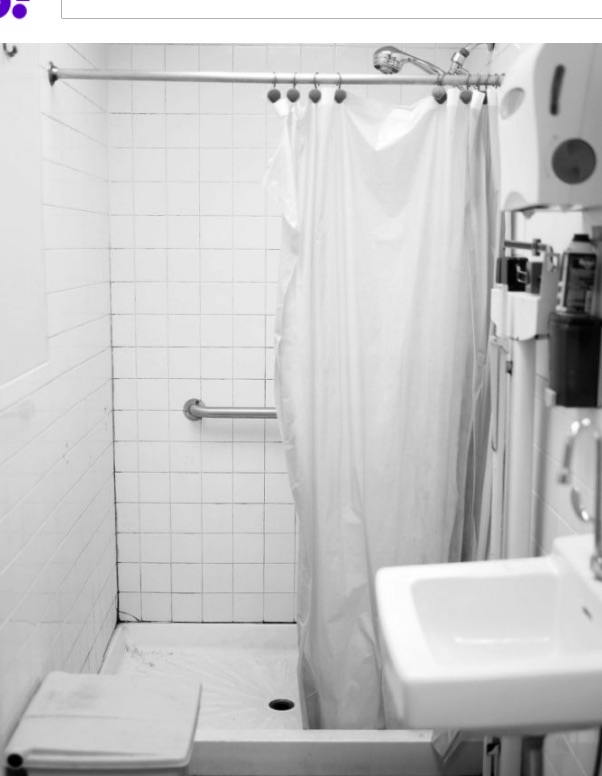 “The pandemic has given the administration an opportunity to really close the door for a lot of the refugees and asylum-seekers who usually expect America to be that place of safety when they think about fleeing their countries,” he said.

Not everyone fleeing homophobic and transphobic violence abroad is from a country that criminalizes homosexuality, he said, noting that a majority of those housed in the RDJ Refugee Shelter who have received asylum are from Honduras and Jamaica. While sex between men is outlawed in Jamaica, same-sex activity is legal in Honduras. Still, LGBTQ migrants, particularly those who are transgender, face widespread persecution in both countries, Okporo said. Many non-LGBTQ migrants, he added, are fleeing war-torn regions.

All too often, LGBTQ asylum-seekers who make the journey across the border end up homeless, he said, because family and friends with permanent residence in the U.S. will not open their doors to them.

“Most of them face a kind of rejection even from their community in New York,” Okporo said. “The shelter provides them that space to be themselves even in New York City.”

Okporo, who has a degree in food science, considers himself lucky. Many asylum-seekers do not have the education or proper documentation to qualify for jobs or shelter, he said. Transgender asylum-seekers and refugees in the process of transitioning are especially vulnerable, he said, because they often lack documentation and frequently experience discrimination and violence in shelters.

“Knowing that New York is one of the most liberal places in the world and people are still subjected to such kind of persecution just makes me wonder where else in the world can LGBTQ migrants be safe,” he said. 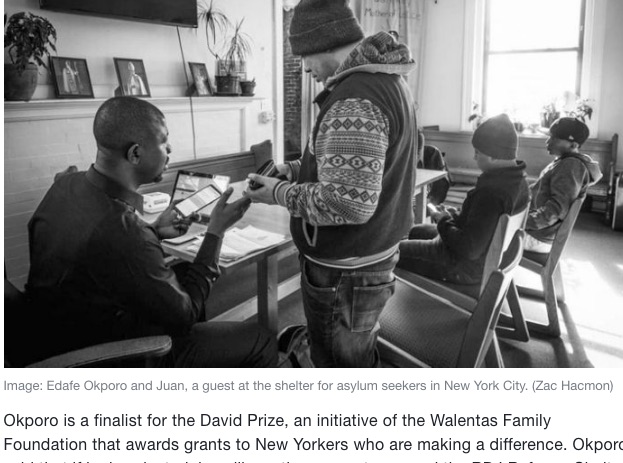 Okporo is a finalist for the David Prize, an initiative of the Walentas Family Foundation that awards grants to New Yorkers who are making a difference. Okporo said that if he is selected, he will use the money to expand the RDJ Refugee Shelter, which subsists largely on grants and donations. He would also train faith leaders around New York City to use their churches, mosques and temples as places of refuge for migrants fleeing violence and persecution.

Okporo no longer feels the need to hide who he is.

“I have wanted to be open about my sexuality all my life,” said Okporo, who is unashamed to hold hands with his boyfriend, Nicolas, when they walk the streets together. “There is no way I’m going to hide it.”

In June, for the second year in a row, Okporo shared his story during NYC Pride’s annual LGBTQ celebrations, which this year were virtual. He has also written a book, “Compassion is Worth More: Using Your Civil Power to Create Change.” He said it is important for people to listen to the struggles of LGBTQ migrants, who are unable to vote, and to understand that the fight for civil rights did not end with marriage equality.

“When I came to the U.S., I discovered that some states, they have laws that permit conversion therapy. I was shocked. … In the U.S., I thought that gay marriage had eliminated such kind of struggles,” he said.

“A lot of gay people in America after gay marriage think that it is over,” Okporo added. “It’s not over.”

SHOT FIRED IN LOUISVILLE! AMERICA ON THE VERGE OF RACE WAR.

The Rise of Racism in Europe and...